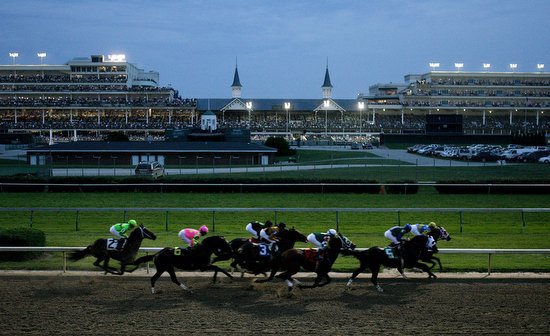 Churchill Downs ran a stand-alone card to kick of the spring meet on Saturday. Here’s what we learned about the track ahead of Kentucky Derby 148.

Much of the “Downs after Dark” card was conducted over perfect conditions. The rains held out until a weather delay prompted an off surface at the very tail end of the card.

It is far too early to establish any meaningful trends from such a small sample of races, but paying attention to what is happening, can help identify things that handicappers betting on the Derby will be unaware of.

If the track was fast it didn’t matter if the race was short or long, the 1 and 5 post positions accounted for every winner.

It is interesting that every sprint race longer than 6 furlongs was won by the #1 horse while the two 6 furlongs contests were won by the 5 post. Was this coincidence or an indication of bias? This may be an important distinction moving forward. When racing resumes ahead of the Kentucky Derby, players would be wise to see if the trend of inside posts (1-3) continues to hold up in the slightly longer sprints while middle positions hold up for those races contested at 6 and ½ furlongs or longer.

For the most part you wanted to be forwardly placed regardless of distance. The one horse to win as a deep closer was in the 10 furlong contest. This is the race that is the same distance as the Kentucky Derby and is often further than a lot of horses want to go. My best guess as to why such a deep closer won was that too many of these horses ran too fast early at a distance that is a bridge too far.

In general, I would throw race 6 out and say that the fast dirt track is heavily preferred to horses near the lead. Not many were able to wire the field so it may suggest that second flight may be the one to produce the most winners this meet.

There was a nice balance of win odds in the race. Favorites won at a reasonable clip against the expectation of winning 30%. Another 50% of the fast dirt races were won by horses in the 2nd-4thranking spots. In general studies have shown that the top 5 runners typically account for roughly 80% of victories. The final 2 races were won by rank outsiders.

This distribution suggests that all horses are logical players if you can make a case for them.

The winners of these races came from three circuits. Turfway Park had an incredibly good showing producing winners and a number of underneath spots as well. This could potentially upgrade horses in the Kentucky Derby who ran in the Jeff Ruby Stakes which is typically considered an extremely weak prep race.

The other 2 venues to produce winners were Keeneland and Fair Grounds. This could potentially mean upgrades for horses who prepped in the Lexington, the Blue Grass, and the Louisiana Derby.

While it won’t impact the Kentucky Derby at all, Churchill Downs returned to the turf on Saturday. They had not run any turf races during the previous meet as it was undergoing a massive transformation which included the removal of the crown and a new grass mixture. The project was overseen by officials from Royal Ascot which runs one of, if not the, most prestigious turf racing venues in the world.

As a horseplayer looking for trends can be a helpful way to go beyond the past performances and separate yourself from a large portion of the parimutuel market. However, reckless declarations of biases can be extremely detrimental to your bottom line.

Based on the fact that only 2 races were run and they were at dramatically different distances, it would not be prudent to take any meaningful information out of these races.

Following the 8th race weather moved into the area and forced a weather delay before the final two races could be contested. When the horses took back to the track the condition had changed from fast to muddy and sealed.

Often times this change can result in more favorable front running biases because the sealing of the track requires it to be tightly packed so that moisture doesn’t get into the base layer. While we might find it difficult to run in, horses can skip over the track more easily making it difficult for runners form the back to make up ground.

Potential Trends in the Slop at Churchill Downs

Once again, we are dealing with a very limited sample size in off track races. One of the races also scratched down to a field of five making some of our data unreliable. For example, both races were won by horses in the inside posts (1-3) but given that there were only three horses in one of the races that was guaranteed to be the case for at least half of the races in the data set.

There is potential rain forecasted for Kentucky Oaks and Derby day at this time, so it is almost unfortunate the rains didn’t come in sooner to give a better idea of what to expect should we get yet another sloppy Kentucky Derby.

Get your brown paper bag ready because Monday will begin the hyperventilation of Kentucky Derby analysis. Churchill Downs will host the event via livestream which can be found here beginning at 2 pm Eastern.

As soon as posts are made available a morning line will be set and players can begin upgrading and downgrading horses based on their starting positions. Betting News will have Oaks and Derby coverage all week long to help you with your handicapping selections ahead of the marquee weekend in racing.

The 2022 Formula 1 season is only six races deep, but the race for this season’s championship alerady appears to be down to just two drivers. Last season, Red Bull driver Max Verstappen claimed his first Formula 1 World Drivers’ Championship in highly controversial circumstances, with Lewis Hamilton denied what would have been a record-breaking END_OF_DOCUMENT_TOKEN_TO_BE_REPLACED