Breeders Cup 2018 : Picks for the BC Mile at Churchill Downs 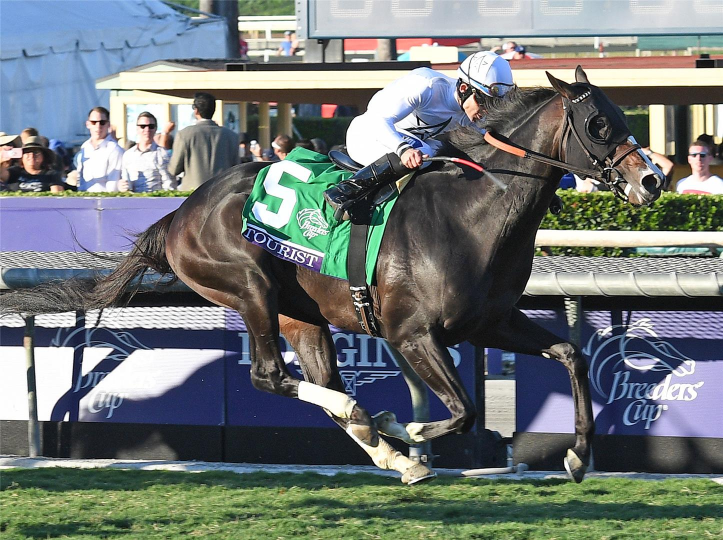 The Breeders’ Cup Mile is, a Mile duh, but run on the turf so we have a lot of top international horses taking a crack at glory today.

There is not a ton of early speed so being placed closed to the leader should help but class is still the most important factor on the grass.

Analysis and picks for the Breeders’ Cup Mile at Churchill Downs on November 3rd 2018:

Number 1, ONE MASTER is coming to us from Europe where she made the rounds of top turf countries with good success. She won two straight Graded stakes over there on the slightly shorter distance of 7 furlongs. She won her last race against boys so there is little doubt that she has enough class for today. Unfortunately, she tends to come from far behind and might not have the easiest of trips today as there is not a lot of speed to set her up.

Number 2 NEXT SHARES won his last two races, including a Grade 1 last out, and has generally been doing pretty well at this distance. The fact that he works for a hot trainer is certainly a plus sign that he is ready for a performance. NEXT SHARES will have to stay pretty close to the leaders to have a shot and unfortunately this is not really his style and he falls back pretty hard. Being on an inside post position will also mean being boxed in and the traffic trouble and classy opposition means that his chances are not great for the win.

Number 3, HAPPILY has yet to win a race in 2018 after a great 2-years-old season in Europe. She managed to place a few times In Grade 1 races but her only try this year against the boys was pretty bad. HAPPILY has good tactical speed and a good post position to capitalize on it but the class factor is too big to bet on her.

Number 4, POLYDREAM has been scratched

Number 5 OSCAR PERFORMANCE was never really challenged in his last race and went wire to wire in a pretty good time but slow fractions. Earlier in the year, he was stalking the pace and won handily at a lower class, showing his versatility. Of course he also has never lost at this distance… OSCAR PERFORMANCE has been a bit inconsistent but if he is at his best, he is a big threat today.

Number 6, ALMANAAR works for one of the most successful trainers of the season but he needs to rebound seriously from his poor performance last out to have a shot. The workouts are a bit better leading to this one so there is some encouraging signs but ALMANAAR was stopped for a year and a half before this summer so maybe her physical ailments are back to haunt her. There is too much uncertainty to bet on ALMANAAR I think.

Number 7, EXPERT EYE travels from Europe where he has tried his hand at the open races and did not do well at the top level or mile distance. It looks like endurance might be a factor and youth might be too. The first time Lasix can make a difference but I think that there are better betting choices than EXPERT EYE.

Number 8, I CAN FLY was just beaten by a neck in a top Grade 1 race in the UK and will work on relatively short rest, which she is used to. She tends to come from far behind which should make winning today difficult but a place at interesting odds is in the realms of possibilities.

Number 9, HUNT has been scratched

Number 10, CATAPULT comes up in class after a bit of a break following straight wins at the Del Mar festival. He has some great workouts leading to this race so it looks like he is ready to go again. CATAPULT will need to not fall too far behind to have a good shot and there is the class factor but maybe he is ready to take a step up. The odds will not be very interesting though.

Number 11, LIGHTNING SPEAR has been on the Grade 1 circuit in Europe and done pretty well. He will try the American Turf for the first time and his trainer is relatively inexperienced on this continent but has struck gold 67% of the times he brought a horse in these conditions. LIGHTNING SPEAR gets the fast surface that he likes today so he has a decent shot and the odds warrant to include him the exotic bets at least.

Number 12, ANALYZE IT has a tendency to let the win go in the stretch and that’s a sign of him being outmatched, class-wise. He works for the hottest trainer of the season but he would need to progress to have a shot and the repeated disappointment turn me off ANALYZE IT at these odds.

Number 13, GUSTAV KLIMT has not won in 8 races and has never managed to win at the Mile, seemingly being more of a sprinter. Going for him is his tactical sped but starting from gate 13 will only force him out on the turns and that does not help with the distance…

Number 14, MUSTASHRY has been doing well at the lower level of class in the UK but tries the Grade 1, and the USA, for the first time. He has good tactical speed which will come in handy and the distance or being parked outside should not be much of a problem. MUSTASHRY needs to step up in class but today is not a bad day to try for a score and the odds are interesting.

Number 15, DIVISIDERO has failed every time he tried this distance and has been mostly winning at a lower class level but he does have a win last year at the Grade 1 level. He has only one win since and recent efforts have not been great. It does not look like DIVISIDERO has a prime chance today.

Number 16, CLEMMIE has not won in 2018 despite facing girls every time. Facing boys for the first time today means an even harder race which will not help with her chances… She is more of a sprinter to boot so the far post position can only hurt her.

If OSCAR PERFORMANCE is indeed at his best, he has a prime chance and a good post position for his tactical speed.

At longer odds, we could see some Europeans make a splash. LIGHTNING SPEED should go out at long odds but his trainer has done well in this situation before and he was racing well on the more difficult European circuit.

MUSTASHRY is in about the same situation and his success in Europe could translate in success on the easier turf circuit of the USA. He has good tactical speed so can be placed well come the stretch.

I CAN FLY was barely beaten in her last try but she has beaten boys before so she could round up the exotic bets.