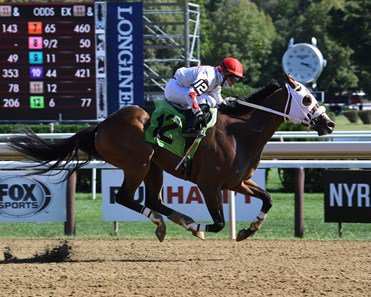 The Cigar Mile card at Aqueduct looked good on paper. Finishing with 4 stakes races was sure to peak horseplayers interest…then Friday happened.

Heading into Friday’s racing at Aqueduct there was a carryover of just over $84,000. A carryover is a result of no winners cashing on the previous race day. Following a consolation payout to the players with the most number of correct horses, the remaining funds are rolled into the pool for the next racing day.

Carryovers are often triggers for players to get involved in sequences as they effective lower takeout. A pick 6 is no easy feat to hit. The $1 minimum in New York forces players to be more selective in their opinions or risk a ticket that could send them to the poorhouse.

The field was pretty strung out early and pretty much everyone was able to find their trip heading into the first turn. The race progressed with unusual pace and as the horses turned into the stretch, the field was tightly packed and chasing #1 A Ring Thing at 8-1.

#4 Evidence Based checked hard in the stretch and #3 had to come from last and switch from the rail to about the 7 path effectively eliminating them from contention. The #10 ducked inside of the leader while the #11 tried the outside, bumping out #12 Sweet Mission (21-1).

It appeared as though it would be a formful start to the pick 6 with either the #10 or #11 getting the job done. However, in the end it was the #12 under Jose Ortiz that would outkick in the stretch. There was a brief objection from the #11, but it was overruled and the pick 6 was off to a crazy start with a 21-1 shot.

21-1 was hard to come up with, but it was not impossible to have particularly if you had a strong opinions in future races. That was a lot harder to say after race #6.

Glitter Up went off at 16-1 and was impressive leading the field from the start. The horse was not unreasonable in this spot and probably landed on a number of pick 6 tickets. However, in the final jumps of the race the 2 tired and it was Lost My Sock at 51-1 that got the nose on the wire first.

Immediately the alarm bells were already going off that another carryover was well within the realm of possibility.

Race 7- Nail in the Coffin

Race 7 from Aqueduct sealed it. Saratoga Pal left the gate at 19-1. This made him the longest shot on the board. In the stretch the field tightened looking like almost anyone had a chance. The hopeless one at the back of the pack was Saratoga Pal.

As the wire drew near the front runners were noticeably fatigued and from off the screen #4 Saratoga Pal found incredible stride. When the result went official, the prognosticating began. What would the day 3 carryover be.

3 Races after the string of ridiculous upsets, the speculation was confirmed. There would be yet another carryover in the pick 6. Instead of the $84,000 that carried over into the Friday Card, Saturday’s Cigar Mile card will see a carryover of over $700,000. This almost ensures that the pool for Saturday’s pick 6 will be well over $1,000,000 with over $700,000 of dead money already in the pool.

#2 FENWICK (5-2) should be competitive today based on the horse's advantages in speed & form. #7 LONG TERM (2-1) is worth a look here given edges in connections & power rating. #1 SCRIPT (9-2) merits consideration in this spot given edges in stamina & pace numbers. #8 UNION LIGHTS (12-1) could get a perfect pace scenario today.

#3 ROBYN AND ELI (2-1) looks tough here and has the best speed figures in the group. #2 I'LL GO ALL IN (8-1) is in with a great chance based on experience and breeding. #14 WICKED LADY (9-5) could get a perfect pace setup today. #9 VALENTIA ISLAND (8-1) is an interesting outsider worthy of consideration underneath.

#8 ARTEMUS CITYLIMITS (3-1) is worth a look here given edges in class & power rating. #12 WUDDA U THINK NOW (9-5) is another player based on speed & form. #5 SCUTTLEBUZZ (4-1) is proven as a good bet to at least hit the board under today's distance and surface conditions. #1 GUILDSMAN (6-1) looks like the next logical contender.

#6 SUPREME AURA (6-1) looks tough to beat here given the edge in a number of key categories including top connections & class. #1 RUNNINGFORHOME (7-2) is a major player based on speed figures. #2 DIRECT ORDER (5-1) has the top in the money record at the distance. #3 LEGIT (8-1) merits consideration in this spot given edges in stamina & class.

Aqueduct Race 5- Start of the Pick 6

#5 HARD PLACE (7-2) looks to have to have kept the best company in the previous starts. #2 ETHERIC (10-1) is worth a look here given edges in form & power rating. #3 MARKETSEGMENTATION (5-1) has to be respected based on the connections. #6 ROSEBUG (3-1) should be competitive today based on the horse's advantages in speed & race flow.

#6 URBAN FOREST (5-2) looks like a solid favorite based on speed and form ratings. #9 KING OF HOLLYWOOD (12-1) would be a steal at the price given the recent company. #5 CARPE'S DREAM (4-1) is worth a look here given edges in record at the distance & pace numbers. #2 FIERY HEART (3-1) has to be respected based on the connections.

#2 LADY ROCKET (8-5) rates out as the top speed & power horse among several other categories. #1 MISS MARISSA (4-1) is in with a great chance based on the horse's advantages in record at the distance & pace numbers. #7 SHARP STARR (7-2) merits consideration in this spot given edges in stamina & form. #3 BELLA VITA (5-1) is proven as a good bet to at least hit the board under today's distance and surface conditions.

#2 WHO HOO THATS ME (6-1) merits consideration in this spot given edges in speed & form. #1 MO DONEGAL (8-5) has the strongest overall power rating and should have plenty left in the tank late. #3 JUDGE DAVIS (5-1) is worth a look here given edges in class & pace numbers. #7 ZANDON (5-2) comes from a great barn and will likely have a hand in the final outcome.

#7 MAGIC CIRCLE (7-2) tops the field in speed figures and comes in amid an upswing in form. #5 NEST (2-1) has the best speed numbers in the group and will definitely be dangerous in this spot. #6 TAP THE FAITH (3-1) is worth a look here with the top power rating in the field. #3 VENTI VALENTINE (5-1) is an outsider but wouldn’t be a total shock.

#3 AMERICANREVOLUTION (5-2) looks really tough in this spot. He’s been in great form and has the best speed figures in the group. #1 FOLLOWING SEA (5-1) should be in the right spot early to give this horse a chance to get the job done. #4 CODE OF HONOR (6-1) may look to get a perfect pace setup here and could be the most talented overall runner in this field. He is the only grade 1 winner in the field. #5 INDEPENDENCE HALL (7-2) will likely have the stamina to outlast these in the final jumps of the race.

For more analysis and data to help you take down the pick 6 carryover, check out the free handicapping products available on Betting News.

The 2022 Formula 1 season is only six races deep, but the race for this season’s championship alerady appears to be down to just two drivers. Last season, Red Bull driver Max Verstappen claimed his first Formula 1 World Drivers’ Championship in highly controversial circumstances, with Lewis Hamilton denied what would have been a record-breaking END_OF_DOCUMENT_TOKEN_TO_BE_REPLACED