Analysis and picks for the Cigar Mile at Aqueduct Racetrack today 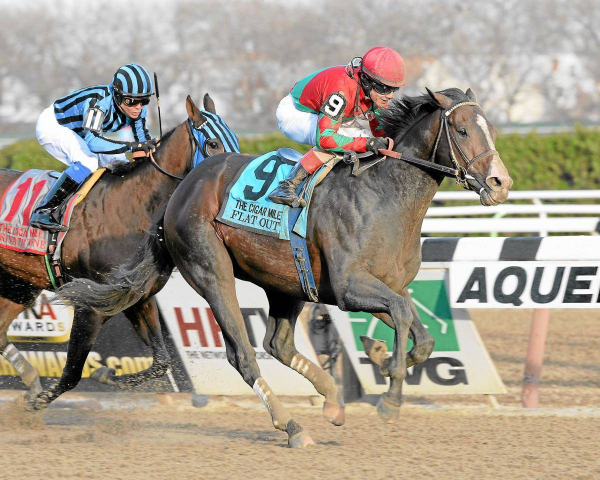 A nice day is supposed to turn rainy in New York but it should not prevent us from enjoying some of the best stakes races organized at Aqueduct.

On the program today, we have the Cigar Mile Handicap as the main event and four other stakes races, including the Ramsen Stakes Grade 2.

Aqueduct is a stereotypical American racetrack in that the track bias favours horses that are on the lead or near the lead and this year that bias is particularly strong. Being on the outside is generally better but the 1 mile and 1/8 races start very close to the turn so in this case the inside post position is better, granted the horse can navigate to the outside afterwards…

The existence of this strong track bias at Aqueduct makes it a bit easier to handicap he races but it can also create some surprises.

Here are the picks for the main races at Aqueduct for today, December 1st

This route race for juvenile female horses is pretty evenly matched in terms of class. Moreover, these being young horses, it is not certain which of them will show enough early speed to grab the advantage. On paper there is not a lot of early speed, so I think that the favorite, ENLIVEN, will not get a great setup to win and I will be betting against her.

More interesting odds-wise is the number 5, JENNIFER’S DREAM. Her trainer is also having a great week and she also has shown good speed in her first two starts. In terms of speed, those were pretty disappointing though but maybe the hard trips can explain that. JENNIFER’S DREAM will be placed outside here and that will help her chances so if she can ride that track bias all the way, she could surprise at long odds.

Another route race for the girls but this time for more mature horses. There is more early speed in this one but again I don’t think that it should be enough to setup the race for the favorites, who starts on the rail to hurt her chances even more. The favorite MARLETY’S FREEDOM comes down in class for this one but stretches the distance for the first time. On the basis of speed figures, she can destroy them, but I will be betting for an upset here, and will try to use the Aqueduct track bias for my advantage.

Number 7, COME DANCING, was beat soundly in her first graded stakes attempt but she did show some good early speed and previous races have also seen her go for the lead in quick fractions and her ability in that regard. She is starting from the outside of the track, so I think that COME DANCING could take them all the way at interesting odds.

If she is caught, the favorite is of course a strong candidate but so is number 5, YOUR LOVE. She should be able to stay closer to the lead than the favorite and be in a prime position to strike if COME DANCING falters.

This is the same scenario as race 4 but this time for the young male horses. This time, we have little early speed and the favorite is well placed, with the pace advantage. Number 6 MAXIMUM MISCHIEF has gone all the way in his first two starts and won decisively with great speed figures. Based on the workouts, he is ready to go again and looks hard to beat.

There is a dark horse who could spoil is party though, number 7 TAX. He won his last race in the claiming maiden category which is about the worst you can do but he was indeed claimed there and now works for an in-form trainer. He worked out superbly since and is getting Lasix for the first time, so we could see a transformed horse here… He needs to step up massively to win though and probably will just be a torn in the favorite’s side.

If that’s a big enough thorn, it could open the door by number 5 NETWORK EFFFECT or, at longer odds, number 3 BOURBON WAR. The Favorite is as strong as can be here though.

The main event for the racing day at Aqueduct is the Cigar Mile, a mile of course for 3 years old and up.

The favorite has been the talk of the town all year but has failed to deliver every time, so I expect MENDELSSOHN to once again disappoint his many backers. He will contribute to a hot pace however and I don’t think that one of the other morning line odds favorites can sustain it. PATTERNRECOGNITION will be well placed on the outside but I believe the pace will be too much for him and he will falter.

That should open the door for a come from behind horse to overtake them both in the stretch. Number 5 COPPER TOWN is a prime candidate. He got back into the groove with a sprint win last month (after a long layoff) and works for a star trainer who known what he is doing…

Number 3 PAT ON THE BACK will go out at long odds but should be racing close to the leaders and has enough late speed to claim a spot on the podium.

To complete the podium, and betting on a complete collapse of the leaders, we can add number 2 SUNNY RIDGE. Another horse with strong late speed and valid credentials in stakes race.

Tonight’s NBA betting schedule is lacking in overly compelling matchups, but tonight’s action will also be taking place with a few notable names missing. Booker, Morant, and Lillard Sidelined Tonight and Beyond Booker Out Versus Pistons Due to Hamstring Injury The Phoenix Suns lost Devin Booker (hamstring) on Tuesday against Golden State but closed out END_OF_DOCUMENT_TOKEN_TO_BE_REPLACED