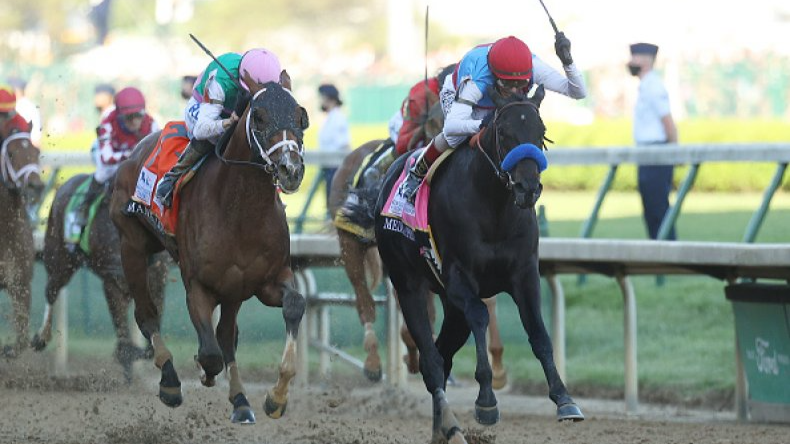 History Repeats Itself at the Kentucky Derby

Last year Bob Baffert had Nadal and Charlatan as his top horses. Both came off the Derby Trail and the “other” “other” Baffert Authentic won the run for the roses. This year was deja vu. With Life is Good off the trail due to injury and Concert Tour opting out of the Kentucky Derby, He was left with another third-string runner.

Problem? Not for Baffert. Medina Spirit went off in the Derby at 12-1. He took the field gate to wire under the same jockey that rode Authentic last year.

One of the reasons John Velazquez was able to get Medina Spirit to the lead and set the pace was that the horses to his outside, encountered traffic just steps out of the gate. Highly Motivated and Essential Quality were able to fight through it and find stalking positions. Rock Your World, who was largely considered part of the pace scenario was shut off. He never showed much of anything throughout the race.

Into the first turn, Medina Spirit sat comfortably with little pressure. This allowed Velazquez to settle him and conserve energy. With the rest, Medina Spirit had just enough horse to fend off 3 late-charging rivals including Mandaloun, Hot Rod Charlie, and race favorite Essential Quality.

The final margin of victory was 1/2 length, the closest since 2005. With the victory Bob Baffert holds the outright record for Kentucky Derby wins with 7. John Velazquez joins an elite club of jockeys who have won the Kentucky Derby and the Oaks in the same year.

Behind Medina Spirit, it was the other Brad Cox runner, Mandaloun, that filled out the exacta. Finishing third was Hot Rod Charlie and in fourth was race favorite Essential Quality.

The 4th place finish means that world powerhouse ownership group Godolphin Stables remains without a Kentucky Derby. It is a goal they have been chasing for a number of years.

Steve Asmussen has extended his dubious record of most runners without a win. His horses Midnight Bourbon and Super Stock did not factor in the race bringing his streak to 23.

The board was fairly wide open as the fillies entered the gate for the 2021 Kentucky Oaks. Malathaat for Shadwell Stables was the slight favorite at 5-2, but was one of 6 horses under 10-1 at post.

As the gates opened the Pletcher trainee encountered immediate trouble getting squeezed by Will’s Secret on the outside and Coach on the inside. At the first call the regally-bred filly found herself sitting three-wide just off the flank of Travel Column and Moraz.

The order of the horses remained largely unchanged as they ran up the backstretch. Entering the far turn Malathaat started to range up as well-backed Travel Column started to hit a wall.

When the horses entered the stretch there was a momentary tight bunching of contenders. However, within a few strides, two undefeated equine athletes separated themselves setting up a duel of champions to the wire.

Malathaat with Hall-of-Fame jockey John Velazquez took the lead by a head. Search Results, with Irad Ortiz adorned in the famous Klaravich Stables silks, fought back on. The two bobbed back and forth, contacting one another several times in the lane. In the end, Malathaat maintained her undefeated record winning by an official margin of a neck.

Following the wire, the jockeys celebrated the thrilling stretch run by exchanging high fives and pats on the back while their horses galloped out. Their excitement was matched by any horse racing fan who got to watch the contest equal to the moment.

Maxfield sat several lengths off of a moderate pace throughout much of the Grade 2 Alysheba. When the horses turned into the stretch he wheeled wide and devoured the pace-setters near the center of the track.

The Grade 2 Edgewood saw a disappointing return to the races for Brad Cox’s talented filly Aunt Pearl. After jumping to the lead early, she stopped as eventual winner Gift List (GB) and 3 other challengers stormed past.

Shedaresthedevil had everything her own way in the Grade 1 La Troienne. That’s not to say it was easy as Envoutante made a late flourish to test her grit in the stretch. In the end, the 2020 Kentucky Oaks winner was equal to the challenge.

Jose Ortiz came rolling late down the middle of the track to get Obligatory across the wire first in the Grade 2 Eight Belles for Bill Mott. Obligatory left the gates at 16-1.

Fast Boat swung out wide in the lane and closed with a great late kick to win the Grade 2 Twin Spires Turf over favored frontrunner Fiya.

Blowout(GB) continued Chad Brown’s turf dominance jumping out to a massive lead before holding off the calvary in the stretch in the Grade 2 Churchill Distaff Turf.

Bob Baffert superstar Gamine slipped out of the gate in the grade 2 Derby City Distaff. Going down to a nose she gathered herself and rushed to the lead. Late in the stretch, she had to fend off challengers from her inside and outside but was able to pull away in the end.

One of the most impressive performances on the weekend was run by Jackie’s Warrior who started the year on the Derby trail. The horse set blistering fractions and held off the competition to return to the winner’s circle in the Grade 2 Pat Day Mile.

The Grade 2 American Turf saw Bob Baffert get another stakes win with Du Jour on the turf. Flavien Prat masterfully rode the horse up the hedge to get into position. In the lane, he shifted outside of the pacesetter for the final stretch run.

The Grade 2 Churchill Downs Stakes saw a thrilling finish in which 5 horses were with 1 length of the winner. In the end, hard-knocking Flagstaff earned the victory over Lexitonian and fan-favorite Whitmore.

As the anticipation for the Derby reached a crescendo, so too did the action. After a number of incredibly tight races throughout the two days of racing, the Old Forester Turf Classic was too close to call. Favorite Colonel Liam got to the front in the late stages of the stretch. Domestic Spending had to push his way through traffic but was able to range up on the outside of the favorite.

The two hit the line in perfect harmony causing the stewards to light the photo finish sign. After thorough review, it was determined that the horses could not be separated even via a still photograph taken at the exact moment they passed the wire. The race was a dead heat with both Colonel Liam and Domestic Spending being declared co-winners. 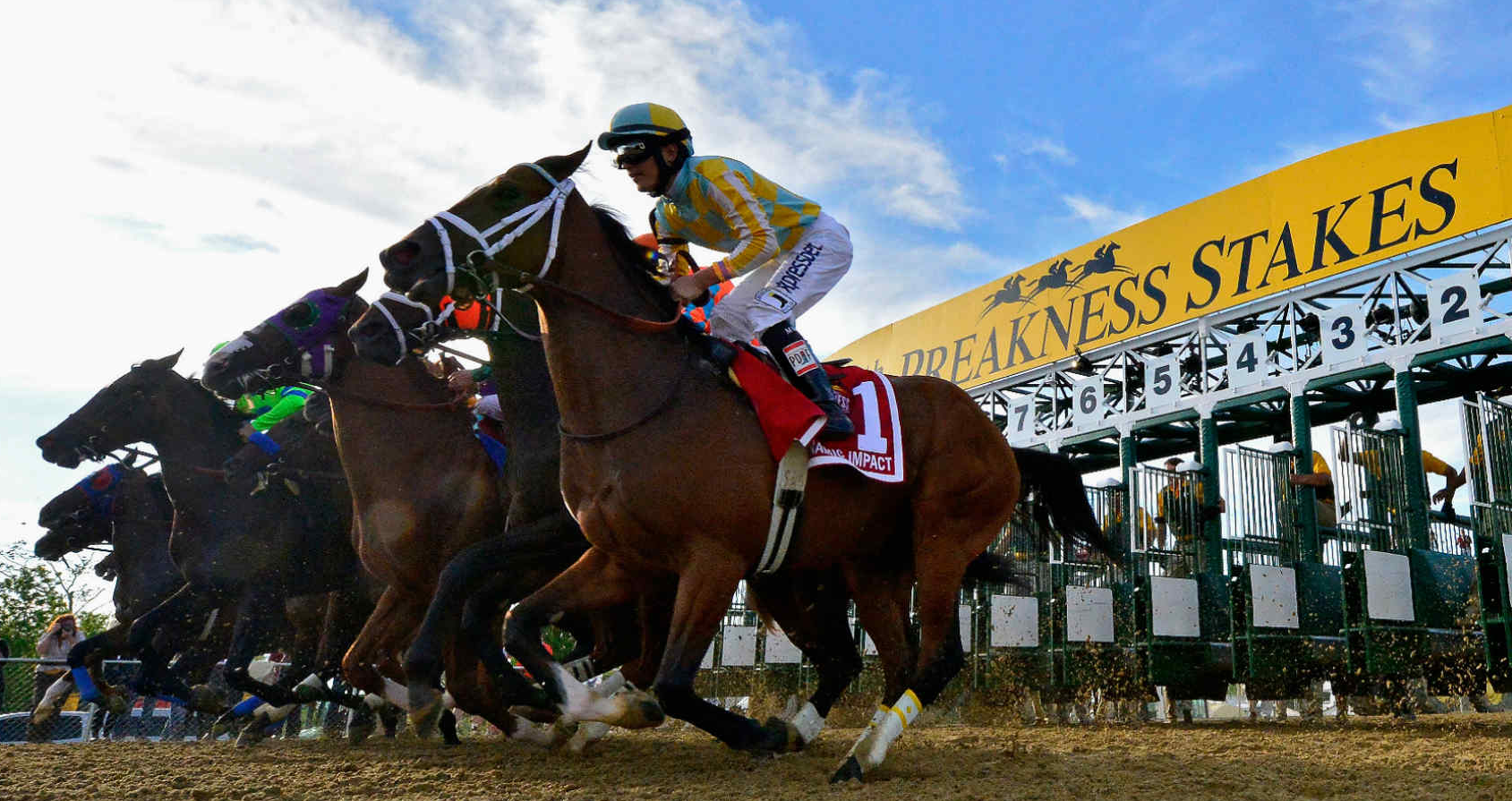