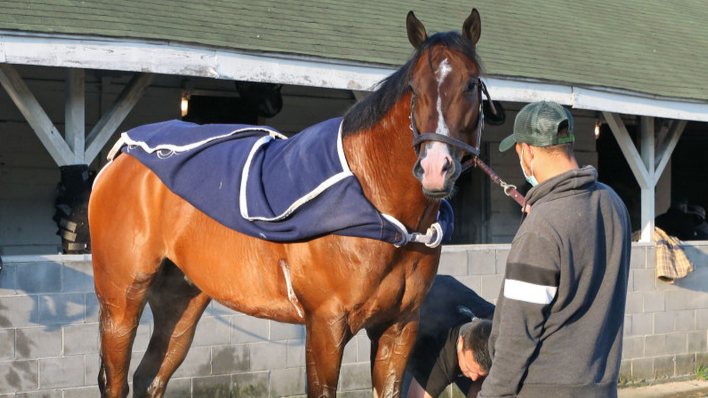 Saturday’s Kentucky Derby at Churchill Downs brings the ultimate value challenge and, while Essential Quality is likely to leave the gates as the favorite, a case can be made for almost all of these 3-year-olds.

But we narrowed this breakdown to three horses to target for varying levels of risk and reward as the Derby horses are scheduled to break from the gate at 6:57 p.m. ET.

Highly Motivated ran Essential Quality to within a neck in the Blue Grass Stakes. He still has not won this year, but he has the speed to stay out of trouble. A Washington Post story underscored his 102 Brisnet speed figure in each of his past three races.

So who’s faster than that? In the 2021 Run for the Roses field, only morning-line favorite Essential Quality has more than two triple-digit speed figures among the others.

Highly Motivated also satisfies both benchmarks of Jennie Rees’s final fraction theory, which found that how fast a horse finishes in its final prep is crucial to its Kentucky Derby prospects, especially its speed over the last three-eighths of a mile. About three-quarters (23 of 31) of Kentucky Derby winners since 1990 have run the last three-eighths of a mile of their final Derby prep race in 38 seconds or less and also covered the final eighth of a mile in 13 seconds or less.

Nearly 87 percent of those Derby winners (27 of 31) met at least one of those criteria. Highly Motivated ran the last three-eighths of the Blue Grass in 36.5 seconds and the last eighth of a mile in 12.2 seconds.

The drawbacks? The No. 17 post is no picnic – it has produced exactly ZERO winners in the history of this race — but Brown seems ready to accept the challenge.

“It’s a little farther outside than we would have liked, but there’s a long run into the turn and this horse clearly has a lot of natural speed,” Brown told the Louisville Courier-Journal. “Hopefully we’ll be forward enough to come over and get some position into the first turn.”

The Prime Value in Saturday’s Kentucky Derby: Rock Your World

Rock Your World is not sneaking up on anyone this time, but if the number stays at 5-1 or better, this is great value for a big, strong, learning, growing, talented colt who looked like a champion in the Santa Anita Derby.

“We have been laying in the weeds,” Sadler said. “I thought it would be good to start this horse off on the turf, much like Omaha Beach, and develop.”

Rock Your World did not race until 2021 and even then, ran twice on turf before Sadler unveiled his beast in the Santa Anita Derby.

And his perfect, three-for-three season is enough to make Rock Your World the prime value play.

Ed McNamara, a horse racing writer who has written books and handicapped for ESPN and Newsday, likes the value. He wrote glowingly at U.S. Racing about Rock Your World.

I’m putting Rock Your World on top because he’s done nothing wrong, and I think he still has room to improve. He reminds me of 2008 Derby-Preakness champion Big Brown, who like Rock Your World began his career on turf. I’d love to get 5-1 on him, but I think he’ll be more like 7-2.

And Sadler has this process figured out.

“I learned a lot from my Derby trips,” Sadler said a week ago. “I learned you can’t force it. If it happens, it happens. You can waste a ton of energy going crazy over what post you draw. I’m not going get involved in any of that. And I’m in no rush to get to Louisville. I’ll train here. It doesn’t rain in California in April, so I’ll wait until Derby Week.

“I’m doing it just the way I want to this time.”

NBC Sports’ Randy Moss said during Friday’s Kentucky Oaks broadcast that he appreciates the talent shown by Rock Your World.

“He was awesome in that race,” Moss said. “I thought, for my money, he was the most impressive of any of the final preps for the Kentucky Derby.”

The big dark-horse bet for Saturday’s Kentucky Derby: Dynamic One

Dynamic One is blessed with plenty of speed for Ortiz to position himself comfortably when the field settles into the first turn. He’s another colt who’s improving and has a trainer who really knows what he’s doing.

His breeding suggests he’ll take to the longer distance on Saturday; his sire is 2012 Belmont Stakes winner Union Rags.

Dymamic One has not had the best luck with outside-post draws and a ton of traffic that compromised his preferred path. In the Wood Memorial, he showed continued improvement and had the lead late in the race before finishing second.

He’s enjoyed his time leading up to the race, having worked as well as, or better than, his Derby opponents recently.

He ran a scintillating four furlongs at Churchill Downs last Friday, and veteran turf writer Steve Haskin is a believer.

Haskin cited Dynamic One’s strong run despite a wide trip in the Wood Memorial that, he said, included the colt running 43 feet farther than the winner.

From Haskin’s Derby handicapping at Secretariat.com comes this analysis for Dynamic One:

With his rate of improvement, his maturing mentally, and turning in one of the strongest works we saw all week, I am projecting that he has another significant move forward in him that will put him in a position to either win at a big price or finish in the money.

If bettors have a little extra disposable cash handy, that kind of endorsement may be worth a closer look.