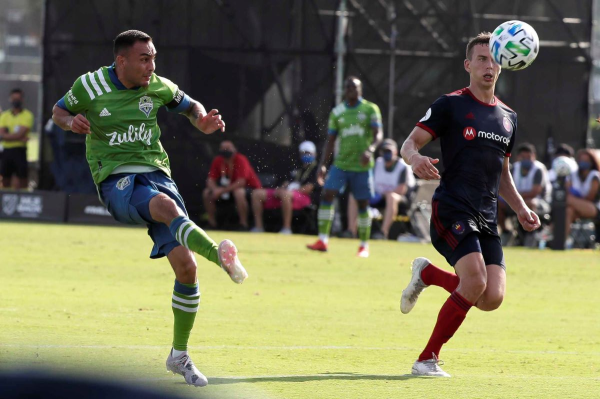 The Seattle Sounders began the MLS is Back Tournament as the second-biggest favorite to win the title at +750, but they are scrambling to just advance from Group B with one game left against Vancouver Whitecaps FC on Sunday night. Seattle was -120 to win the group, and they will need a miracle to make that outcome happen. Vancouver, meanwhile, was a longshot to advance from the group at +750, but a result against Sounders make that a possibility.

Seattle and Vancouver faced each other twice in Western Conference play last season with a 0-0 draw in Vancouver in March and a 1-0 Seattle home win in June. Seattle swept the series in 2018 and eliminated the Whitecaps from the 2017 MLS Cup playoffs. It has been nine games since Vancouver beat Seattle 22-1 on April 14, 2017.

The first 70 minutes of Wednesday’s game against San Jose was a dream for Vancouver as they led 3-1 with a San Jose own goal coming between strikes from Ali Adnan Kadhim and Cristian Dajome. But the final 20 minutes were a nightmare as the Whitecaps conceded three times and left without a point in a 4-3 setback.

Before the COVID break, Vancouver lost at home to Sporting KC 3-1 in the season opener. A week later, Tosaint Ricketts scored the only goal of the game for a 1-0 home win over LA Galaxy. Manuel Milinkovic has two assists on the season, while Vancouver has four different goal scorers, and Crepeau has made eight saves.

After the game against Seattle, Vancouver will face Chicago Fire in the group’s final match. Heading into this weekend’s games, San Jose leads the group with four points while Chicago has three, Seattle has one, and Vancouver heads into its second game without any points.

This tournament has not gone according to plan for the defending MLS Cup Champions as they lost 2-1 to Chicago Fire after a 0-0 draw against San Jose. Substitute Handwalla Bwana tied the game against Chicago with a goal in the 77th minute, but the Fire got the game-winner seven minutes later.

Goalie Stefan Frei has 11 saves in the two games, but Seattle has put just seven shots on goal.

Jordan Morris leads the team with two goals on the season, but he has now gone three straight games without a goal. Raul Ruidiaz scored from the spot to equalize against Columbus on March 7. Cristian Roldan has two assists on the season, while Frei has 15 saves and four goals allowed in four starts in 2020.

Newcomer Joao Paulo, a Brazilian designated player signee this offseason, has missed both games in the tournament with a quad injury. Fellow midfielder Nicolas Lodeirohas returned to action after missing the early season games, and the Uruguayan has played 90 minutes in both tournament games.

Seattle has dominated this series in the last three seasons, and they need a win to have any chance to make the knockout round. The Sounders championship pedigree will be tested by a Vancouver team who found their attack in the first half Wednesday night.

It will be interesting to see how the Whitecaps bounce back after a heartbreaking setback as they look to pull off an upset to stay alive in group play.