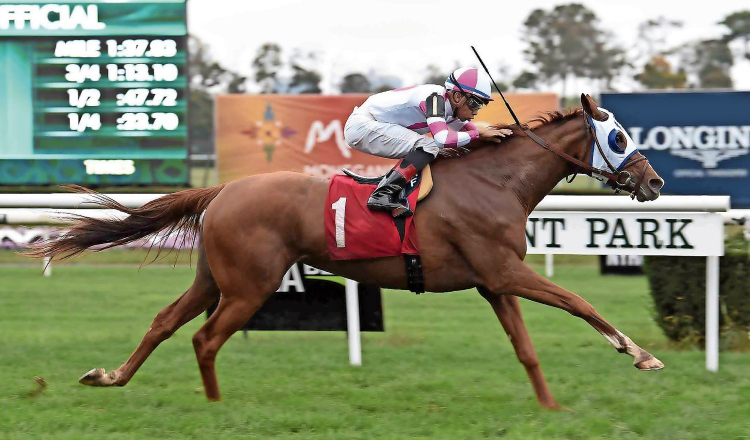 The second race of July 12 at Belmont Park is run on the main turf track and a good group of claiming horses are going to compete.

It is an interesting race because multiple elements are at play: most horses are switching class levels and multiple horses have clear racing styles which should give an advantage to pace handicappers.

With the odds expected to be relatively even between multiple contenders, there is good value for bettors who can identify the horse or horses with a good chance.

The favorite can be beat in my opinion and two horses going out at interesting horses can benefit.

Number 1, BLISSFUL BREEZE drops a couple of class levels after a disappointing run at the price tag of $50 000. She was parked outside 3-wide for the whole race in that one which is a poor position to be in at the Belmont Park Inner Turf track. BLISSFUL BREEZE is drawing the rail this time, so she will have a ground saving trip and that should help her chances today. She switches to a hot jockey who has been trusted for winning efforts by her trainer so that’s another positive sign. BLISSFUL BREEZE has won on this course before and has run longer too so distance should not be an issue. She is probably up for a much-improved performance at the lower class level and the morning line odds of 9-2 are certainly interesting considering that she can come from behind and there should be ample speed to set a hot pace in front of her.

Number 2 VIP NATION closed pretty well the last time and if she can run the same way today, she should have a good race as the pace is likely going to be hotter. She also switches to a better jockey so that can help too. It is her second start at this class level and only fourth start on the turf which has been much better to her than dirt. VIP NATION is one of horses who should make ground in the stretch, so I like her chances to at least place and the odds should be interesting enough to bet on it.

Number 3, REGAL DAME will be one of the favorites come post time on account of her good speed figures (for that field). I don’t really like her chances though. She failed last out two class level higher, but I don’t think it was a very good loss as she grabbed the lead starting from the rail on the inner turf course. This should have allowed her to hang on for better result. Today she will face early pace pressure, so I think there is a good chance she folds in the stretch again. REGAL DAME did not demerit at a higher class level but based on pace handicapping I think that she is a favorite to beat today.

Number 4, TIZ PRICELESS is another speed horse which should go into an early pace war with multiple horses. She drops class levels, so she is a threat and the bullet workout is an encouraging sign of fitness. Her trainer is not known to place his horses for the right price tag on the first try however. TIZ PRICELESS has faded every time in the stretch outside of her maiden win so, in this likely hot pace, it seems to me like it will be a difficult race to win for her.

Number 5 PROPORTIONALITY is entered for the Main dirt track only and with no rain on the horizon in New York, I expect the race to run on the Turf as planned. There is no point in handicapping her if she is going to be scratched and if she is not, I am not sure she has much of a chance going up in class anyway.

Number 6, GIA MICHAEL comes up in class and works for a trainer who is winless this season and an out-of-form jockey. Her best results have been on the turf so far in this career, but she has not won on the surface nor on the distance. GIA MICHAEL could come from behind for a place but even that is unlikely in my opinion. Pass.

Number 7, MISS JEN broker her maiden in class on the first try last year but since then she has not come close to the winner’s circle. She has some early speed and I think (and hope) that she will be in the mix in the early going, but I see no sign that she can best this group. The loss last month was not very good, and her recent workout is not so great looking either. It looks difficult for MISS JEN today and maybe she should drop another couple of class levels.

Number 8, CAUSE ME GRIEF is likely going to go out as the favorite and is another speed horse who should go into a hot pace early. She will be on the outside, making her race even more difficult. A couple of her last race opponents went on to win but not at spectacular class, so it is not really a plus sign. CAUSE ME GRIEF is lightly raced so maybe she has progressed but with the pace scenario she is going to face, I think that she is a favorite who can be beat.

The favourite is weak and facing a hard pace and post position situation so there is value in betting against her.

I expect the speed horses to tire in the stretch which will open the door for well placed, come from behind, horses.

BLISSFUL BREEZE should be in the right spot to strike in the closing stages, granted she has the racing room. But with a good jockey like hers, I am sure she can find it.

VIP NATION is another horse likely to save ground and be able to close hard. I think that BLISSFUL BREEZE has a better shot here, but I like VIP NATION in the exacta bet at least