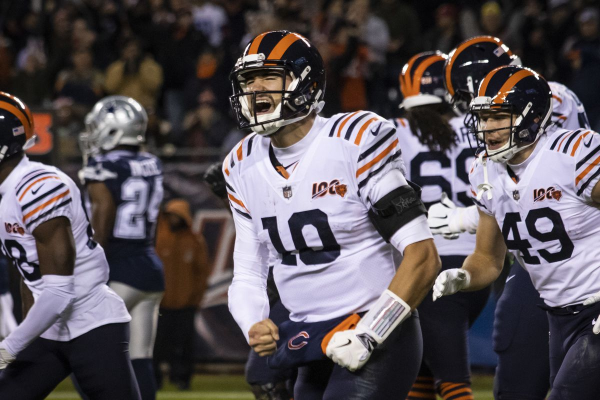 When two teams meet in Week 14 of the NFL season with just six wins each, it’s normally the case that neither still has a legitimate shot at playoff football. Yet with Chicago’s 31-24 win over Dallas on Thursday Night Football, both teams have a path to the postseason.

The Bears entered this contest with a pair of wins over the Giants and Lions, and the confidence gained by quarterback Mitchell Trubisky in that short stretch was evident Thursday night. While Trubisky has struggled for large stretches of the season, he looked like the best version of himself against a vulnerable Dallas defense.

With only one bad mistake all evening, Trubisky completed 23 of his 31 passes for 244 yards, three touchdowns, and one interception. He was also a major part of the rushing game, as he picked up multiple first downs and a dagger of a touchdown while running for 63 total yards.

On the flip side, the Cowboys continue to feel like a talented roster that keeps underperforming. After a masterful opening drive that ended in an Ezekiel Elliott touchdown – one of his two TDs on the night – Dallas went the better part of three quarters without finding the end zone again.

Elliott was effective on the ground, but a poor Cowboys defensive performance forced the offense into a pass-heavy attack that failed to consistently pick up first downs.

However, Thursday’s result keeps both the Bears and Cowboys alive in their respective playoff hunts.

Chicago’s Path to the Postseason

The ironic thing about Thursday’s result is that, despite earning the win and improving to 7-6, the Bears still face a tougher road to the playoffs than the 6-7 Cowboys.

Yet Chicago still has a legitimate chance, and now, coach Matt Nagy has this team on another roll.

When it comes to the NFC North, the Bears have a very slim chance of earning the division title. At 7-6, Chicago remains behind 8-4 Minnesota and 9-3 Green Bay.

On the bright side, the Bears own a division record of 3-1 and still play both teams ahead of them. On the negative side, Chicago has already fallen to Green Bay once, and they’d need the Packers to slip up down the stretch.

The more likely path to the postseason for this Bears squad is via a Wild Card berth. In that race, one spot looks destined for one of the two NFC West teams sitting at 10-2 (San Francisco and Seattle). The second spot, however, is still up for grabs.

That race for the final playoff position appears to be a three-team race between the 8-4 Vikings, 7-5 Rams, and 7-6 Bears. Once again, there’s good news, as Chicago gets to take on Minnesota in the last game of the season with the potential for a two-game swing.

However, there’s more bad news. With just three games remaining, the Bears will have to go into Green Bay, then host the Chiefs and go into Minnesota to close out the regular season.

Coming into this Thursday Night Football matchup, the Bears were sitting on odds of +1200 to make the playoffs. While those odds will improve after the victory, Chicago still faces an uphill battle with a relatively weak record and a tough schedule.

Dallas’ Path to the Postseason

Despite the loss to Chicago, the Cowboys’ playoff hopes are still very much alive. But unlike Chicago, who’s only shot is by claiming a Wild Card berth, Dallas’ only real shot is to win the NFC East.

Believe it or not, the Cowboys are still in the lead of the division despite losing to the Bears and falling to 6-7. Right now, they continue to stay ahead of the 5-7 Eagles and will remain in the lead even if Philly wins this week based on both division record and the head-to-head tiebreaker.

Whereas Chicago needs plenty of help in its pursuit of the playoffs, Dallas’ path is a straightforward one.

Even with a loss to the Rams next week, wins over the Eagles and Redskins in the final two weeks of the season would earn the Cowboys playoff football.

Coming into the contest against Chicago, the Cowboys held -230 odds of making the playoffs. While a defeat on Thursday Night Football will hurt those odds, Dallas still remains the more likely between the Bears and Cowboys to reach the postseason.