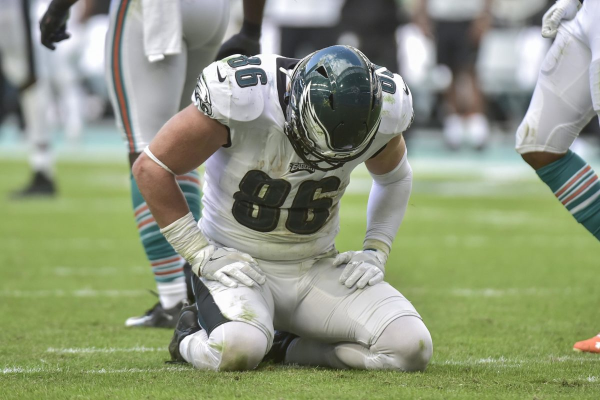 With a chance to bring themselves even with the Dallas Cowboys in the NFC East standings on Sunday afternoon, the Philadelphia Eagles couldn’t have wished for a better opponent than the 2-9 Miami Dolphins. Yet, in what was perhaps the best game of the season for Dallas, Philadelphia fell to 5-7 after being defeated 37-31 by Miami.

Despite their losing record, the Eagles were expected to dominate the Dolphins on Sunday. Entering the game, Philadelphia was a 10-point favorite after the odds were pushed higher from their open of 7.5 points.

Yet the Eagles couldn’t keep hold of their 21-14 halftime lead, and Ryan Fitzpatrick was nearly unstoppable in the final two quarters of play.

After being intercepted on the first play of the game, Fitzpatrick would go on to complete 27 of his 39 passes for 365 yards and three touchdowns. And Fitzpatrick wasn’t the only Dolphin who would end up with a TD pass.

The play that will likely haunt Doug Pederson and his Eagles the most came on a fourth-and-goal play in the second quarter. After lining up five players wide to the left and four players wide to the right, only the center and punter Matt Haack were in the middle of the field.

Haack to the snap and ran to his left. After faking a block, kicker Jason Sanders slipped through the Philadelphia defense and caught a touchdown pass from Haack.

Although the Eagles would regain the lead, the trick play helped the Dolphins earn the victory and wound Philly’s chances of catching the Cowboys.

Entering this week of the NFL season, the Eagles had a straight shot to the postseason via the NFC East title with the weakest remaining schedule of all teams. The Cowboys, on the other hand, would have to face a significantly more difficult schedule.

After Dallas fell to the Bills on Thanksgiving, the road became even clearer for Philadelphia.

Instead, the Eagles lost to the Dolphins and fell to 5-7 on the season. With a big Week 16 matchup with Dallas on the horizon, Philadelphia remains in second place within the NFC East with a division record of 1-1.

The Cowboys are just 6-6 overall but have a grip on the division lead and have the advantage of a 4-0 division record as well as a win over the Eagles earlier in the season.

With all of that being said, the Eagles still have one of the easiest remaining schedules despite their lost opportunity against Miami. Coming up, Philly will face the 2-10 Giants, 3-9 Redskins, 6-6 Cowboys, and the 2-10 Giants again.

So, Philadelphia faces the easier schedule of the two, but it will need some help after letting the game against Miami slip away.

NFC East Up For Grabs

The Eagles have yet to look like a complete football team, and losses against two-win squads this late in the season will do little to improve their confidence. Meanwhile, the Cowboys have been underwhelming with a roster full of talent.

So, who ends up as NFC East champs and books a ticket to the postseason?

While that Week 16 contest between Philly and Dallas will likely go a long way in determining the eventual division winner, we can take a look at who has the better shot at taking the NFC East crown right now.

According to the odds, Dallas remains a slim favorite to win the division at -180. Philadelphia trails closely behind with odds of +125.

At this point, there’s very little room for error for the Eagles, who may very well find themselves out of the playoff race entirely with another loss to inferior competition.