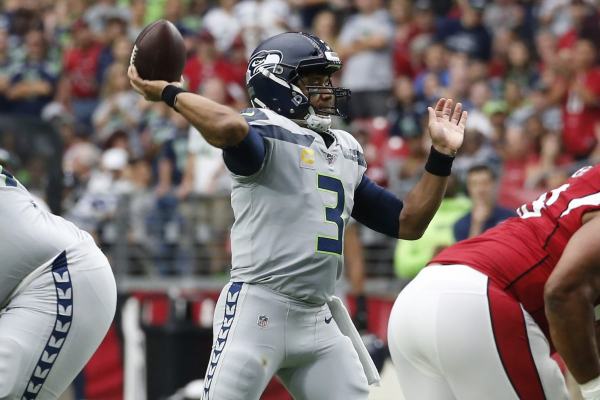 Thursday Night Football features an NFC West division showdown as the Los Angeles Rams (3-1) travel to CenturyLink Field to take on the Seattle Seahawks (3-1). With the San Francisco 49ers also getting off to a hot start, the NFC West seems loaded this year, meaning every matchup and every divisional win is all the more important.

Both teams will be looking for that early division advantage Thursday, so expect both teams to come out firing despite the short week. Kickoff for this one is scheduled for 8:20 pm ET.

After starting the season with three consecutive wins over the Carolina Panthers (30-27), New Orleans Saints (27-9) and Cleveland Browns (20-13), the Rams hit their first speed bump this last Sunday. In a loss to the Tampa Bay Buccaneers, the Rams’ secondary was scorched by Jameis Winston as the defense gave up a whopping 55 points. On the plus side, the Rams scored 40 points, but on a short week, expect Russell Wilson to be licking his chops if that is the way the Rams are going to play.

For the Seahawks, they started off their season with a win over Cincinnati (21-20), a win over the Steelers (28-26), a loss to the Drew Brees-less Saints (33-27) and a win this last week over the Cardinals (27-10). While they have played well, they are still looking to take another step, particularly on the offensive side. A rushing attack that was one of the most dominant in the league last year has gotten off to a bit of a slow start this time around.

Regardless, someone should come out of this one 4-1 and in a good position in the NFC West. The Seattle Seahawks come into this one as 1.5-point favorites playing at home. The over/under for total points scored is 49.5.

On the defensive side, it is Seattle that holds the upper hand. They rank 14th in the league, averaging 22.2 points per game (18 at home). The Rams are 26th in the NFL, allowing an average of 26 points per game (20 on the road).

Rams Hope To Get Defense Back On Track

While a 3-1 record is a good start, the Rams acknowledge that they have areas that definitely need to be improved on, and defense is one of the biggest. After giving up 55 points last week, the secondary is struggling and becomes a little weaker after Marcus Peters suffered a concussion after an interception returned for a touchdown last week. The defensive stat leaders for LA are John Johnson (37 tackles), Clay Matthews (five sacks) and John Johnson (two interceptions).

On the offensive side, Jared Goff has been pretty solid thus far. He has completed 111 of 173 passes for 1,254 yards and six touchdowns, though he also has six interceptions and eight sacks to date. His leading receivers are Cooper Kupp (32 catches, 388 yards, three touchdowns), Robert Woods (26 catches, 307 yards) and Brandin Cooks (19 catches, 296 yards, one touchdown).

The ground game has been almost nonexistent, which is perplexing, given that Todd Gurley is in the backfield. Despite his presence, he has still not shown to be the same running back since his woes at the end of last season. This year, he has rushed 49 times for 219 yards (4.5 average) and three touchdowns.

Like the Rams, the Seahawks are also trying to establish their ground game. Chris Carson, who was dominant last season, has rushed 67 times for 262 yards (just 3.9 yards per carry) with just one score. He has also had a bit of a problem with ball protection to start the season.

Through the air, Russell Wilson has been very efficient. He is 97 for 133 with eight touchdowns and no interceptions. He has been sacked 12 times through four games but has been solid otherwise. His leading receiver is Tyler Lockett, who has 26 catches for 328 yards and two touchdowns.

On the defensive side, the Seahawks have been pretty good. Their stat leaders to date are Bobby Wagner (45 tackles), three players with two sacks apiece (Rasheem Green, Quinton Jefferson and Mychal Kendricks), and two players with one interception apiece (Jadeveon Clowney and Bradley McDougald).

I will be the first to admit that last week’s debacle against the Tampa Bay Buccaneers was pretty disheartening for the Rams. Their offense was solid, but the defense was atrocious. Still, after last year’s run to the Super Bowl, I think last week was more of a blip on the radar as opposed to a true showing of their ability.

While Seattle has a nice record, I don’t know if I trust them consistently either. They lost to a Saints team without Drew Brees and barely squeaked by a brutal Cincinnati Bengals team. Really, I don’t necessarily love either team, which is why I am going with the team getting the points. For my money, I am taking the Rams and the 1.5 points.