Tampa Bay Wallops Rams In Los Angeles; Is This Worth Noting in NFC South? 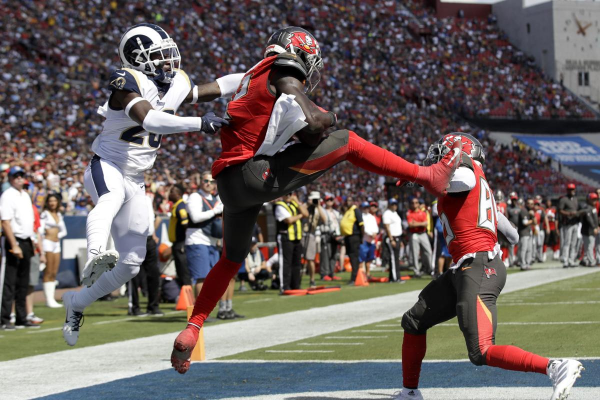 When looking through the slate of Week 4 NFL games, nobody was stopping and circling the Tampa Bay Buccaneers versus Los Angeles Rams as a game to watch. After all, the defending NFC Champs were at home against a team that had only picked up a single win through its first three games.

But we didn’t see the same Tampa Bay team that blew an 18-point lead in a loss to the previously winless Giants in Week 3. Instead, we watched quarterback Jameis Winston lead his team to 21 points or more in two separate quarters on the way to 55-40 win over the Rams.

In the end, Winston threw for 385 yards, four touchdowns, and one interception. Chris Godwin was on the receiving end of two of those TDs as he racked up 172 yards on 12 catches.

And in addition to intercepting Rams quarterback Jared Goff three times, the Bucs defense put the nail in the coffin when Shaquil Barrett caused Goff to fumble during a sack, which former Ram Ndamukong Suh picked up and returned for a touchdown.

Suh’s touchdown came with just over a minute to play as the Rams attempted to come all the way back against a Tampa Bay team that jumped out to a 21-point lead. The scoop and score was a big part of a 24-point fourth quarter that helped the Bucs hang on.

This wasn’t just a shocking result; this game has the potential to both save and define the season of the Tampa Bay Bucs as they improved to 2-2 while dropping the Rams to 3-1. However, it was far from perfect.

For example, Tampa Bay allowed 40 points on a whopping 518 yards of Rams offense. And while Goff turned the ball over four times, he also torched the Bucs defense for a career-high 517 yards and a pair of touchdowns.

The Bucs also let Los Angeles back into the game after a Cooper Kupp touchdown and a Winston pick-six brought the Rams within five in a game Tampa Bay previously led by a score of 45-27.

So, how should we look at this victory for Tampa Bay? Is this result one that will soon be forgotten as these two teams return to what we thought they were, or are the Bucs a team to watch in the NFC South?

It might have felt like a season lost if they Bucs had dropped to 1-3. Now, Tampa Bay feels like it has a legitimate chance to win the division after getting to .500 early in the 2019 season.

With the New Orleans Saints atop the NFC South with a record of 3-1, the Bucs sit in second with a 2-2 record that includes a win over the Panthers within the division. Carolina comes in third with another 2-2 record, followed by the 1-3 Falcons in fourth.

Having a win within the division is huge, but next week’s clash against the Saints in New Orleans is the biggest game yet for Tampa Bay. With the momentum of a big road win over the Rams, a victory over the Saints without Drew Brees would catapult the Bucs into a tie for first place and push their division record to 2-0.

If Winston can throw for 380+ yards for the third game in a row while better protecting the football against a good Saints defense, it’s certainly possible for the Bucs to place themselves in the driver’s seat of the NFC South by this time next week.

While the odds still heavily favor the Saints (-185) to win the NFC South, Tampa Bay has moved up to +500 and sits directly behind the Panthers (+450).

If Tampa Bay can win next week’s matchup, we’ll surely see the Bucs move closer the top of the list in the NFC South once again.