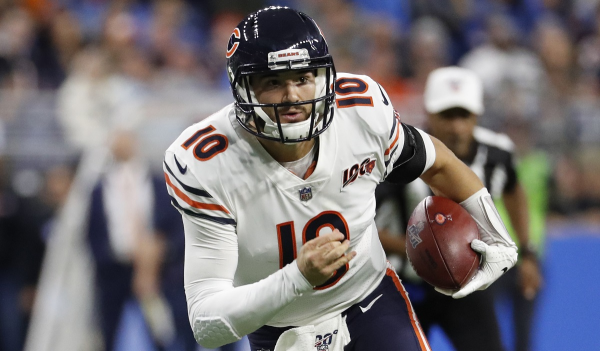 Thursday Night Football features a pair of 6-6 teams that are still fighting to try to claim a postseason berth as the Dallas Cowboys travel to Soldier Field to take on the Chicago Bears. For the Cowboys, there is a much easier path to the playoffs, as they hold a one-game lead on the Philadelphia Eagles in the NFC East and hold the tiebreaker at this point. Still, the Cowboys would love to create some separation going down the stretch.

The Bears considerably more work to do, as they are realistically vying for a Wild Card spot, but they sit two games behind even the second-place team in the NFC North (Vikings), so they essentially have to win out and hope for a lot of help. Kickoff for this one is scheduled for 8:20 pm ET.

For the Cowboys, it has been a bit of a bumpy ride the last few weeks, and it has head coach Jason Garrett likely updating his resume, as the lackluster performance has certainly caught the ire of owner Jerry Jones. Still, the Cowboys lead their division and simply hope to play their best football as the season closes. They come into this one having lost two in a row.

The Bears have actually won two in a row and three of their last four. They beat the Detroit Lions on Thanksgiving 24-20 and beat the New York Giants the previous week 19-14. It has certainly been an inconsistent year for the Bears, who had Super Bowl aspirations coming into the season but have struggled, particularly on the offensive side, throughout the year. Still, they are trying to win one game at a time to hopefully keep their postseason prayers alive.

The Cowboys come into this one as three-point favorites despite playing on the road. The over/under for total points scored currently sits at 43.

On the defensive side, both of these teams are ranked in the top 10 in terms of points allowed per game. The Bears are fourth, allowing an average of 17.3 points to opponents (16 at home). The Cowboys are eighth, allowing 19.7 points per game (19.2 on the road).

Despite losing on Thanksgiving, the Cowboys were handed a gift when they saw that the Eagles were upset by the Dolphins, keeping their one-game lead intact. With that extra boost, the Cowboys are in the driver’s seat and truly control their own destiny with their play. Trying to take advantage of this will be starting quarterback Dak Prescott, who is 298 for 447 for 3,788 yards, 23 touchdowns and 11 interceptions. He has also been sacked just 16 times. On the ground, Prescott has also rushed 38 times for 222 yards and an additional three scores.

Ezekiel Elliott leads the way on the ground for the Cowboys, rushing 227 times for 990 yards and seven touchdowns. He has also made 39 catches for 326 yards and a score.

Leading the way in receptions, though, is Amari Cooper. Cooper had to leave the game last week after taking a helmet to the knee but was able to finish the game and is expected to play Thursday. On the season, he has 64 receptions for 971 yards and seven touchdowns.

It has been a long, frustrating season for Mitchell Trubisky, but he still has a chance to right the ship for the Bears down the stretch. He has actually played better the last two weeks, throwing for over 300 yards in each, but that may have been more about his opponents than his game. Still, the third-year quarterback has gone 230 for 361 this season for 2,196 yards, 13 touchdowns and seven interceptions. He has also been sacked 26 times.

Through the air, Allen Robinson has certainly been the leader, as he has hauled in 71 catches for 850 yards and five touchdowns. One player to keep an eye out for, though, is Anthony Miller, as Trubisky and Miller seem to have gotten on the same page lately, and it has given the Bears a second legitimate threat at wide receiver. On the season, Miller has caught 38 passes for 489 yards.

On the ground, the Bears have been led by David Montgomery. Thus far this year, the rookie running back has rushed 172 times for 594 yards and five touchdowns.

This is a game I struggle with. On the one hand, Dallas has been pretty brutal lately. It limps into this game but still amazingly holds first place in the NFC East. Still, the Cowboys have the weapons on the offensive side to get the job done against a solid but not spectacular Bears defense.

For the Bears, they were only able to manage a 24-20 win over the Detroit Lions despite the Lions using a third-string quarterback. Trubisky has looked better of late, but I still claim that is more because of the opponents (Giants and Lions) than his actual ability. I wouldn’t blame anyone for taking a flyer on the Bears’ defense covering the spread, but for my money, I am taking the Cowboys despite laying the three points.