Cowboys Fall Flat On Thanksgiving Day, Give Eagles Chance To Even Up Division 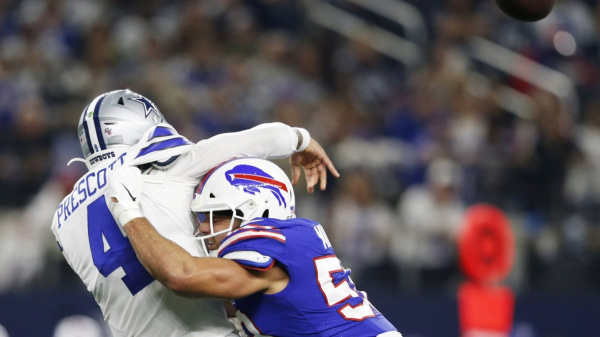 As America sat down to Thanksgiving dinner, the Dallas Cowboys opened their contest against the Buffalo Bills with a masterful, nine-play, 75-yard drive to go up 7-0. From that point forward, it was all Buffalo.

Although the Bills entered the contest with a record of 8-3, Dallas had reason to be optimistic.

First of all, Buffalo had beaten up on the weakest of NFL teamsfor all but one of its wins.

Meanwhile, the Cowboys were coming off a narrow loss to the AFC-leading Patriots in Foxborough on Sunday.

Yet the Bills would follow up a scoreless first quarter with 26 unanswered points while feasting on turnovers by Dak Prescott.

On back-to-back-to-back Dallas drives, Prescott was intercepted, then stripped on a drop back, and then led a drive resulting in a missed field goal to end the first half.

On the flip side, Bills quarterback Josh Allen led his team on six consecutive drives with a chance at points. Only a missed field goal stopped Buffalo from scoring on all six.

Allen would end the game with 231 yards and a touchdown through the air, as well as 43 yards and another TD on the ground.

Prescott finished with 355 yards, two touchdowns, and one interception, but his team fell to 6-6 on the season with the loss on Thanksgiving.

Dallas Trying To Give Division Away

Despite losing two straight and three out of their last four, the Cowboys remain in first place in the NFC East. However, it feels like Dallas is taking every opportunity it can to give the division away.

The 5-6 Philadelphia Eagles now go into Sunday’s matchup with the lowly Miami Dolphins with a chance to even up the division with a win. While Dallas will still own the head-to-head and division record tie-breakers, it’s the Eagles who have the easier schedule down the stretch.

None of Philadelphia’s final five opponents own a winning record at this stage, and they’ll get to take on some of the league’s worst teams. After Sunday’s game against the 2-9 Dolphins, the Eagles will play the 2-9 Giants, the 2-9 Redskins, the 6-6 Cowboys, and finish with the Giants again.

Counting New York twice, Philly will be going up against a schedule of teams that are a combined 14-42 on the season.

It all could very well come down to a Week 16 matchup between the Eagles and Cowboys, but Dallas faces the tougher path and will have to keep its head above water just to get to that game with a chance to win the division.

While the Eagles have the easier schedule to finish out the season, the Cowboys know they have plenty of talent and have already beaten the Eagles once.

In Week 7, Dallas destroyed Philadelphia by a score of 37-10 to take the NFC East lead – a lead they’ve yet to relinquish. However, the matchup this time will be in Philadelphia.

So, which team is the current favorite?

With odds of -125 to win the NFC East, the Cowboys remain the favorite despite their run of poor form. The Eagles trail closely behind with odds of +105.

When you look at individual teams and their pursuit of a playoff position, it’s no surprise that the odds for Dallas and Philly to reach the postseason closely mirror that of the division odds. With the 9-2 Seahawks and 8-3 Vikings running away with the Wild Card spots, a division title is likely the only way into the playoffs for the Cowboys and Eagles.

Right now, Dallas is sitting on odds of -140 to make the playoffs. Meanwhile, the Eagles own odds of +106 to reach the postseason.