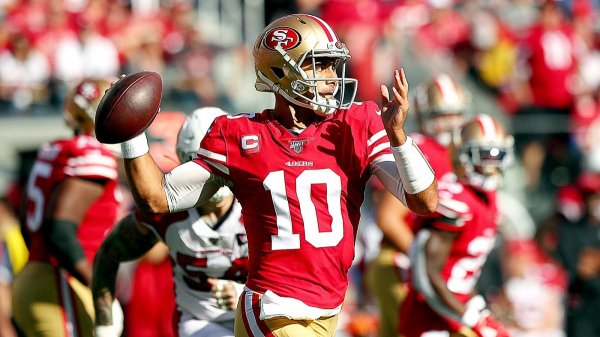 Sunday Night Football has a good game this week as the Green Bay Packers (8-2) will travel to Levi’s Stadium to take on the San Francisco 49ers (9-1). Both of these two are currently in control of their divisions but also have teams breathing down their necks in the Seahawks and Vikings. With that in mind, these two teams will be looking for a signature win on Sunday night. Kickoff for this one is scheduled for 8:20 pm ET.

The Packers have actually enjoyed a small break as they will be coming off a bye week for this one. Prior to the bye week, they had gone 5-1 in their last six games, including a 24-16 win over the Carolina Panthers in their last matchup. Their only loss in that span was a surprising 26-11 loss to the Los Angeles Chargers at the beginning of this month.

The 49ers have really gotten off to a strong start with a 9-1 record through their first 10 games. Their only loss came two weeks ago as the Seattle Seahawks beat them at Levi’s Stadium 27-24. It will be interesting to see how the Packers fare against the defense of San Francisco, as it has not seemed quite as dominant over the last few weeks. Over their last three games, the 49ers have allowed an average of 27 points. When you keep in mind that they have played the Cardinals twice in that span, it leads to a little concern.

The line seems to think this is mostly a pick ’em game, as the San Francisco 49ers come in three-point favorites (likely due to the fact they are the home team). The over/under for total points is set at 48.

With an extra week to prepare for this one, the Green Bay Packers are hoping that Aaron Rodgers and the rest of the team can upset the San Francisco 49ers on the road. On the season, Rodgers is 225 for 347 for 2,718 yards, 17 touchdowns and two interceptions. He has been sacked 22 times over the span of 10 games. He has also rushed 27 times for 109 yards and another score.

Rodgers’ favorite target this season has been Davante Adams. Despite having missed time, Adams has 39 receptions for 537 yards. Aaron Jones has been the next most productive pass receiver out of the backfield as he has 35 catches for 354 yards and three scores.

Jones also leads the Packers on the ground, rushing 135 times for 589 yards and 11 touchdowns. Jamaal Williams is next up on the ground with 65 rushes for 291 yards and a score.

Green Bay’s defense has been a bit inconsistent this season, and the 49ers are hoping to take advantage of it. To do so, they will look for Jimmy Garoppolo to lead the offense. On the season, Garoppolo has thrown for 2,478 yards, 18 touchdowns and 10 interceptions, but he has also been sacked 19 times.

One of the questions for Garoppolo, though, is who he will have around him. Tight end George Kittle and running back Matt Breida are both questionable for this one. Breida has led the rushing attack for the 49ers, although Tevin Coleman (409 yards, five touchdowns) has also been productive. Kittle has missed the last couple weeks, and with 46 catches for 541 yards and two scores, would be a big target absent for the 49ers if he can’t go again this week.

Also on the injury front, Dee Ford is out for this one. The defensive end suffered a hamstring injury last week, a big blow for the 49ers defense.

Taking Rodgers And The Points

The San Francisco 49ers have been awfully impressive this season; however, they have been showing some chinks in the armor as of late, and the injury bug has been brutal. While there have been some concerns, the biggest reason I like the Packers in this one is that Rodgers tends to shine in the primetime spotlight, and he and the Packers get an extra week to prepare for this one coming off the bye week. For my money, I am taking the Green Bay Packers and the three points.