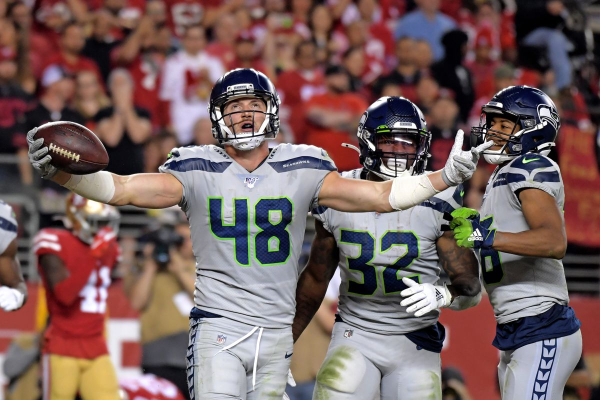 The Seahawks needed every second of regulation and overtime to take down the last remaining undefeated team in football, and they did so in a midseason Monday Night Football classic.

For San Francisco, which was without its best offensive weapon in George Kittle, it was kicker Robbie Gould who may have been missed even more. After intercepting Seahawks quarterback Russell Wilson in San Francisco’s red zone on the first drive of the overtime period, the 49ers drove down the field led by quarterback Jimmy Garoppolo, who set his team up for a game-winning 47-yard field-goal attempt. Unfortunately for San Francisco, backup kicker Chase McLaughlin pulled the kick far left of the upright.

After swapping possessions, Seattle ended up kicking the actual game-winner as overtime expired, dropping San Francisco to 8-1 on the season. It was a harsh ending for McLaughlin, who drilled a 47-yarder at the end of regulation to send the game to overtime in the first place.

In the end, both teams squandered chances to win the game earlier on, and now the NFC West is tighter than ever at the top.

Is NFC West The Best?

At this time last year, the Rams had just beaten the Seahawks in a Week 10 battle that moved Los Angeles to 9-1. The Rams would go on to earn a 13-3 record in the regular season before beating the Cowboys and Saints on their way to a Super Bowl appearance.

This year, the Rams are 5-4 and ahead of only the rebuilding Cardinals in the NFC West.

Things can change quickly in the NFL, and the 49ers are this year’s best example, bouncing back from a four-win season in 2018 to start the 2019 season with eight wins in a row. Even after Monday night’s overtime loss, San Francisco is still leading the NFC West with a record of 8-1.

At +130, the 49ers own the second-best point differential in the NFL behind only New England. Much of that great differential is the result of a dominant defense, which has only allowed 129 points through nine games.

Either way, the NFC West has three teams in the hunt for a playoff spot, one of which is the defending NFC champion and the other two that are Super Bowl contenders. It’s safe to say no other division in the NFL can match that.

Within the NFC West, the 49ers remain the favorite to win the division with -250 odds. They’re followed closely by the Seahawks, who own +225 odds, and then the Rams are following behind with odds of +1200 to win the NFC West.

When it comes to the entire NFC, the West holds three of the top eight contenders in the conference.

New Orleans and San Francisco are the favorites to win the NFC, with the Saints’ +300 odds edging out the 49ers’ +325 odds. The only other team in front of the Seahawks are the Packers at +500, as Seattle is getting +750 odds of winning the conference.

Out of the top half of contenders within either conference, only the NFC West has three representatives.