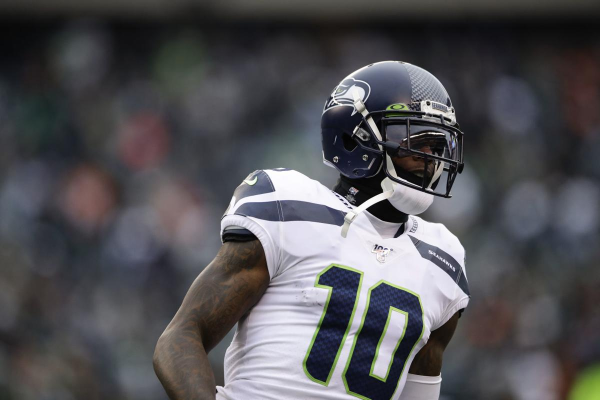 In the NFL, you can always count on a few things: the refs are going to miss some calls, the Patriots will be in the playoffs, and Josh Gordon has a suspension just around the corner.

Well, the one-time Pro Bowl receiver just turned that corner once again, as he’s been suspended for violating the league’s policies on performance-enhancing substances and substances of abuse.

This suspension, which was announced Monday, is Gordon’s sixth since 2013.

According to reports, Gordon was aware that a suspension could be handed down. However, it’s unclear what the substance or substances in question are, and whether or not Gordon’s violation of the NFL’s policies occurred during his time with the Seahawks.

This is Gordon’s fifth suspension for some form of substance abuse, and it came just one day after Gordon showed flashes of his unique talent. In Seattle’s win over Carolina on Sunday, Gordon made a beautiful diving catch that netted 58 yards.

However, the Seahawks will be forced to go forward under the impression that they’ll have to play the rest of the season without the services of Gordon, who served as the team’s third receiver behind Tyler Lockett and DK Metcalf.

After being released off injured reserve by the Patriots, Gordon spent six weeks with Seattle before receiving this latest suspension.

Timeline of a Plagued Career

Under different circumstances, Gordon may have found himself in the same discussion as Julio Jones or DeAndre Hopkins as one of the best receivers in the NFL over the past five-plus years. Instead, a player who’s shown flashes of greatness has failed to stay eligible to play.

Many of those flashes of greatness came in 2013 when Gordon led the NFL in receiving yards despite playing only 14 games of the 16-game season. The playmaker was nearly impossible to cover and then difficult to bring down after the catch when he was at his peak.

Yet Gordon’s time at the top of the mountain was short-lived. In 2014, Gordon missed 11 games of the season due to a pair of suspensions.

That marked a preview of what was to come, as the Cleveland receiver then missed the 2015 and 2016 seasons for violating the league’s substance-abuse policy. During that period of time, it was unclear whether or not Gordon would ever see an NFL field again.

However, Gordon would play for the Browns again in 2017, when he made it on the field for five games after being reinstated.

The troubled Gordon saga would continue in Cleveland when the receiver announced he would miss the beginning of Browns training camp for mental health reasons. Gordon’s time in Cleveland would soon come to an end, as the receiver was then traded to New England in August of 2018.

Before 2018 would come to a close, Gordon was suspended indefinitely for violating terms of reinstatement under the league’s substance-abuse policy.

After being reinstated by the NFL in the middle of August this year, Gordon was then placed in injured reserve for a knee injury. The Patriots would soon release the receiver, who was then claimed by the Seahawks on waivers.

In his time with the Seahawks, Gordon failed to make a significant impact. Acting as the team’s third receiver, Gordon had seven catches for 139 yards.

So, while Gordon may have played a bigger role with the team down the stretch, it doesn’t appear that his presence on the field will be a fatal blow to a team that’s earned a record of 11-3 and sits atop the NFC.

Even when Gordon was claimed by Seattle, oddsmakers didn’t expect the receiver to have a significant impact. When he joined the Seahawks, the team’s Super Bowl odds remained unchanged at +3000.

At this point, Seattle is very much a part of the conversation regarding the teams poised to make a Super Bowl run. At +900, the Seahawks own the sixth-best odds to hoist the Lombardi Trophy.

If Seattle can take down San Francisco in the final week of the season and earn home-field advantage throughout the NFC playoffs, expect those odds to increase sharply.