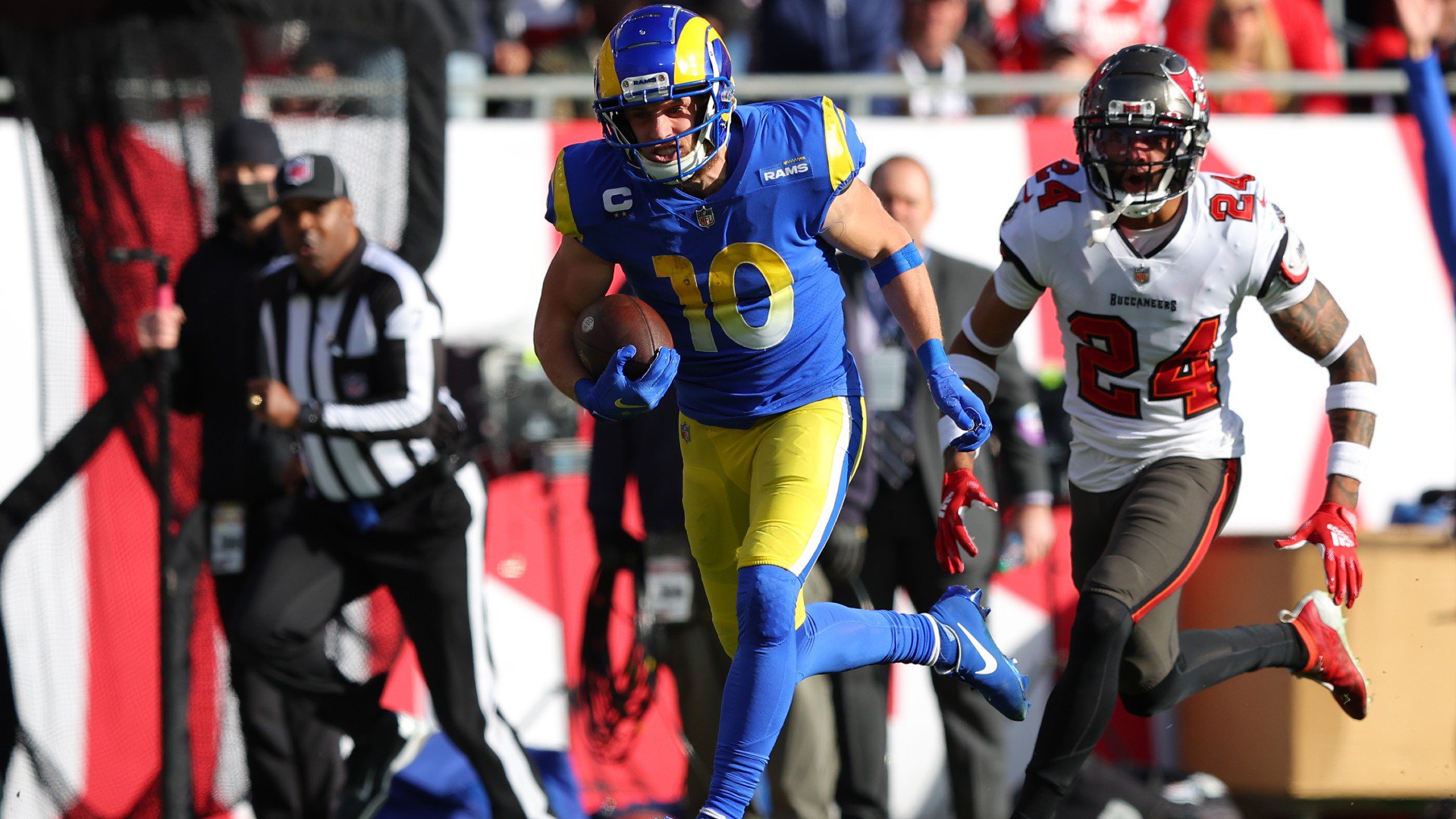 In two meetings in the NFL regular season, the San Francisco 49ers had the Los Angeles Rams’ number. But none of that will matter to the Rams if they can win Sunday’s NFC Championship Game matchup to secure the biggest home game of them all.

In Week 10, the 49ers throttled the Rams 31-10 at Levi’s Stadium, which kick-started a turnaround after a 3-5 start for San Francisco. But to cap that turnaround with a trip to the playoffs, the 49ers needed to win at SoFi Stadium in Week 18. And win they did, forcing overtime with a last-minute touchdown and taking the win on a Robbie Gould field goal.

Which team will move on to face the winner of the Bengals-Chiefs matchup? Will the third time be the charm for the Rams, or will the Niners pull off the season sweep?

Can Deebo and the Defense Lead the Niners to a Championship?

Two big reasons that the 49ers were able to turn it around after their subpar start were star offensive weapon Deebo Samuel and stout defense.

Those two reasons were prominent parts of both regular season wins over the Rams and were also key to the playoff wins over the Dallas Cowboys and Green Bay Packers.

Samuel is one of the NFL’s top playmakers, finishing 5th in the NFL in receiving yards (1,405), 1st in yards per catch (18.2), and second in yards after the catch (780). He was also San Francisco’s second-leading rusher, tallying 365 yards on only 59 attempts. Samuel finished tied for seventh in the NFL in touchdowns with 14 (six receiving, eight rushing).

Samuel’s playmaking prowess has continued in the postseason, and it is no surprise that he is one of the leading Super Bowl MVP contenders.

In the 23-17 win over the Cowboys, he had three catches for 38 yards and ten carries for 72 yards and a touchdown.

In the 13-10 win over the Packers, he had three catches for 44 yards and ten carries foe 39 yards. On the final drive, he had a 14-yard catch for a first down and a nine-yard run for a first down to get the Niners in position for Gould’s game-winning field goal.

Can the Rams stifle Samuel? Previous evidence is not overly encouraging. Last season was an injury-hit campaign for him, as he was limited to only seven games. But over half of his catches (17 of 33) and receiving yards (199 of 391) came in two games against the Rams.

Along with a steady diet of Deebo, the 49ers have excelled against two of the NFL’s top offenses.

The Cowboys led the NFL in scoring (31.2 PPG) and yards per game (407 YPG) in the regular season. However, they were held to only 17 points and 307 yards on Super Wild Card Weekend.

The Packers were 10th in scoring (26.5 PPG) and yards per game (365.6) but possessed the likely NFL MVP in Aaron Rodgers. But after scoring a touchdown on their opening drive of the game, the Packers managed only three points the rest of the way and tallied only 263 yards on offense.

The 49ers were sixth in the NFL in sacks with 48, and their pass rush has been even more punishing in the playoffs. Both the Cowboys and Packers allowed under two sacks per game in the regular season, but the 49ers sacked Rodgers and Dak Prescott five times each.

Dating back to the regular season finale against the Rams, that is now three straight five-sack games for San Francisco. And over their last eight games, the Niners have recorded 34 sacks. Harassing Matthew Stafford early and often again will go a long way toward a win on Sunday.

Will the Rams Have a Letdown After Eliminating the Champs?

Stopping Tom Brady short of a Super Bowl or conference championship game is no easy feat. But the Rams did that, and to boot, they did it on the road.

Now, can they follow it up by securing a home Super Bowl?

Dispatching the Cardinals as they did on Super Wild Card Weekend was certainly impressive. But it is one thing to beat the Cardinals and another to knock out the champs and one of the most accomplished individuals in professional team sports.

And the Rams very nearly didn’t do it, inexplicably squandering a 27-3 lead with a rash of second-half turnovers. Fortunately, they, not Brady, had the ball last, and they made the most of it.

The 49ers don’t win by forcing a lot of turnovers. But what they are is punctual and opportunistic.

Against the Cowboys, they turned a third-quarter interception into a touchdown that would prove decisive.

On the Packers’ second drive, the 49ers forced and recovered a fumble to thwart a potential scoring drive. Had Green Bay made it 14-0 that early, San Francisco may have been done for.

Four fumbles almost did the Rams in against the Bucs, but interceptions are a major concern for Stafford. He tied Trevor Lawrence for the NFL lead with 17, and he threw two in each of the regular season meetings with the 49ers.

With their defense, the Rams can put the 49ers in a hole just as they did the Cardinals and Bucs. But Stafford and the offense need to do their part and not give San Francisco extra or easy opportunities to score.

Is Putting the Game on Jimmy G a Key to Victory?

The 49ers have reached the NFC Championship Game without Jimmy Garoppolo playing all that well. Can they win on Sunday and in the Super Bowl with that continuing to be the case.

Also, while Jimmy G did successfully lead the 49ers back for the Week 18 win, he threw two picks in that game that killed potential scoring drives. In the postseason, he has completed 27 of 44 passes for 303 yards (6.9 yards per attempt), no touchdowns, and two interceptions. That isn’t sustainable, even if you subscribe to the adage that defense wins championships.

He certainly has a knack for making plays right when he needs to, it must be said. He has in the postseason, and he did in leading the Niners back from a 17-0 deficit at SoFi Stadium last month. But the Rams will fancy their chances of closing it out this time if they put him in that position again.

In both regular season wins the 49ers were able to limit the Rams’ potent offense.

Can the Niners shut them down for a third time this season? Defensive coordinator DeMeco Ryans is being linked with multiple head jobs, and that would–or should–all but ensure he is one of them in the near future.

But Ryans will be free to pursue such opportunities after Sunday, as the Rams will take the head-to-head win that matters most.

Perhaps the 49ers have the Rams’ number like the Saints have had the Bucs’ number over the past two seasons (outside of their playoff matchup last year). Sometimes one team just happens to have another team solved.

But last week’s win over the Bucs will prove to be a major moment for the Rams. Creating problems for themselves has cost them multiple times this season and almost did again in Tampa. But after letting the Bucs come all the way back to tie the game, they didn’t panic and ensured that Brady would not have an extra period to pull out a win.

Mental aptitude and fortitude are almost as important as anything else at this time of year. The 49ers have displayed plenty, giving plenty of reason to be confident in their continued success. But so have the Rams, and in this spot, they will deliver.

Look for the Rams to take lessons learned from last week and from their first two meetings with the 49ers and book a Super Bowl date at a very familiar venue.

The 2022 Formula 1 season is only six races deep, but the race for this season’s championship alerady appears to be down to just two drivers. Last season, Red Bull driver Max Verstappen claimed his first Formula 1 World Drivers’ Championship in highly controversial circumstances, with Lewis Hamilton denied what would have been a record-breaking END_OF_DOCUMENT_TOKEN_TO_BE_REPLACED