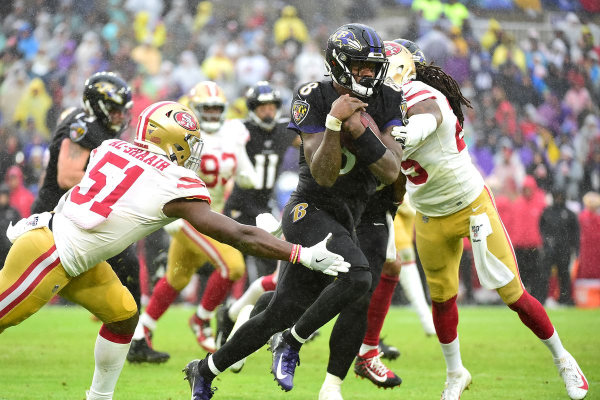 It took every last second of a wet, nasty game between the San Francisco 49ers and Baltimore Ravens to separate two of the NFL’s best teams. If Sunday’s game in Baltimore is indeed a preview of what’s to come on Feb. 2, we’re in for a wild ride on Super Bowl Sunday.

This contest felt like old-school football, with both teams relying on the run game in the driving rain and strong wind. The weather forced some sloppy play, but an entertaining game had both squads deadlocked after the first and third quarters.

MVP candidate Lamar Jacksonwasn’t great through the air, but he was unstoppable on the ground for chunks of the contest. While he completed only 14 of 23 passes for 105 yards and a touchdown, Jackson rushed for 101 yards and another TD.

The NFL’s top-ranked defense kept up with Jackson and the Baltimore offense nearly every step of the way. From San Francisco’s perspective, the play of the game occurred when defensive back Marcell Harris was able to shed his blocker and strip Jackson as he was scampering down the field for another first down.

For the 49ers, running back Raheem Mostert rushed for a career-high 146 yards with one touchdown, and quarterback Jimmy Garoppolo threw for 165 yards and a TD of his own. Yet it wasn’t enough to overcome the Ravens in Baltimore, which won the 20-17 contest with a 49-yard field goal from Justin Tucker as time expired.

Baltimore’s victory at home on Sunday afternoon was no normal win. In addition to solidifying themselves as a true Super Bowl contender by taking down another favorite, the Ravens gained control of the AFC’s top seed.

By defeating San Francisco, Baltimore moved to 10-2 on the season. And in addition to earning a win over the 49ers, the Ravens also own a win over New England after coming out on top in a 37-20 contest several weeks ago.

On Sunday evening, the Patriots went into Houston for a clash with the Texans. By dropping that contest by a score of 28-22, New England fell to 10-2 on the season, matching Baltimore’s record.

And so, with the head-to-head tiebreaker in their pocket, the Ravens now gain control of first place in the conference. If they can hold on to that position for the remainder of the season, the Ravens will have home-field advantage throughout the AFC playoffs.

The only way New England would be able to host a potential AFC Championship Game between the two would be to finish the regular season with a better record than Baltimore.

Although this weekend’s matchup between Baltimore and San Francisco didn’t feature high-powered offenses or perfect execution, it also didn’t show us anything that should change our minds about the fact that these are two of the NFL’s best teams.

However, Super Bowl Sunday is a long way away, and both of these teams face stiff competition in their respective conferences.

For Baltimore, the biggest obstacle standing between it and a trip to the Super Bowl appears to be the 10-2 Patriots. However, the Ravens could run into trouble if they get matched up with the likes of 8-4 Houston, 8-4 Kansas City, or 9-3 Buffalo in the playoffs.

In the NFC, we should have an outright favorite following next week’s games, as the 49ers will go into New Orleans for a showdown with the Saints. Right now, both teams own a record of 10-2 and are tied for the conference lead, though Seattle could tie both teams with a win on Monday night.

So, did we just witness a preview of the Super Bowl? According to the odds, we very well may have.

After Sunday’s results, the Ravens are the new favorite to win it all this year with odds of +260. Those odds are better than that of any other team in the league, including the Patriots (+350).

In the NFC, the 49ers and their +700 odds to win the Super Bowl trail only the +550 odds of the Saints. And if San Francisco can earn a win in New Orleans, those odds are likely to flip.