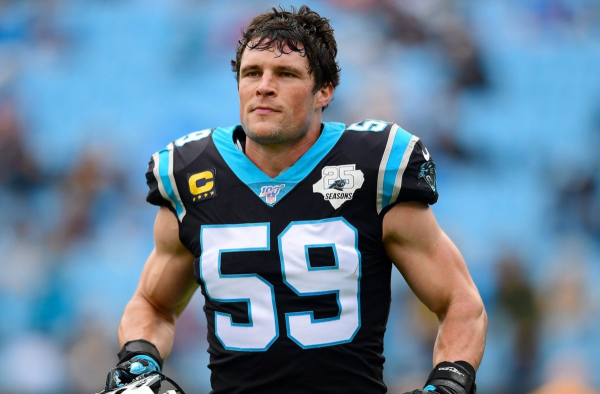 Of all the news to break on Tuesday, the most impactful to many in the world of sports was the retirement announcement of Carolina Panthers linebacker Luke Kuechly.

Kuechly made the announcement via a video posted on social media in which he said, “I still want to play, but I don’t think it’s the right decision.” Although Kuechly never explicitly mentioned his struggles with head injuries, many suspect the linebacker’s decision is due in large part to the concussions that caused him to miss seven games from 2015 to 2017.

Retirement rumors surrounded Kuechly after the linebacker was carted off the field in tears during a Thursday Night Football game in 2017 when he was ruled out with a concussion. That was Kuechly’s last documented concussion.

Kuechly, who was selected ninth overall in the 2012 draft, said his decision to leave the game had nothing to do with either the firing of former Carolina coach Ron Rivera or the hiring of new head coach Matt Rhule.

In his video message, Kuechly said, “There’s only one way to play this game since I was a little kid — play fast, play physical and play strong. And at this point, I don’t know if I am able to do that anymore.”

And so, the career of one of the best linebackers over the past decade has come to an end.

Since entering the NFL after an impressive collegiate career at Boston College, Kuechly made a lasting impact at the professional level.

Kuechly’s 1,092 tackles since becoming a Panther in 2012 are the most in the NFL over that span. In that time, Kuechly also owns the most interceptions (18) and the fifth-most tackles for loss (75) among linebackers.

Out of his eight NFL seasons, Kuechly earned a Pro Bowl selection on seven occasions. And in addition to being selected as a first-team All-Pro five times, Kuechly was named the NFL Defensive Player of the Year in 2013.

Kuechly also played a major role in Carolina’s Super Bowl run in 2016. In playoff games against Seattle and Arizona, Kuechly returned an interception for a touchdown in each.

Now, Kuechly is likely to join the likes of Calvin Johnson and Rob Gronkowski as players to experience an “early retirement,” while still expected to be admitted into the Hall of Fame.

Should Carolina Look For Kuechly’s Replacement In Draft?

After a 5-11 season in 2019, the Panthers currently own the seventh pick in the 2020 NFL Draft. With a number of exciting college players joining the professional ranks, should Carolina be searching for Kuechly’s replacement in the first round?

Much of what the Panthers do in this year’s draft will likely depend on the philosophy of Rhule, especially with concerns surrounding quarterback Cam Newton.

If Rhule and Carolina expect to move on from Newton in the near future, perhaps a quarterback would be the more pragmatic choice in a draft that features the likes of Joe Burrow, Tua Tagovailoa, Justin Herbert, Jake Fromm, and more.

However, Carolina would also be wise to reload a defense that’s now going to be without its star linebacker.

While the Panthers would likely be reaching with the seventh overall pick to select the likes of linebacker Kenneth Murray (Oklahoma) or linebacker Zach Baun (Wisconsin), they have more appealing choices if they eye a selection for the defensive line.

The dream scenario for Carolina would be getting its hands on Ohio State defensive end Chase Young. However, because Young owns the second-best odds of being taken first overall at +1200, he isn’t likely to fall beyond the top five.