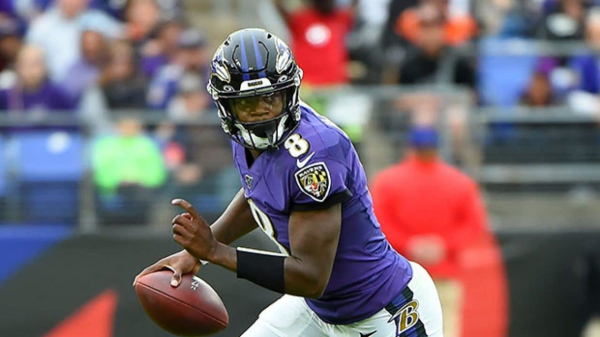 Week 7 of the NFL season brings a really interesting slate with a lot of wide receiver options and very few running back options. This means that we can really exploit some ownership angles in GPPS, so that will be the focus here.

This slate presents a few clear options at QB. Lamar Jackson is the top option up top against Seattle. The Seahawks defense will give up a few big plays with a sketchy secondary at times, and the Ravens have been able to hit a few big plays this season with Mark Andrews and Marquise Brown, who I expect to play in this game.

Jackson has flashed his rushing upside in close games throughout his career, and that is what I am banking on here. Jackson is the top cash option if you are looking to pay up.

The other QBs that I want to target in tournaments are from two game stacks. Kyler Murray vs. Daniel Jones ande,Jared Goff vs. Matt Ryan are both great spots for GPP winning upside and that is where the majority of my attention will be in GPPs. Each team has a lot of interesting targets and different options to run stacks with.

The running back position is really concentrated as of right now, but some recent injury news may have opened up the player pool a bit. Early in the week, it looked as though Leonard Fournette and Kerryon Johnson would be the chalk because they simply get more usage than their price tag would suggest.

I do think that these two will still be heavily-owned, and for good reason, but I like pivoting away for upside plays in GPPs. With Alvin Kamara being ruled out, I like Latavius Murray to see a lot of work at the same price as Johnson on DraftKings.

If you are looking to be different, I think you need to pay up or pay down at RB this week. I like Saquon Barkley as part of a game stack this week, and I like backs like Zeke Elliott, who still has two-to-three-TD upside if everything falls right.

The other interesting spot on the slate is Chase Edmonds. Edmonds has looked good in limited snaps recently, and now David Johnson is a game-time decision. According to Arizona coach Kliff Kingsbury, if the game was on Friday, Johnson would not have played. I think Edmonds is the best play on the board if that is the case.

The massive chalk at receiver will be T.Y. Hilton in a matchup that he has smashed many times before. While this isn’t always predictive, I do think this raw matchup is great for Hilton, and he is likely the chalk that I will eat because of his elite upside in this spot, along with his relative safety.

My two favorite receivers at the top end are Michael Thomas and Will Fuller because I think that their impact will be underrepresented in ownership. Fuller has been the focus of the Texans offense for three weeks, and I will continue to ride him until they decide to switch back to DeAndre Hopkins.

For Thomas, the loss of Kamara should make him even more heavily targeted, and he is one of, if not, the best receivers in the league at getting open regardless of the coverage. The ownership will overreact to the Bears defense in this spot where the Saints are expected to be trailing without their second-leading receiver.

On the low end, I think I will be riding Allen Lazard or a Packers receiver that is not out between Marques Valdez-Scantling and Geronimo Allison. I hope that they both miss the game, which allows me to just go very overweight on Lazard in a situation that the field will not be too high on.

Evan Engram is in a matchup that has given up massive yardage to the TE position every single week, and this week should be no different with Engram’s talent. However, there are a few other spots to like in tournaments.

Darren Waller is just too cheap across the industry for his involvement in the offense. Waller has had bad touchdown variance thus far, and once that turns around, he will be a clear top-five TE in fantasy.

Hunter Henry might be cash-game chalk after his eight-reception game in primetime, and a lot will depend on ownership here. I like Henry and the Chargers a lot, but I don’t think that this is a great spot to load up on high ownership. I would not be surprised to see low efficiency and a low overall snap count in this game, making it bad for fantasy as a whole.