Brown Released from Patriots; What’s Next For Embattled WR? 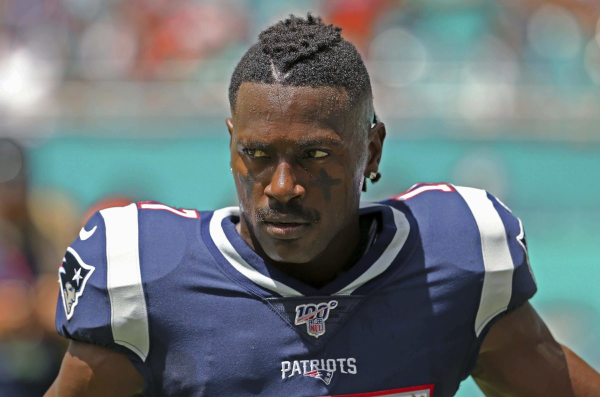 The Antonio Brown saga is far from over.

With the latest in the Antonio Brown media circus being the fact that he got cut, it’s another case of he was who we thought he was. After just one game in a Patriots uniform, Brown was cut after news surfaced regarding an off-the-field incident he had with a female companion some time ago.

While there is still a nebulous fog of controversy surrounding the case, the ultimate destiny of Brown, particularly in the NFL, is still a bit unclear.

While he was not added to the NFL’s exempted player list, there is still not much that’s clear regarding the legal situation, which is rumored to be the deciding factor that potential suitors have for him. So what’s next for Antonio Brown?

When news broke that Brown was cut from the Pats, a lot of people were convinced that it was the end of the road for him. New England, a destination that has served as a landing spot for many controversial figures, many of whom were thought to be completely untouchable, normally doesn’t jettison people overnight, particularly with the caliber of talent that Brown has.

That said, when he was cut, immediately, memes, jokes, and all sorts of clamoring about his NFL career being over were, frankly, greatly exaggerated.

In all honesty, Brown — while facing possible legal consequences — has not been formally charged with a crime or faced any sort of “smoking gun” video or media release on the level of a Tyreek Hill or a Ray Rice. While Hill was eventually able to return to the league, many said Rice never would, and while he never did, it should be noted that until there is a smoking gun on the tier of his eventual pariah-like designation, don’t expect it to be over for Brown.

He is incredibly talented and gifted to be ignored. There is going to be a desperate team looking to add star power, and it remains to be seen that besides the distractions he brings, if he is able to gel with a team.

There are a lot of questions about his eventual destination. One of the prime destinations that has been speculated has been the New York Jets. The Jets are absolutely dreadful, and after losing their first- and second-string quarterbacks, are left to start untested and tremendously green quarterback Luke Falk, the former Washington State standout who has gotten rave reviews from teammates and scouts alike.

Adding Brown to the Jets would pair him up with fellow former Steeler, Le’ Veon Bell, who famously sat out an entire season in a failed attempt due to contract negotiations. Holdout or no holdout, Bell has shown he’s still a very gifted runner, and if the Jets were able to add AB, their horrific passing attack would get a little bit better, albeit at the cost of much more of a media circus.

It should also be noted that if a contender were to be able to get Brown, it would have to be a team that is willing to sacrifice the possibility of chemistry to add him to a roster. The fact of the matter is, superstar wide receivers are tremendously overvalued.

They are better for business owners and media companies looking to fill air time, but for a team seriously looking to win a championship, frankly, a good system and an even greater defense reigns supreme, along with a superstar quarterback.

As obvious as that is, it will not stop front offices from making the same mistake over and over again, so with that in mind, expect Brown to be coming back to an NFL team near you sooner, rather than later.