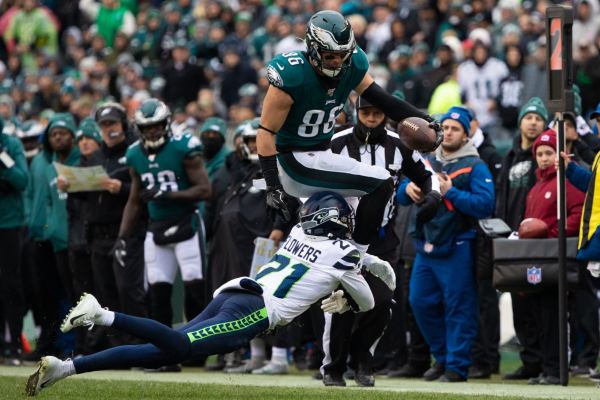 Monday Night Football features a showdown of NFC East rivals when the New York Giants (2-10) travel to Lincoln Financial Field to take on the Philadelphia Eagles (5-7).

Most of the time, when talking about a 5-7 team, you are looking at a squad hoping to rebuild for the next season. For the Eagles, you are talking about a team that still is very much alive to win their division. With the Cowboys having lost Thursday night, the Eagles could move into a tie for first place with a win, as both teams would be 6-7 (although Dallas currently has the edge in head to head wins). With that in mind, this is a must-win for the Eagles.

For the Giants, this becomes more of a farewell tour, as long-time quarterback Eli Manning is set to take over duties under center after an injury to Daniel Jones. Kickoff for this one is scheduled for 8:15 pm ET.

This has been a brutal campaign for the Giants that has been more about seeing what you have for next year than it has been about competing. That was decided early in the season when, after two straight losses, Manning was replaced with recently drafted Jones. Now, Manning will have the chance to say goodbye under center once more as Jones finds himself out with an ankle injury. New York comes into this one having lost eight in a row. In fact, its last win was a 24-3 win over the Redskins back at the end of September.

It has been quite the inconsistent season for the Eagles. Nothing illuminates this more than last week’s result. With an opportunity to move into a tie for first last week, and facing a bad Miami Dolphins team, the defense laid an egg and gave up 37 points in a 37-31 loss. That now makes three straight losses, including setbacks to the Seahawks and Patriots. The Eagles’ last win was at the beginning of November against the Bears (22-14).

Despite the poor play of the Eagles, they still come into this one as 9.5-point favorites playing at home. The over/under on total points scored is set at 45.

It is unknown how long Jones will be out for, but what we do know is that, if even for just one start, Manning will get another opportunity to get under center for the Giants. In a storied career that goes back to 2004, the 38-year-old is hoping that if this is the last game he plays, he can at least make it a memorable one. In the first two games this season, Manning went 56 for 89 for 556 yards, two touchdowns and two interceptions.

The Giants’ leading receiver has been tight end Evan Engram, but he will likely be out for this one. One player who Manning didn’t have at his disposal earlier in the season, though, is wide receiver Golden Tate, as Tate had to serve a four-game suspension to open the season. Since then, he has 36 catches for 450 yards and four touchdowns.

Probably the most dynamic playmaker for the Giants, though, is running back Saquon Barkley. On the season, Barkley has rushed 137 times for 544 yards and two scores. He has also assisted in the passing game as he has 38 catches for 291 yards and another score.

Like last week, if you are an Eagles fan, you have to look at this matchup as a must-win. Unlike last week, though, you are hoping that your team can actually win it this time. To do so, they will look to ride quarterback Carson Wentz, who is 271 for 434 for 2,840 yards, 20 touchdowns and seven interceptions. He has also been sacked 30 times.

The Eagles’ most consistent receiver has been tight end Zach Ertz, with 70 receptions for 736 yards and three touchdowns. Next up has been veteran Alshon Jeffery with 43 catches for 490 yards and four scores.

Jordan Howard has led the running game with 119 carries for 525 yards and six scores. Going into this one, though, Howard is questionable. If he can’t go, the Eagles will likely turn to Miles Sanders, who has 116 carries for 520 yards and a score.

Hard To Bet Either Side

This one is hard to bet. On one hand, you have a Giants team that has been absolutely dismal this year, going just 2-10, and you have an aging quarterback that hasn’t played for 10 weeks starting the game. On the other hand, you have the Eagles, who are in contention for a playoff spot but are just 4-8 against the spread. Really, when it comes to these types of matchups, I have to go with the team getting the points, especially when it is over a touchdown spread. For my money, I am taking the Giants and the 9.5 points.