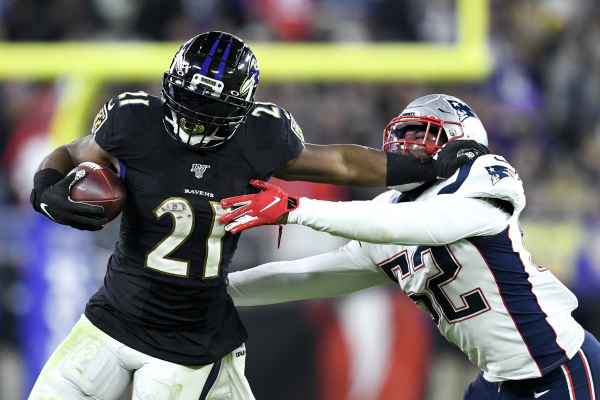 Monday Night Football features a battle of the AFC North versus the NFC West as the Baltimore Ravens (8-2) travel to Los Angeles Memorial Coliseum to take on the Los Angeles Rams (6-4). Both of these teams are trying to contend for a playoff spot, so every game at this point is crucial.

The Ravens sit atop the AFC North with the Pittsburgh Steelers behind them at 5-5. The Rams have a bit more work to do, as they sit in third in the NFC West behind the 49ers and Seahawks. Kickoff for this one is scheduled for 8:15 pm ET.

Baltimore has been absolutely rolling of late, winning six in a row, including a 41-7 drumming of the Texans last week. The Ravens’ offense has been particularly solid, as they have scored 30 or more four weeks in a row and 40 or more over the last two weeks. They will look to keep it going against Aaron Donald and the Rams’ defense Monday.

For the Rams, this has been a year of inconsistency thus far. They have gone 4-4 in their last eight games, although they have won three of their last four games. Last week, against the Chicago Bears, they won 17-7. They have been dealing with some absences from the offense, as both Brandin Cooks and Robert Woods were out last week, but they hope to get the offense going against a much-improved Baltimore defense.

The Baltimore Ravens come into this one as three-point favorites despite playing on the road. The over/under for total points scored currently sits at 46.5.

On the offensive side, the Baltimore Ravens have been the best team in the league this year in scoring. They currently sit atop the list, averaging 34.1 points per game (38.4 on the road). The Rams come in 11th, averaging 24.3 points per game (22.8 at home).

If the MVP were to be decided today, there is a good chance that the Ravens quarterback Lamar Jackson would win it. Jackson has been sensational this year, going 185 for 279 for 2,258 yards, 19 touchdowns and five interceptions. In 10 games, he has been sacked 18 times.

The passing stats don’t tell the whole story, though, as Jackson has been equally as dangerous on the ground. Thus far, he has rushed 116 times for 781 yards (6.7 yards per carry) and has added another six scores on the ground. In fact, while Mark Ingram has more carries (136), Jackson leads the team in rushing yards. Ingram has 667 yards and eight touchdowns.

Mark Andrews has been Jackson’s most consistent target with 48 catches for 598 yards and six scores. Marquise Brown has the next highest totals with 30 catches for 477 yards and four touchdowns.

After making it to the Super Bowl last year, expectations were high for the Rams this year. Unfortunately, the production on the field has not lived up to expectations. Still, the Rams are a respectable 6-4 and are trying to make a playoff push behind quarterback Jared Goff. On the season, Goff is 225 for 373 with 2,783 yards, 11 touchdowns and 10 interceptions.

Cooper Kupp has been Goff’s most reliable receiver with 61 receptions for 845 yards and five touchdowns. Still, Cooks and Woods are expected to play in this one, which could help open things up a bit for Goff.

On the ground, Todd Gurley has led the way for the Rams on the ground. He has also been a bit inconsistent, though, as through 10 games, he has rushed 129 times for just 525 yards and seven scores. It was encouraging last week, though, as he rushed almost 30 times for over 100 yards. If he can be productive and the wide receivers can stay healthy, this offensive unit still has the ability to be elite.

Taking The Ravens To Cover

As I just mentioned, the Rams certainly can be elite if all things are clicking. The problem, though, is they haven’t clicked for some time now, while the Ravens are absolutely dominating teams. The Rams have the goods to make it a game, but until they can slow the Ravens down, it is hard not to take Baltimore, especially when it is only laying three points. For my money, I am taking Baltimore at -3.