Steelers Without Pouncey For Divisional Tilt vs. Bengals 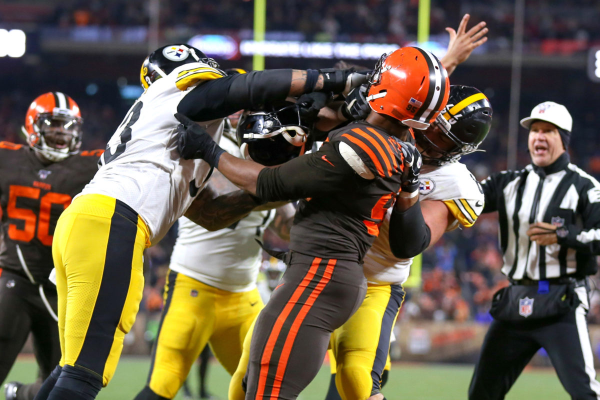 The winless Bengals have only six games remaining to get their first victory of the season. They’ll start that final stretch on Sunday afternoon against the Steelers, who will be without center Maurkice Pouncey.

Pouncey was originally suspended three games for his role in the late-game brawl at the conclusion of the Steelers-Browns Thursday Night Football matchup. Following an appeal heard by appeals officer Derrick Brooks, Pouncey’s suspension was reduced from three games to two, but he’ll still be out for the next two games against Cincinnati and Cleveland.

The $35,096 fine levied against Pouncey for his action was also upheld, which is no surprise considering Pouncey kicked Browns pass rusher Myles Garrett in the head after Garrett struck Steelers quarterback Mason Rudolph with a loose helmet.

While the noise surrounding the Thursday Night Football incident has yet to cease, Pittsburgh needs to focus on an important divisional matchup with the Bengals on Sunday.

The Steelers currently sit at 5-5 and in second place in the AFC North. With 8-2 Baltimore well out in front of the division race, Pittsburgh’s only real chance of reaching the postseason is via a Wild Card spot.

With a win against the Bengals, Pittsburgh would find itself level with the 6-5 Colts, who currently own the seventh spot in the AFC. That would give the Steelers a solid chance at a Wild Card spot going into the final five games of the season.

A loss, however, would push the Steelers to 5-6 and could leave them wallowing in the bottom half of the conference.

Who Has the Edge?

The Steelers will be without a key player in Pouncey when they go into Cincinnati Sunday afternoon, but will that be enough to level the playing field?

Pouncey will certainly be missed when it comes to protecting Rudolph or opening up holes in the running game, but Pittsburgh is more of a defensive team this year, anyway. On the season, Rudolph has completed 62.3 percent of his passes while throwing 12 touchdowns and eight interceptions.

The Bengals look poised to earn the top overall draft pick in 2020 as they’ve yet to record a win this year. Five of Cincinnati’s 10 games have been lost by seven points or fewer. Most recently, the Bengals lost to Oakland by a score of 17-10.

Cincinnati decided to move on from quarterback Andy Dalton two weeks ago. Since then, replacement Ryan Finley has thrown for just 282 yards, one touchdown, and two picks in his two starts.

In the previous matchup between Pittsburgh and Cincinnati this year, the Steelers won a 27-3 contest. Although they’ll be without Pouncey this week, it shouldn’t be enough to erase that 24-point deficit.

On paper, it doesn’t look like the loss of Pouncey will be enough to even this Steelers-Bengals matchup, and the odds agree. Despite going on the road without a key player, the Steelers are seven-point favorites.

If no upset takes place in Cincinnati, the Steelers will improve to 6-5 and give themselves a realistic chance of claiming a Wild Card spot at the season’s end.

But how realistic is that outcome?

With only six playoff spots in either conference, there isn’t much room for error when it comes to reaching postseason football. For the Steelers, that room is tinier than most.

So, while a win against the Bengals this week is likely, a trip to the postseason for Pittsburgh isn’t.