Jets Improving Roster, But Do Odds Say They Have A Chance At The Super Bowl? 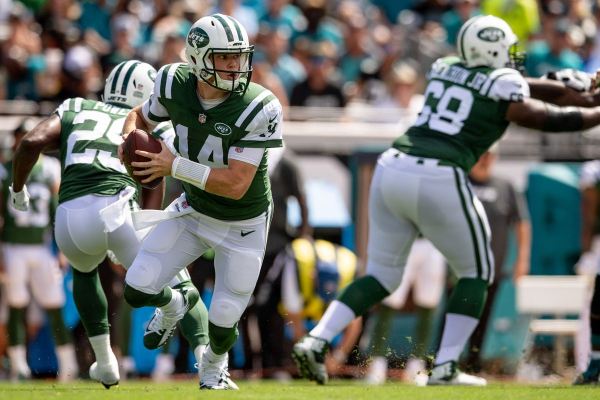 The New York Jets have the No. 3 waiver priority based on last year’s record. On Monday, the club used it to acquire guard Alex Lewis from the Baltimore Ravens in exchange for a conditional seventh-round pick in the 2020 draft.

Although Lewis is likely to play a backup role for New York, he’s a welcome addition to an offensive line unit that needs more depth. Lewis is due to make $2 million this season in the final year of his deal.

As a starter in 10 games for the Ravens last year, Lewis has game experience at left guard. The 2016 fourth-round pick has shown good ability while on the field, but he’s also missed 28 games in three years due to injury.

The Jets are obviously focusing on the offensive line right now. In addition to trading for Lewis, the front office also managed to bring former Pro Bowl center Ryan Kalil out of retirement.

While the team is certainly improving, how close are they to becoming a true contender?

While the Jets are rising in the ranking predictions within the AFC East, let’s not forget about the team’s 4-12 record under Todd Bowles last year. New York finished dead last in the division and were never in the playoff discussion.

Coming into this year, the Jets need to get better on both sides of the ball. Offensively, the club ranked 23rd in 2018 after scoring 333 points. Defensively, the Jets were ranked 29th after allowing 441 points.

The biggest factor in how large a leap forward the Jets can make will be the evolution of quarterback Sam Darnold in his second year. Darnold’s rookie campaign of 13 games included 17 touchdowns, 15 interceptions, and a completion percentage of 57.7 percent. All of those numbers will need to improve if New York will make a playoff push.

The Jets are doing what they can to help Darnold get better. First, they’re shoring up an offensive line that allowed Darnold to be sacked 30 times. Second, the addition of Le’ Veon Bell should help take some pressure off the young quarterback by introducing a capable run threat for defenses to worry about.

New York will also want to improve at the receiver position. Last year, the team didn’t have a single pass-catcher go for 800 yards receiving, and only Robby Anderson and TE Chris Herndon managed to score more than two TDs.

Look for slot receiver Jamison Crowder to add plenty of production in this area, especially under an Adam Gase offense that likes using the slot position.

Do the Odds Favor a Jets Super Bowl Run?

With the likes of New England and Kansas City as AFC competition, any team will be facing tough odds to make it to a Super Bowl. For the Jets specifically, it appears to remain a longshot.

Although oddsmakers expect the Jets to make progress in 2019, the over/under on their win total for the upcoming season is set at just 7.5. New York would likely have to exceed that number significantly to make the playoffs.

As you’d expect, the Super Bowl odds paint an even uglier picture for the Jets. New England and Kansas City are the two favorites once again with +700 and +800 odds, respectively. In this category, you’ll have to look beyond Washington (+6600) and Tampa Bay (+6600) before finding the Jets and their +7000 odds to take home the Lombardi Trophy.

The Jets are clearly improving their roster, but the odds don’t give them much of a chance to win the Super Bowl this year.