No Suspension for Tyreek Hill; Should You Consider Chiefs on a Future Bet? 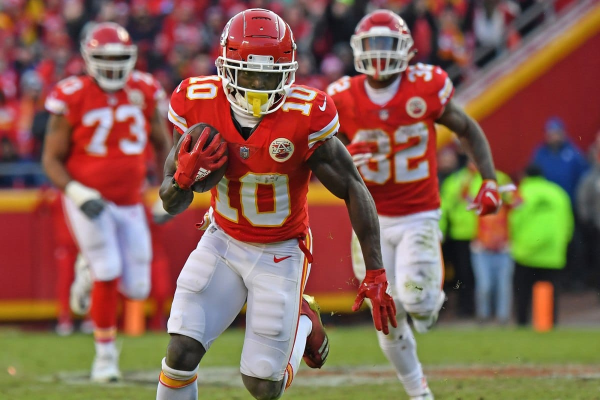 Following a prolonged investigation into allegations of child abuse by Chiefs receiver Tyreek Hill, the NFL said in a statement Friday they will not be suspending Hill after being unable to determine whether Hill violated the personal conduct policy.

Here’s the official statement from the NFL: “Based on the evidence presently available, the NFL cannot conclude that Mr. Hill violated the Personal Conduct Policy.”

The same statement went on to say that Hill, 25, is now able to “attend Kansas City’s training camp and participate in all club activities.”

The Chiefs have responded by saying they’ll continue to monitor any new developments in the case, but there’s no denying the team and quarterback Patrick Mahomes will be happy to welcome back the production of Hill.

With 17 yards per reception, Hill hauled in 87 passes for 1,479 yards and 12 touchdowns in 2018, making him one of the most dangerous players in the league.

So, after the somewhat surprising decision not to suspend Hill, one major question remains: Are the Chiefs a good future bet?

Are the Chiefs Offering Good Value?

Before the Hill decision, Kansas City was holding the third-best odds to lift the Lombardi Trophy this season. Now, most books have the Chiefs at +800 odds to win Super Bowl LIV and +375 to win the AFC.

After parting ways with RB Kareem Hunt last season due to off-the-field issues and facing the same possibility with Hill just days ago, it’s easy to understand why so many oddsmakers moved the Chiefs down a notch or two. That sort of uncertainty certainly has the potential to take the wind out of the sails of any offense.

But with Hill now remaining with the team, Kansas City still has the core that made them so explosive as an offense a year ago. MVP Patrick Mahomes will follow up his 50-TD, 12-INT season in which he completed 66 percent of his passes for 5,097 yards.

Returning for his seventh season in charge of the Chiefs will be Andy Reid, widely regarded as one of the best offensive coaches in football. And now Mahomes is set to have a full slate of weapons at his disposal, with Hill, WR Sammy Watkins, and TE Travis Kelce all available.

However, while Kansas City looks poised to build on last year’s 12-win season, bettors should be careful of future developments with the investigation into Hill, which is ongoing. Should Hill get into any more trouble or more evidence come to light, both the NFL and the Chiefs have both said they could pull Hill from the playing field. And as we saw with Hunt, the Chiefs have proven that just about every player, no matter how productive, can find himself in a new uniform very quickly.

With all of that being said, the tightening odds on Kansas City to win the AFC and Super Bowl don’t offer great value when you consider the Chiefs will have to get by the likes of New England and the rising LA Chargers to win either.

If you’re looking to put money on a favorite, Kansas City certainly looks ready to continue its offensive dominance, but you may also want to consider the more likely outcome of the Chiefs hitting the Over on the 10.5-win total line.

After finishing 2018 with 12 wins, the Chiefs now have the vast majority of their weapons back and another year under Reid. And although Kansas City will have to face the Patriots once and the Chargers twice, right now it would be difficult to see the Chiefs going into any other contest as the underdog. Plus, the away fixture in the Chiefs-Chargers divisional series will be played in Mexico City, taking away LA’s home-field advantage.

With the line on Kansas City hitting the Over ranging from -105 to -120, that looks like the more surefire bet.