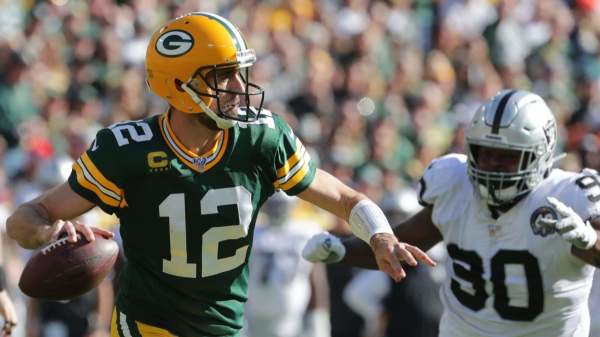 With less than two minutes to play in the first half of a 14-10 contest between the Oakland Raiders and Green Bay Packers on Sunday, Derek Carr took a snap from the Green Bay two-yard line with every intention of giving his team the lead. But as Carr stuck out the football towards the end zone, a fumble turned touchback handed the football over to Aaron Rodgers, who promptly led the Packers down the field to score, and they never looked back.

While there were many other important plays, the 14-point swing going into the half felt like the defining moment for a Raiders team that can’t quite break into the upper echelon of the NFL. In the end, Green Bay defeated Oakland by a score of 42-24 on the back of six total touchdowns for Rodgers.

Earning a perfect passer rating of 158.3 in the game, Rodgers went 25 of 31 for 429 yards with five touchdowns and no interceptions. Just in case that wasn’t going to be enough, he also added a rushing touchdown, as the Pack scored on six of their eight possessions.

With the victory, the Packers moved to 6-1 on the season and remain above the 5-2 Vikings in the NFC North. Now, as we near the halfway point of the NFL season, is Green Bay making the case that it’s the team to beat in the NFC?

While the AFC appears to have a clear favorite in the form of the New England Patriots, the NFC is much more convoluted, with a host of quality teams aiming to prove themselves as the top team in the conference.

At the moment, Green Bay has a strong claim as the NFC’s best team by leading perhaps the toughest division in football with a record of 6-1. Behind the Packers, Minnesota is undefeated at home and has a top defense alongside an offense full of weapons, including Dalvin Cook, Adam Thielen, and Stefon Diggs.

The NFC South looks like the most clear-cut division in the NFC, as the Saints have earned a dominant 6-1 record with Drew Brees sidelined. With wins over the Seahawks and Cowboys, New Orleans figures to compete for the conference’s top seed.

The NFC West features three teams with playoff aspirations, especially after Los Angeles acquired All-Pro cornerback Jalen Ramsey. The undefeated 49ers sit atop the division with a record of 6-0, but the 5-2 Seahawks have an MVP candidate at QB in Russell Wilson, and the 4-3 Rams are the defending NFC Champs.

The NFC East appears like it will come down to the Cowboys and Eagles, and Sunday night’s 37-10 victory for Dallas against Philly puts the 4-3 Cowboys in control. While there’s plenty of season left, nobody will be too scared of the NFC East representative right now.

With approximately eight teams competing for six playoff spots, a strong NFC can only have one winner. So, who’s the team to beat right now?

Top Dog in the NFC

Although the Patriots own the best odds to win the Super Bowl at +250, the next three teams all reside in the NFC. In fact, eight of the 10 best odds of winning the Lombardi Trophy all belong to NFC teams.

The NFC appears to be a three-team race right now, with New Orleans pulling ahead of the pack with its +363 odds of winning the Super Bowl. Directly behind the Saints are the Packers (+633), followed closely by the 49ers (+676).

So, while the Packers are one of three teams to beat in the NFC, it looks like they’ll have to chase down the Saints if they want the best odds in the conference.