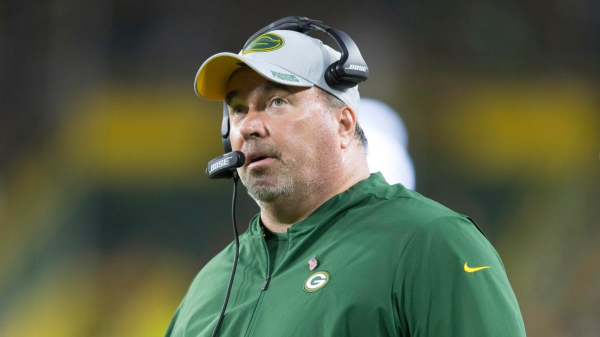 Mike McCarthy went into Cowboys owner Jerry Jones’ house as a candidate to replace Jason Garrett on Saturday night and left on Sunday with an agreement to become the ninth head coach in Dallas history.

According to reports, the former Packers head coach and Cowboys ownership have reached a five-year deal.

Dallas ownership and head coach Jason Garrett had been in limbo before McCarthy’s hiring, as the team had begun the interview process without having let Garrett go. In the end, Garrett, whose contract was set to expire on Jan. 12, will not be a part of the Cowboys organization moving forward.

The change in leadership comes following a disappointing 8-8 season in which Dallas missed out on the playoffs despite a roster full of talent. No NFC East title or postseason football was the final straw for Garrett, who compiled a record of 85-67 in his nine-plus years in charge.

McCarthy, who hasn’t coached since being fired from Green Bay 12 games into the 2018 season, is expected to bring in Saints linebackers coach Mike Nolan as defensive coordinator. McCarthy served as Nolan’s offensive coordinator when Nolan was the head coach of the 49ers in 2005.

The Jones family now hopes McCarthy can lead the Cowboys where he led the Packers in AT&T Stadium in 2011: a Super Bowl Championship.

While McCarthy wasn’t the sexiest hire for many Cowboys fans, he might be the best one.

Sure, a name like Oklahoma coach Lincoln Riley or former Florida and Ohio State coach Urban Meyer would have made a bigger splash, but McCarthy brings with him exactly what Jones was looking for – NFL head coaching experience and a history of success.

That’s the reason Jones only brought in two candidates for interviews – McCarthy and former Bengals head coach Marvin Lewis – and why he was so quick to pull the trigger on the man who delivered the Lombardi Trophy to Green Bay.

The biggest stigma attached to McCarthy is how things ended with the Packers. Although he did an impressive amount of winning, McCarthy is remembered by most as the guy who frustrated Aaron Rodgers and, in the view of some, held back one of the league’s best QBs.

What’s forgotten behind that veil of disappointment is the fact that McCarthy earned a record of 125-77-2 while reaching the postseason in nine of his 13 years as the head coach in Green Bay. McCarthy also reached the NFC Championship Game twice in addition to his Super Bowl season.

And while the ending with Rodgers was ugly, McCarthy certainly deserves credit for the development of the future Hall of Fame quarterback.

McCarthy Was Not The Favorite To Land Cowboys Job

While McCarthy certainly fit everything Jones and Cowboys were looking for in a head coach, he wasn’t the favorite to become the next man in charge of Dallas leading up to his hiring.

Instead, Jones was expected to dip into the college game to find his next man, as Oklahoma coach Lincoln Riley held even odds to become the next coach of the Cowboys. Riley had been linked to a potential vacancy in Dallas for much of the season, but Jones was unwilling to roll the dice.

While McCarthy wasn’t the favorite in this particular job search, he was far from a longshot. Before agreeing to terms with Jones, McCarthy was a part of a trio of names with odds of +700 to be hired in Dallas.

With McCarthy and Nolan now set to take over in the major coaching roles, Jones and the Cowboys ownership will now shift focus to the potential deals for quarterback Dak Prescott and receiver Amari Cooper, among others.

If a long-term deal isn’t reached between Prescott and the Cowboys, Dallas can choose to franchise the QB to keep him around for another year.

With a loaded roster and a team that finished first in total offense (431.5 yards per game) and ninth in total defense (327 yards allowed per game) in 2019, Jones will expect McCarthy to make his team a contender in 2020.