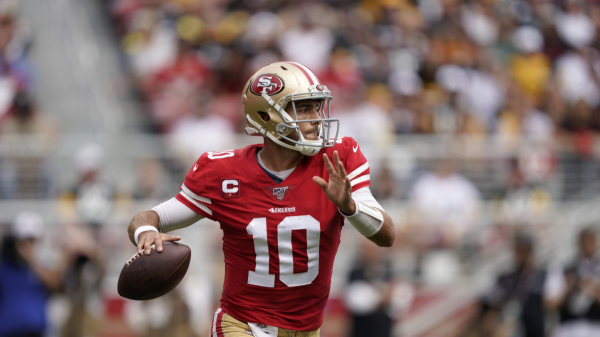 Monday Night Football will feature a matchup of the AFC North’s Cleveland Browns (2-2) against the NFC West’s San Francisco 49ers (3-0). Despite frustrating seasons last year, both of these teams have certainly shown that they are on the way up, and technically, both teams led their respective divisions (Browns hold the tiebreaker with the Ravens) coming into Week 5.

Both the Browns and the 49ers will look to keep it rolling Monday night. Kickoff for this one is scheduled for 8:15 pm ET.

The Browns have had a bit of inconsistency to their season as they have had two really nice wins against the Jets (23-3) and the Ravens (40-25) but have also lost big to the Titans (43-13) and lost to the Rams (20-13). Despite that, they certainly have shown that they are a much-improved team and will look to knock off the undefeated 49ers at their place.

The 49ers had the earliest bye week on the schedule as they enjoyed Week 4 off and will come into this one rested and ready to go at home. In their first three games, they have beaten the Buccaneers (31-17), Bengals (41-17) and the Steelers (24-20). They will look to keep rolling in Week 5 on Monday.

The San Francisco 49ers come into this as four-point favorites playing at home. The over/under for points scored is set at 47.

On the defensive side, it is once again the 49ers who hold the advantage. They currently rank eighth in the league, allowing an average of 18 points per game (20 at home), while the Browns rank 14th overall, allowing 22.8 points per game (14 on the road).

Browns Hope To Build Off Of Big Game

Cleveland no longer is the team that fears going winless throughout a whole season, but now they are trying to prove that they belong in the postseason conversation. Leading the Browns under center is quarterback Baker Mayfield. On the season, Mayfield is 82 for 139 with 1,147 yards passing, four touchdowns and six interceptions. While those numbers aren’t impressive, he has shown he is capable when he has time in the pocket. Thus far, he has been sacked 12 times, but last week, when he was only sacked once, he went 20 for 30 for 342 yards and a touchdown.

His leading receiver to this point has been Odell Beckham Jr., who has 21 receptions for 308 yards and a touchdown. Last week, Jarvis Landry had a big day and on the season has 18 receptions for 328 yards, but also had to leave the game early with a concussion.

On the ground, the Browns are led by Nick Chubb. He has rushed 78 times this season for 398 yards and four touchdowns.

The San Francisco 49ers have been dominant through the early part of the season and look to continue that in Week 5. They are led under center by quarterback Jimmy Garoppolo. Thus far, he is 58 for 84 for 739 yards, five touchdowns and four interceptions. To the offensive line’s credit, he has only been sacked twice thus far this season, though they will certainly be tested by Garrett. Garoppolo’s favorite target has been tight end George Kittle. On the season, Kittle has 17 receptions for 165 yards.

On the ground, the stat leader for rushing is Matt Breida, who has 41 carries for 226 yards, but quietly Raheem Mostert has outperformed him. Mostert has 34 carries for 202 yards but is averaging more yards per carry (5.9 versus 5.5). Regardless, they will look to get it done against a decent defensive front in Cleveland.

On the defensive side, the 49ers are led by Fred Warner (19 tackles), a trio at two sacks (Dee Ford, Arik Armstead and DeForest Buckner) and five players with an interception apiece.

The 49ers have been shockingly dominant this season. Throw in the fact that not only are they at home but are also coming off of a bye week, and this could be a big opportunity for San Francisco to dominate.

Really, I think that this one boils down to the Browns’ offensive line versus the 49ers’ defensive line. If the 49ers can get to Mayfield, it could be a long night for the Browns. If not, the Browns may be able to upset the 49ers on the road. For my money, though, I will take the rested team playing at home and will take the 49ers despite giving up the four points.