Jimmy G and 49ers Win Third Straight; Can They Play Deep Into January? 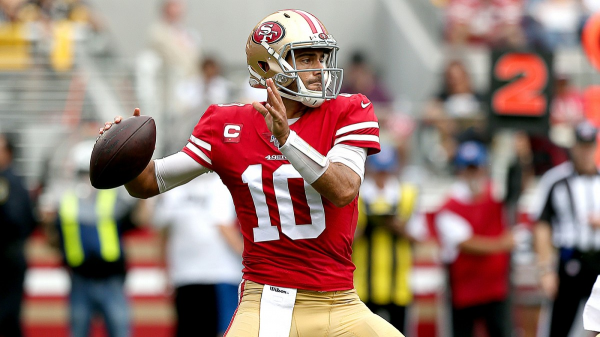 At 3-0 and tied for the NFC West lead, the 49ers are balling, but can they make a run of it come late this season?

Quadruple zeroes on the clock after Mason Rudolph throws an errant duck over the middle of the field, and the San Francisco 49ers secondary erupts in elation. They’re 3-0.

That was the scene late Sunday afternoon after the 49ers pulled off a four-point victory over the Pittsburgh Steelers, who have started winless to begin the NFL season. Two teams drifting in opposite waters, one upstream and positively, and the other, downstream and disastrously.

For the 49ers, such a scene seemed rather alien, unless, of course, you’re a massive 49ers homer. Heck, you’d probably make the argument that Jimmy G is the second coming of Tom Brady.

Yes, Garoppolo is a very good quarterback in his own right, but this game is hardly one to go crazy about if you’re a Niners fan, and objectively speaking, there are a few glaring things that should be noted about the 49ers’ season overall as well as Sunday’s win.

The above sub-heading is a reference to the 49ers on Sunday. Wow, did they get lucky. They coughed the ball up multiple times, at a clip that most other teams would’ve been annihilated on the scoreboard had they done the same, but miraculously, they managed to escape with a victory.

You cannot turn the ball over four times and expect to win most football games. Lucky for the Niners, a timely fumble by the Steelers in their own territory resulted in the go-ahead touchdown to put San Fran up 24-20, and after a failed drive, they were able to seal the deal.

Some might say it’s better to be lucky than good, but when you look at the 49ers, there is no doubt that the victory over the Steelers had a lot of luck involved. Had they played a better team, there is no doubt that those multiple turnovers would’ve killed them. The 49ers are 20th in the league in turnover differential, so while they are by no means the worst, they are in the bottom half of the league in the category.

But check this stat: The 49ers are tied with the Dolphins and Bengals for leading the league in total turnovers with 8. That’s right, a 3-0 team is tied with two 0-3 teams for turnovers. Does that make sense?

When you get to playoff time, you’re not playing bums. You’re playing the league’s best, and so far, the 49ers have played anybody but that. They beat the Buccaneers by two touchdowns, the Bengals in a blowout, and scraped by the Steelers at home. Hardly a world-beater kind of schedule.

For those of you out there that want to get excited about beating some of the league’s worst teams this season, I guess that’s something to write home about, but there is hardly anything impressive about these wins other than the fact that we know the 49ers are a much-improved team. Much-improved, but still a team with a lot of potential.

Ok, let’s not completely disrespect the Niners here. Sure, they are having a really great start, and hey, good for them. But here’s the thing: they haven’t been tested yet. Against the likes of the Rams and Seahawks, we don’t know how this 49ers team is going to perform. Against the Rams — no, they’re not ready for that. Against the Seahawks, the same Seahawks that just got smoked at home against the Brees-less Saints? Ok, maybe you have a case.

The 49ers are one heck of a football team this year, but rather than being immensely gifted, I think it’s more a product of their schedule early in the season, and a little bit of luck. Let’s revisit these takes in about four months and see how off I am. But expect the 49ers to come back to earth once some real tough opponents pour in.