Big Ben Injured As Steelers Fall To 0-2; Will They Make the Postseason? 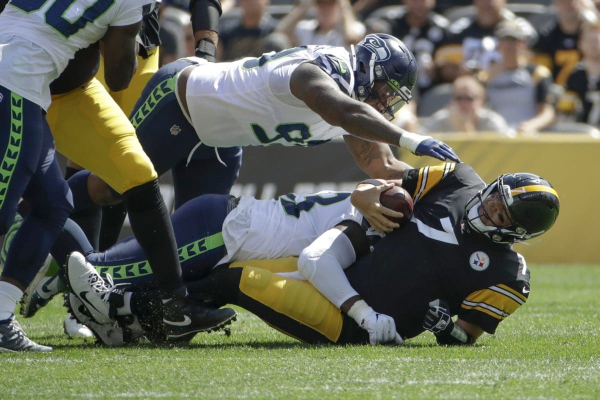 Can Pittsburgh make it to the postseason without its franchise quarterback?

This is not the season that Steelers fans were hoping for. Your star QB gets banged up, you lose in epic fashion to your arch-nemesis to open the season, and now, one of the league’s more upstart franchises comes into your house and drops a demoralizing bomb of a win on top of your head. SO what’s the deal now? How do you recover from this? Do you even recover from this? Let’s find out.

Some people may not see it this way, but Mason Rudolph was a heck of a player at Oklahoma State. While many Steelers fans may not be aware, Rudolph is no Landry Jones, no disrespect to Landry Jones. Rudolph has proven at both levels that he has a cannon for an arm, throws an accurate ball, and is an all-around solid athlete.

Frankly, at this stage in their careers, Rudolph is a far more dynamic player than Big Ben, who, although he has a lot more experience and credibility under his belt, is towards the end of his days and is way past his prime.

If anything, the injury to Big Ben is a great chance for Rudolph to get a lot of reps and get better. This is is ultimately the trajectory of this team as those who continue to deny reality in Pittsburgh will undoubtedly continue to pretend Big Ben isn’t over the hill and doesn’t need to be replaced at this point, but hey, carry on delusional Big Ben fans.

When it comes to football — not just the NFL — people love to overreact to what they immediately saw the week prior. The fact is, your memory can be your biggest enemy in football, and while we shouldn’t overreact to this kind of loss, it should be noted that it is largely dependent on the other teams in the division.

Baltimore is starting solid, whereas everyone else in the division is presently winless with two losses, save for the Cleveland Browns, who were favored to win the division and will largely have a performance that is dependent upon their showing on Monday night.

So plain and simple: What is the deal with the AFC North? The deal is this: This division is not very good, and until some AFC North matchups start happening, it’s going to be very hard to call it for sure, as far as who is going to win the division. But out of every team, the Steelers certainly appear to be neck-and-neck with the Bengals for bottom dwellers of the AFC North.

They Make It: So What?

Who cares about making the playoffs if your chances of winning aren’t that great to begin with? Against one of the top teams in the NFC, the Steelers looked flatout lost. Against the Patriots, whom they’d play in a probable AFC Championship Game were it to happen, the Steelers were utterly trounced.

Steelers fans should, frankly, blow things up and try and start a brand-new era. Until that happens, there is going to be no doubt that they have a ways to go before they are competitive again in the AFC as a whole, let alone the AFC North.

Rudolph is a dynamic QB, and while Big Ben is great, he’s just not the Big Ben he used to be. The season-ending injury to Roethlisberger likely pushes the Steelers into that rebuilding stage just a little bit earlier.