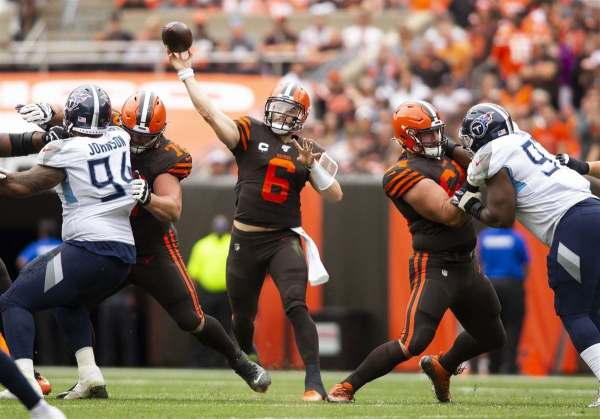 Monday Night Football features a pair of teams who lost in Week 1 but have expectations of improvement this season when the Cleveland Browns (0-1) travel to MetLife Stadium to take on the New York Jets (0-1). While both teams lost in Week 1, the difference-maker in this week’s game could be health as only one team came out of its opener healthy. Kickoff for this one is scheduled for 8:15 pm ET.

For the Cleveland Browns, they lost a very discouraging Week 1 matchup 43-13 to the Tennessee Titans. Nothing seemed to go right for the Browns in this one, but the most concerning thing was the offensive line’s inability to keep Baker Mayfield upright. He was sacked five times in the contest. The Browns also shot themselves in the foot in this one with 18 penalties for over 180 yards, something they will surely expect to be better in Week 2.

For the Jets, they lost in frustrating fashion, 17-16 against the Buffalo Bills at home. More frustrating is the fact that they lost a couple of starters with quarterback Sam Darnold out with mono and Quincy Enunwa out for the season with a neck injury. They hope that Trevor Siemian can step in under center to lead the Jets to a win at home.

The point spread for this one currently sits with the Cleveland Browns being 6.5-point favorites despite playing on the road. The over/under on total points scored is set at 44.

With only one week of games played thus far, there is not enough data to truly get a depiction of where these two teams sit offensively or defensively. Currently, the New York Jets sit 26th in the NFL, as they scored 16 points in their opener. The Browns come in one spot later at 27th, with their 23 points.

Defensively, after one game, the Jets rank ninth in the league after they allowed 17 points to the Bills, while the Browns come in 31st after allowing 43 points. Again, with only one week in the books, these rankings are likely to change after the next few weeks.

Browns Hope To Be More Disciplined

Possibly one of the best indications of how much the Browns struggled with penalties in Week 1 is the fact that they had about 80 more yards in penalties than they did on the ground. As frustrating as that may be, that is a problem that is correctable.

If Baker Mayfield can get time to throw, I certainly anticipate the offense being more successful in Week 2. Against the Titans, Mayfield went 25 for 38 for 285 yards and a touchdown. He did have three interceptions and was sacked five times, both indications that he was likely rushed and felt little comfort in the pocket. If he can find a bit more time, these numbers should improve.

Mayfield’s favorite target in Week 1 was the big offseason acquisition of Odell Beckham Jr. Beckham had seven catches for 71 yards. Jarvis Landry also had a decent day, going for 67 yards on four receptions. On the ground, Nick Chubb led the way with 17 rushes for 75 yards.

Jets Will Need To Rely On Reserves

With Darnold out, it will be the Trevor Siemian show on Monday night for the Jets. The last time that he played in an NFL game, though, was 2017. Then with Denver, he went 5-5 as a starter, throwing for 2,285 yards, 12 touchdowns and 14 interceptions.

He is certainly not going to light it up on the offensive side, but the Jets are hoping that he can be a game manager. He may also have a new target to throw to as the Jets traded for wide receiver Demaryius Thomas, one of his receivers when he started in Denver. While Thomas is far removed from his Pro Bowl days, the Jets hope to catch lightning in a bottle with him.

On the ground, the Jets turned in Week 1 to their big offseason acquisition, Le’ Veon Bell. Last week, Bell rushed 17 times for 60 yards. He also had six receptions for 32 yards and a touchdown. The concern, though, is that he injured his shoulder and that may leave him less than 100 percent if he plays. Still, he will likely be a considerable weapon for the Jets as they will probably try to exploit the ground game.

It is not very often that I pick a team to cover a touchdown spread on the road when the previous week they lost by 30 points, but that is exactly what I am doing with the Browns this week. Darnold is out, Enunwa is out, Bell has a hurt shoulder, and the Jets just seem to be a mess. That’s enough for me to think that Cleveland can get win number one on the season and do it in convincing fashion. The offensive line in Cleveland is still a concern to me, but for my money, I am going with Cleveland -6.5 in this one.