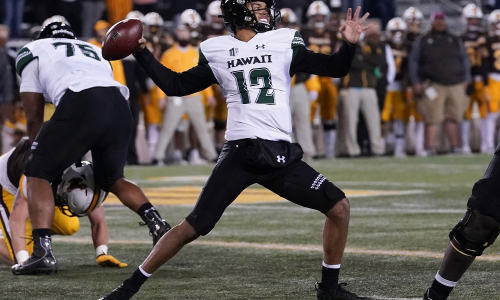 The late slate Saturday will include a Mountain West Conference tilt between New Mexico (0-1) and Hawaii (1-1).

The game kicks off from Aloha Stadium in Halawa, Hawaii at 11 p.m. ET.

Hawaii is limping into this one after a 31-7 loss to Wyoming a week ago. The Rainbow Warriors had a disastrous start to the game, allowing the Cowboys to score in five plays to open the game. Hawaii quarterback Chevan Cordeiro compounded the rough start with a fumble on his second play of the game. He was harassed all day and was sacked five times.

New Mexico is coming off a 38-21 loss to San Jose State. The Lobos hung around after going down 7 in the first quarter. The Spartans kept on the gas to maintain a lead but it was an overall encouraging showing by a New Mexico team that was one of the worst in the conference last season. The Lobos cancelled their first game against Colorado State due to a surge of COVID-19 cases in Bernalillo County.

Hawaii is 18-8 as a favorite since 2015, but the offense hasn’t been what we’ve come accustomed to. The team averaged 6.7 yards per play a season ago and that average has dropped by a full yard. Even the win against Fresno State was below that average. Meanwhile quarterback Cole McDonald only threw for less than 250 yards twice all of last season. Cordeiro has matched that through two games.

New Mexico was the lowest scoring team in the conference last season, averaging just 22.3 ppg while surrendering 37.2 ppg (most in the conference). They were the second worst rushing team but were middle of the pack in stopping the run. The Lobos were also one of the better teams at protecting the quarterback, giving up 18 sacks for -109 yards.

Hawaii has long been known for its passing attack. That hasn’t been the case so far. Instead it’s the defensive side of the ball that has shined. The defense forced four turnovers in an ugly week 1 win over Fresno State. It held the Bulldogs to 19 points – the same Bulldogs that hung 41 on them last year. In the follow-up the defense was left out to dry yet kept the Rainbow Warriors in the game through halftime. Too many short fields were too much to overcome and gusty conditions likely impacted the flow of the game, but it’s still impressive considering 17 of the Cowboys points came off drives starting deep in Hawaii territory.

New Mexico and first-year head coach Danny Gonzales will need to be creative to stay on the field and turn the offense around. In part creativity is a necessity when you don’t have the traditional power running game to grind out 15-20 plays per game.

The Lobos don’t have a running back in the corps that reaches 6 feet. Bryson Carroll will get the most touches but he does most of his work in the passing game. He had eight carries for 8 yards last week. Quarterback Tevaka Tuioti hasn’t been a big factor on the ground but is capable of some chunk plays. Against San Jose State he was 20-35 for 294 yards, 2 tds, 1 int and 69 yards rushing.

Cordeiro’s performance as the signal caller is plenty of cause for concern for Hawaii, but New Mexico still has to prove it can move the ball consistently. The Rainbow Warriors win at home 56.8 percent of the time since 2015 and should add another one here even though +460 is enticing.

Call me skeptical about the margin. The Lobos have covered this spread at a considerably higher rate than Hawaii in the last 5 years (39.6 percent to 23 percent). Hawaii’s average margin of victory at home is just 15.7 points. I have the Lobos covering. Both teams have hit under 61.5 3-of-5 times in their last five games and these offenses are telling us that trend holds.