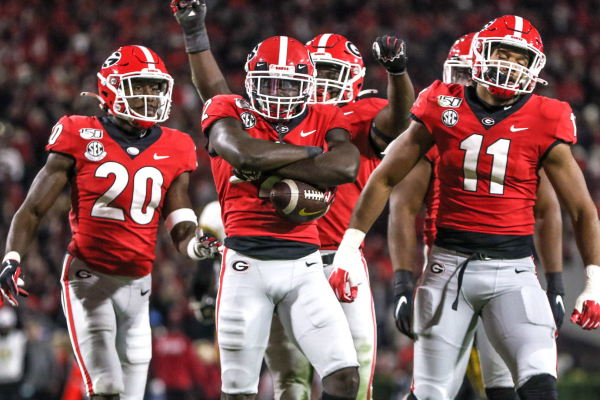 While dropping just two spots after a defeat often feels like mercy in the world of college football, Alabama’s drop from No. 3 to No. 5 feels rather harsh when only the top four teams earn a berth in the College Football Playoff.

Although there’s still enough football left to be played for the current order to change, the most significant choice made by the CFP committee this week was to move No. 4 Georgia ahead of Alabama.

Arguing for Georgia, it makes sense that a team fresh off a loss in which they allowed 46 points should suffer a significant drop in the rankings under normal circumstances.

Yet these aren’t normal circumstances.

With a quarterback returning from injury, the Crimson Tide only lost by five to the second-ranked team in the country. LSU, which has now been moved to No. 1 overall in the rankings, has now beaten Texas, Florida, Auburn, and Alabama, all of whom were top-10 teams at the time, which makes them most worthy of the top overall ranking.

So, while 8-1 Alabama now has as many losses as 8-1 Georgia, how can the committee move the Bulldogs ahead of the Crimson Tide and into a College Football Playoff spot when Alabama’s loss to LSU is much better than Georgia’s loss to South Carolina? The answer, of course, is that the committee is waiting for upcoming games to do its work for it.

As we already mentioned, LSU has the best resume in the country by a wide margin. With four wins over top-10 opponents and a perfect 9-0 record, it’s virtually impossible to argue that the Tigers don’t belong at No. 1.

And, with three games remaining against Ole Miss, Arkansas, and Texas A&M, LSU now looks destined for the SEC Championship Game and a spot in the College Football Playoff.

Ohio State is now ranked No. 2 behind its 8-0 record. Although the Buckeyes have ranked wins over Michigan State and Wisconsin, we’lllearn more about this Ohio State team when it plays Penn State and Michigan to finish the regular season.

Clemson’s scare against North Carolina has kept it from maintaining the top spot, but it also has one of the easiest schedules of any team competing for a College Football Playoff spot. Even with the ACC Championship Game in the near future, the Tigers are unlikely to be tested again in a weak conference.

Now the rankings get very interesting with Georgia coming in at No. 4. By placing the Bulldogs ahead of Alabama right now, the committee appears to be telling Georgia that if it can beat No. 12 Auburn this week and win the SEC title, which would presumably be played against top-ranked LSU, that they’re likely to get into the playoff ahead of Alabama.

If not, the No. 5 Crimson Tide would likely be pushed back into the top four. Assuming no big upsets take place along the way, Alabama would need to beat Auburn in its last game of the season and have Georgia fall in order to find its way back into the CFP.

Rounding out the top eight of the rankings are No. 6 Oregon, No. 7 Utah, and undefeated No. 8 Minnesota.

While LSU, Ohio State, and Clemson have direct paths to the College Football Playoff, the discussion of who will get in between Georgia and Alabama is far more interesting.

As it stands right now, Georgia is sitting on odds of +175 to make the four-team College Football Playoff.

To earn a playoff berth, Alabama is holding odds of +210, which makes Georgia the favorite between the two.