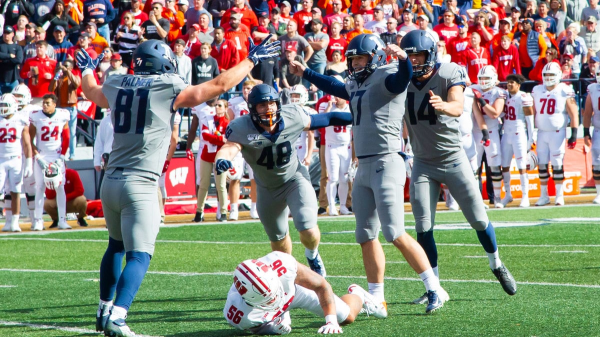 It’s at this stage of the college football season that every conference starts to look at which of its teams has the potential to represent it in the College Football Playoff. For the Big Ten, that short list of potential candidates was cut from three to two as Wisconsin suffered a shocking defeat at the hands of Illinois on Saturday.

Coming into the weekend, Wisconsin was a perfect 6-0, held the No. 6 ranking in the nation, and could boast a Heisman candidate in running back Jonathan Taylor. On the other side of the field, the unranked Fighting Illini were 3-3, with an 0-3 conference record.

All of the above is why the Badgers entered the contest as 31-point favorites and looked destined to remain unscathed until a showdown with No. 3 Ohio State next weekend.

Instead, Wisconsin gave up a 23-14 lead midway through the fourth quarter with a fumble by Taylor and an interception by quarterback Jack Coan with just 2:32 left to play. Illinois turned the latter turnover into a game-winning field goal, and now the Big Ten’s unbeatens have been subtracted by one.

The Big Ten Conference now hangs its playoff hopes on No. 3 Ohio State and No. 6 Penn State, who have a Nov. 23 collision on the horizon.

With an overall record of 7-0 and a conference record of 4-0, the Buckeyes of Ohio State appear to be the strongest team in the Big Ten. Thus far, the Buckeyes have dominant wins over Michigan State and Nebraska and have scored as many as 76 in a game against Miami of Ohio.

At quarterback, Justin Fields is lighting up college football. With a .707 completion percentage, Fields has thrown for 1,492 yards with 22 touchdowns and only a single interception. On the ground, Fields has added another 291 yards and eight touchdowns.

Running back J.K. Dobbins is nearing the 1,000-yard mark, currently sitting on 947 yards with seven touchdowns. Dobbins’ rushing yardage places him fourth in the nation among all running backs.

With 527 yards per game, Ohio State has the fifth-ranked offense in the country, which is led by the third-ranked rushing attack that racks up 287 yards per game.

Defensively, the Buckeyes are second among all Division I teams, allowing just 229 yards per game to opponents.

The Nittany Lions of Penn State can also boast a 7-0 record with a 4-0 mark in the conference. Penn State is in the thick of its schedule now, with games against Michigan State and No. 17 Minnesota upcoming, but they’ve already taken care of Iowa and Michigan over the past two weeks.

The Nittany Lions are led by quarterback Sean Clifford, who’s thrown for 1,742 yards, 16 touchdowns, and two interceptions. Clifford is also the team’s second-leading rusher with 269 yards and three TDs.

While Penn State doesn’t have a running back who can rival the production of Dobbins, the Nittany Lions have a very productive receiver in KJ Hamler. On 32 catches, Hamler has racked up 563 yards and seven touchdowns.

By allowing only 282 yards per game, the Penn State defense is currently 12th in the nation. And with 40 points per game, Penn State is ranked 10th in scoring offense.

So, with that late-season clash only a few weeks away, which team has the best chance to represent the Big Ten in the College Football Playoff?

At the start of the season, the Big Ten was projected to come down to the conference’s two biggest teams: Ohio State and Michigan. While the Buckeyes held +150 odds and the Wolverines held +180 odds to win the Big Ten, Penn State was third with +1,000 odds.

Now, with Michigan out of focus, it’s come down to Ohio State and Penn State.

However, teams like the Buckeyes and Nittany Lions don’t just go into a new season with aspirations of winning the Big Ten and going home. The prize for any great team is winning the College Football Playoff, and both of these teams have a shot.

Although the falloff is drastic from fifth to sixth and sixth to seventh, the Nittany Lions have the seventh-best odds of +2800 to win the College Football Playoff.

With the Nov. 23 matchup between Ohio State and Penn State sure to have a big impact on these odds, let’s keep an eye on the Big Ten as we enter the latter parts of the season.