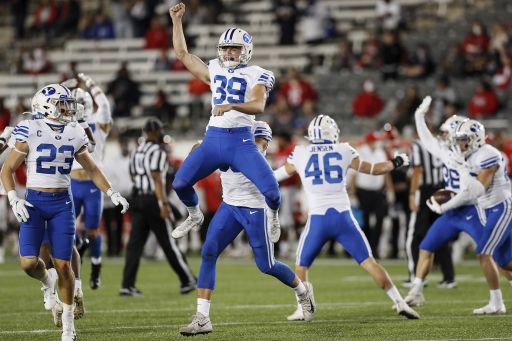 The BYU Cougars are set to take on the Boise State Broncos on November 6, in what is sure to be an entertaining spectacle for fans from both sides. Ahead of the game’s 7:00 pm kickoff, here’s an overview of both teams’ seasons going in, betting picks and odds, and predictions on the result.

In Week 9, the most recent games for both teams, the Cougars (No.9 in the standings) dominated their opponents, managing a 31-point victory in a game against Western Kentucky where they looked purposeful and surefooted in attack and defense. They go into Friday’s game with a 7-0 record, placing them on top of the FBS Independents conference.

The Broncos, at the same time, went off with a 19-point away victory against the Falcons. Quarterback Jack Sears, the Broncos’ focal point in the game, passed for three touchdowns and 280 yards with impressive efficiency (needing just 20 attempts). He was also directly involved in the offensive end product, rushing for 36 yards and a touchdown. All in all, they go into the game with a 2-0 record in the Mountain West Conference over a season where they have, so far, played an equal amount of home and away games.

Odds are already up on the usual sportsbooks and with the current outlook of things, the visiting team, BYU, has a slight odds advantage over their opponents, with DraftKings hosting money line odds of -139 for BYU and +112 for Boise State to win the game. Albertsons Stadium in Boise, Idaho will host the game.

Stats Ahead of The Game

First thing’s first, judging both teams’ seasons against each other is somewhat of a tricky proposition since Boise State has only played two conference games this season, as opposed to BYU’s seven. However, we can paint a picture of both teams’ general form, strengths, weaknesses, and things to look out for on gameday.

In their past five games, BYU has emerged victorious. Their largest margin came in a home victory against Texas State on October 25, winning 52-14. This consistent habit of wiping the floor with their opponents in convincing fashion so far this season, no doubt, plays into their position as odds favorite.

BYU’s points-per-game average stands at 44.4 but more importantly, the points allowed per game stand at 13.4. Zack Wilson, the Cougars’ star quarterback and attacking fulcrum, already has 2152 passing yards for the 2020 season – the highest on the team. His 19 touchdowns also place him 3rd in the FBS Independents Conference in that regard. His team might be the bookies’ favorites to win, but he will have to show up in the game and link up the attacking play to secure victory.

In a season that has been marked by sparkling attacking play, BYU’s defense has, perhaps, been even better. Their defense has let little get by this season and is ranked eighth nationally in scoring defense. Khyiris Tonga personifies the mentality of the squad’s defensive line. After returning to college football from the NFL ahead of the season, he looks to have elevated everyone around him on that defensive line with his high production and sound leadership. He has brought a great deal of experience with him, no doubt.

Boise State, who are made slight underdogs by the oddsmakers (with +2.5 on the points spread), are enjoying a good vein of form having won their last two games. At 45.5, they actually have a better points-per-game record than their opponents. However, it is the defensive side of things that seems to let them down. They have allowed an average of 21.5 points per game over this season, placing them in the middle of the pack in terms of the league ranking. Sure, they have managed a 4-1 record over their last five games, nevertheless, conceding more than 20 points in three of those five games – one of which came in a 38-7 loss to the Washington Huskies – does not bode well for the team.

With BYU coming into town to play at their home ground, Boise State should have that extra pep in their step. However, I’m going to concur with the oddsmakers in predicting a victory for BYU. Of course, the Broncos aren’t going to sit by and make it an easy task for the Cougars, but I think BYU’s solidity in the attack will overpower the opposing defense especially in the latter stages of the game.

On betting picks, the total score pick of over 59.5 at -114 is the safest best in my opinion. Both teams are flying on offense and if they decide to trade blows, the tally could easily surpass that mark.