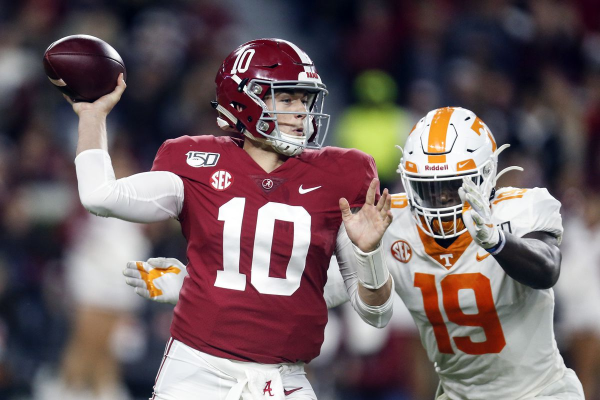 The annual meeting between Alabama and Tennessee, known as the Third Saturday in October, will be contested this weekend for the 103rd time.

Alabama has won the last 13 meetings, dominating this matchup.

As usual, Alabama comes in as one of the top teams in the nation. The No. 2 Crimson Tide are behind only Clemson in the rankings. The first year after the Tua Tagovailoa era has been a good one so far, with Alabama piling up a 4-0 record against SEC foes.

Tennessee entered the season on a six-game winning streak and added to that with wins over South Carolina and Missouri in the first two weeks. The Vols have dropped their last two games to Georgia and Kentucky though.

Kickoff is set for 2:30 p.m. ET Saturday at Neyland Stadium in Knoxville, Tenn.

Tennessee is coming off a disastrous performance against Kentucky. The Vols turned it over on four consecutive drives in the first half, including two interceptions that were returned for touchdowns, en route to a 34-7 loss as 6.5-point favorites. The loss snapped Tennessee’s streak of 17 consecutive straight-up home wins over the Wildcats.

Alabama, on the other hand, stiffened up its previously porous defense to shutout No. 3-ranked Georgia in the second half of a 41-24 victory.

There was a significant difference in the moneyline, too. FanDuel listed Alabama at -1300 while DraftKings had Alabama at -3335. The buyback for Tennessee was +730 at FanDuel and +800 at DraftKings.

Alabama’s streak of straight-up wins is just part of the story in this rivalry. The Tide have dominated against the spread, too. They are 11-4-1 in the last 16 meetings overall and 8-1 ATS in their last nine meetings at Tennessee. Another trend in Alabama’s favor is that the road team is also 4-1 ATS in the last five meetings.

Alabama has a handful of strong trends that favor the over, and Tennessee has some that favor the under. In this series, however, the over has been strong – hitting in each of the last five meetings in Tennessee and six times in the last eight meetings overall.

Two weeks ago, Tennessee was one of the hottest teams in the nation, dating back to last season. The Vols had won eight in a row entering their meeting with Georgia, and even grabbed a halftime lead in that one. The second half against the Bulldogs and both halves against Kentucky last week, however, were horrific.

All of that momentum is gone, and Tennessee has no idea who is going to play quarterback this week. Senior Jarrett Guarantano was the starter through the first four weeks, but his inconsistency reared its ugly head with two pick-sixes in a miserable performance against Kentucky.

Alabama’s defense can be got this season, but how can Tennessee’s offense be trusted right now? The three other quarterbacks the Vols could call on have minimal experience, and asking them to succeed in such a huge spot is too much to ask. The Vols have shown some grit under coach Jeremy Pruitt, but it takes way more than grit to compete against Alabama.

Pruitt, who grew up in Alabama and used to coach for the Crimson Tide under Nick Saban, said Wednesday that this year’s Alabama offense may be the best he’s ever seen. He gave effusive praise to Alabama QB Mac Jones, who has a sturdy offensive line and great skill position players to deliver the ball to.

This is a game between two teams going in opposite directions. Alabama is riding high after shutting out Georgia in the second half and easily covering the closing spread.

It might not be the best idea to jump on Alabama at more than -21 because the backdoor is always open when the line is that high. In fact, Alabama bettors experienced that the hard way against Missouri in the season opener.

The better bet might be Alabama in the first half. At FanDuel, that line is -11.5.

Alabama is averaging 48.5 points per game, and it’s difficult to imagine that high scoring rate not continuing on Saturday. Enter your content here