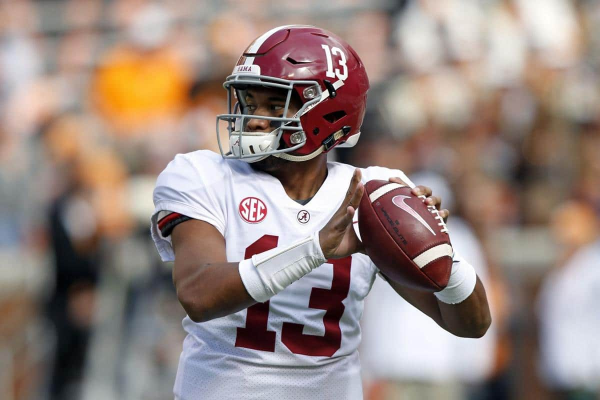 The Alabama Crimson Tide cruised to the National Championship Game a season ago, but things ended poorly in that game. Alabama suffered a massive 44-16 defeat at the hands of Clemson in the title game, and they looked overmatched. Head coach Nick Saban is not used to losing any games at all, but especially not by 28 points. There is no doubt that the Crimson Tide will be on a revenge tour all season long in 2019, and that isn’t a good thing for the rest of the teams in the SEC.

Alabama rolled to a perfect 14-0 record until the National Championship Game, and they have a shot to go undefeated again this season. The Crimson Tide once again will have to replace a slew of players who have moved on to the NFL, but nobody reloads like Alabama.

Quarterback Jalen Hurts left the Alabama team this spring and has enrolled at the University of Oklahoma. The departure of Hurts leaves the Crimson Tide without a real backup quarterback on the roster. Steve Sarkisian is back with the Crimson Tide as an offensive coordinator, and he was great with Alabama during his first stint.

Tua Tagovailoa: There might not be a better player in college football than Tua Tagovailoa, and he will need to remain healthy if Alabama is going to win the SEC again. Tagovailoa threw for 43 touchdowns to just six interceptions a season ago, completing 69 percent of his passes. Alabama’s offense was one of the most explosive in the country a season ago, and it has the potential to be great again.

Dylan Moses Jr.: Defense is always a top priority for Nick Saban’s team, but there are some question marks heading into the 2019 season. Dylan Moses Jr. is the best defensive player returning and has a chance to play himself into a top draft pick next season. Moses led the team with 96 tackles a season ago, and also registered 3.5 sacks.

The Crimson Tide come into the 2019 season with a huge chip on their shoulders, and that should scare the rest of the country. Alabama rolled through the 2018 season before getting waxed in the National Championship Game. Nick Saban will use that as motivation all season long, and the Crimson Tide are going to cruise to another perfect regular season. Bet the over on 11.0 wins for the Alabama Crimson Tide team in 2019. Alabama will also be the team to beat once again in the SEC, and they are the favorites. Take Alabama -160 over the rest of the teams in the SEC to win the conference championship. The Crimson Tide appear to be on a collision course to meet up with Clemson again in the title game, and this time Alabama will prevail. Bet the Alabama Crimson Tide +225 to win the College Football Playoffs.