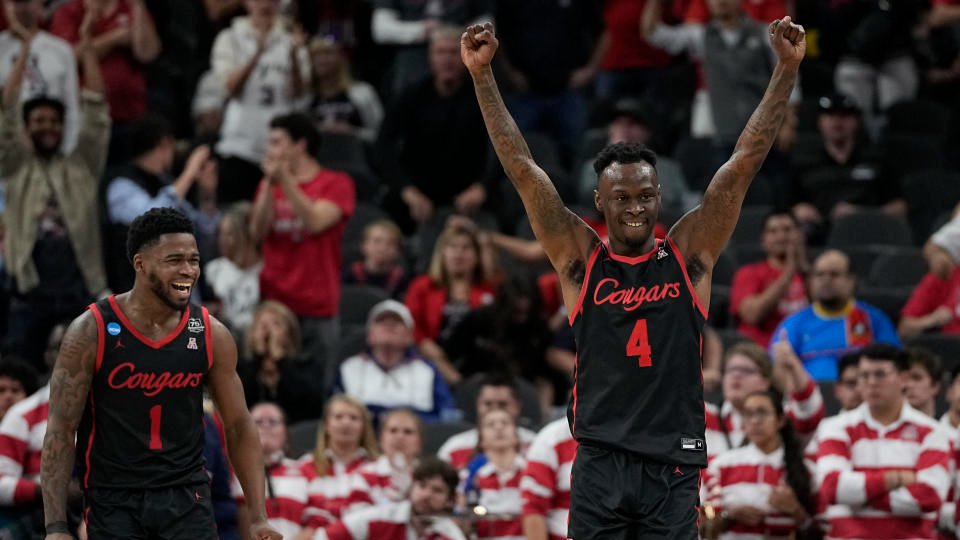 An illustrious record is on the line when South Region #5 seed Houston meets #2 seed Villanova in San Antonio with a place in the Final Four on the line.

Today’s South Region final against the Wildcats will be the seventh regional final appearance for the Cougars. The previous six times they have reached this round of the NCAA Tournament, they have won every single time.

To maintain that perfect record, the Cougars will have to end Villanova’s recent regional final streak. The Wildcats have won their last three regional finals (2009, 2016, and 2018), going on to win the national championship in 2016 and 2018.

The winner of the Houston vs. Villanova matchup will face the winner of the Midwest Region final between Kansas and Miami (FL) next Saturday in the Final Four. Who will move on to New Orleans, and whose season will end in San Antonio?

Can the Cougars Continue Their Defensive Dominance?

Houston’s success under Kelvin Sampson has been built on strong defense. In each of the six seasons, the Cougars have allowed under 65 points per game.

The past two seasons, that number has dipped below 60 points per game, as the Cougars have won 60 games and made consecutive deep runs in the NCAA Tournament. Last season, they finished second in Division I in scoring defense, allowing only 58.2 PPG as they reached the Final Four for the first time since 1984.

This season, despite losing Marcus Sasser and Tramon Mark in December, Houston is third in scoring defense, allowing only 59.0 PPG. So, that technically makes their Sweet 16 performance a subpar one, as they gave up 60 points to the Wildcats.

However, it was anything but subpar, as the Cougars held Arizona two dozen points below their season average in claiming a 72-60 win.

The Wildcats entered the game shooting over 49 percent from the field, but they shot just 33.3 percent (18 of 54) from the field and 31.8 percent from three against Houston. And Arizona star Bennedict Mathurin had one of his worst games of the season, making only 4 of 14 shots.

It was Houston’s second straight standout defensive performance against a power conference champion. In the second round, they completely shut down Big Ten regular season co-champion Illinois in Pittsburgh.

Statistics for Houston in the 2022 NCAA Tournament

The Cougars have also gotten the job done on the offensive end, enabling them to win each NCAA Tournament game by double digits. Against Arizona, they shot 46 percent from the field and 45 percent from three.

Jamal Shead went only 5 of 16 from the field but still ended up with 21 points after scoring 18 against Illinois. Kyler Edwards continued his excellent NCAA Tournament by making five of nine threes as part of a 19-point night against the Wildcats.