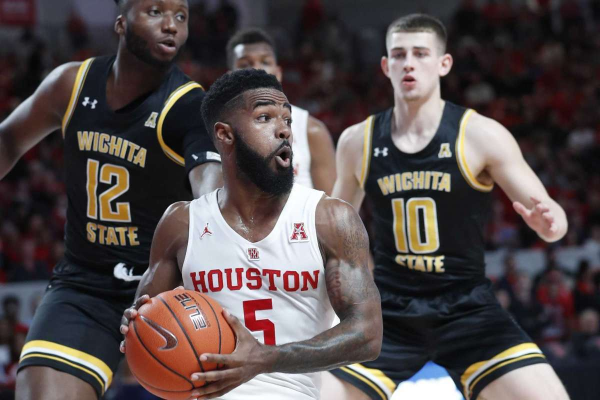 LSU heads to Houston to take on the Cougars who are off to their best start in over 50 years. Houston is 8-0 and nationally ranked, while LSU has suffered 2 losses in the early part of the season. LSU’s two losses came back to back vs. a ranked Florida State team and Oklahoma State. This 7-2 record looks pretty solid, but the rest of the LSU schedule is incredibly weak, and they lost to the two teams on their schedule with some sort of pedigree. The Florida State loss was only a 3-point loss though, which does signal that they can compete with good teams. Houston’s schedule is probably slightly better, and they have passed it with flying colors. They beat Oregon at home and they have double-digit road wins vs. BYU and Oklahoma State as well.

Houston is a two-headed monster in terms of their main scorers. Armoni Brooks and Corey Davis Jr. are both guards that average 16.5 points in just over 32 minutes a game. Brooks contributes more rebounds and Davis is a better passer, but both end up with pretty similar stat-lines most nights.  It’s rare that one of these two guys doesn’t lead the team in scoring. Another guard, Galen Robinson, also averages over 30 minutes for this Houston team, but after that, the Cougars aren’t completely committed to anyone in the frontcourt.

They run pretty deep rotations, playing 10 guys over 10 minutes a night if they are at full strength. Houston run pretty small most of the game, having 3 guys under 6’4 on the court at the beginning of the game. This is something that would typically worry me, but the have quality wins over pretty big teams, so it appears that they are able to just throw bodies at bigs throughout the game to keep them quiet to a degree. I think that the goal of this Houston team in this game is to force turnovers and take care of the ball. With the lineup they run out, they will naturally shoot better than a lot of teams from the outside. However, they could get taken advantage of on the low-post by a guy like Naz Reid. Houston definitely wants him to be in foul trouble early and then turn this game into an entirely guard dominant game.

LSU’s leading scorer is Skylar Mays, a 6’4 junior guard. Mays has been really efficient this season, shooting 53% from the field and over 43% from the 3 point line. He should play well over 30 minutes if this is a close game and he is the player that Houston will want to focus on first. Mays hasn’t been that willing of a shooter, even when he is shooting the ball well, including 7-9 and 8-11 in their 2 losses and being 8-12 in those games from the 3 point line. If I have any say, I’m yelling at this kid to shoot the ball more.

This is good news for Houston though. It is always very scary to run into a walking microwave on the court. A guy that you can face-guard all the way down the court to no avail at times. Given his tendencies this year, it appears that Mays only wants to take quality shots. This is a nice trait to have, but as the opposing team, it should be much easier to stop him than other star players. Play him tight and he will pass.

LSU also has a talented freshman forward in Naz Reid. Reid played 41 minutes in their biggest game yet, but he only contributed with 12 points, 2 rebounds, and a block. This again signals that this LSU team consistently wants to make the right play, but sometimes the best players need to be taking the most shots.

I want Houston (-3.5) here. I think that their depth should help them maintain LSU and force them into taking their best players out of the game. At Houston in a new building, I think Houston takes this one by close to double-digits.