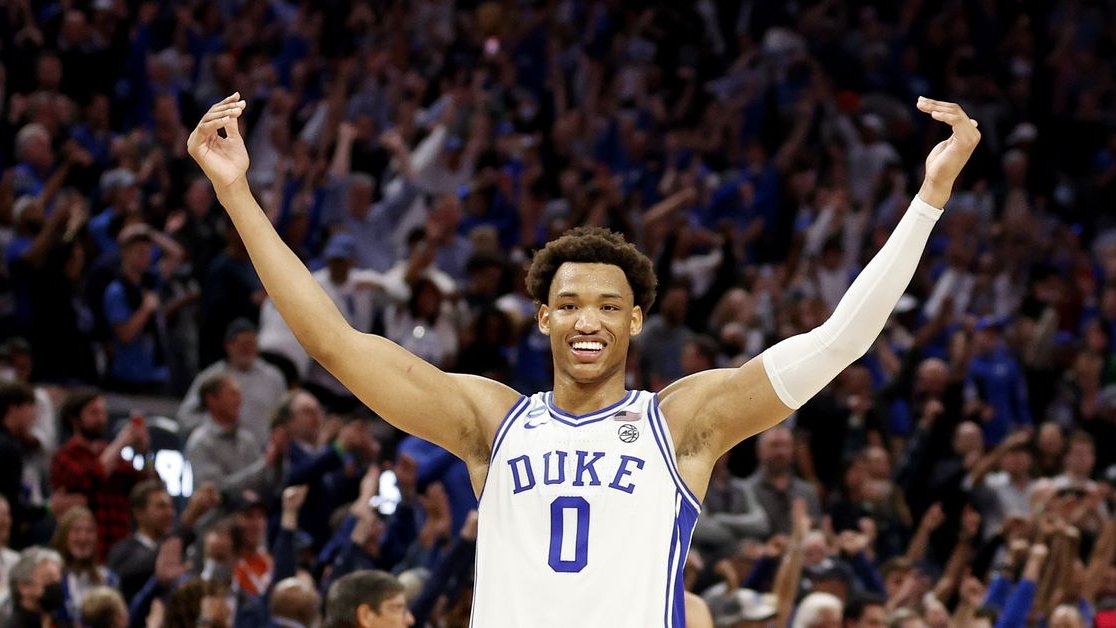 Will Coach K get the winning send-off that the Duke faithful are hoping for? The Blue Devils are three wins from sending out the legendary coach with a sixth national championship. To move within two wins, Duke has to see off Arkansas in the West Regional final in San Francisco.

This matchup between the second-seeded Blue Devils and the fourth-seeded Razorbacks will be the third time that Coach K has faced Arkansas while on a quest for a title.

In 1990, the two teams met in the Final Four in Denver. In that matchup, the Blue Devils won 97-83 before being blown out by UNLV in the championship game.

Four years later, they met for the title in Charlotte. It would prove to be one of the closer and more thrilling championship clashes in recent March Madness history. With under a minute left, Scotty Thurman hit a tiebreaking three to put Arkansas ahead, and the Razorbacks claimed the program’s first national title with a 76-72 win.

As they were in 1990, Arkansas is a #4 seed this year. To reach the Elite Eight, the Razorbacks pulled a stunning upset of Gonzaga, who was the tournament’s top overall seed and the favorite to cut down the nets in New Orleans.

Duke, meanwhile, booked their place in the regional final with a win over #3 seed Texas Tech, rallying in the second half and making big plays and big shots late just as they did against Michigan State in the second round.

While the officiating was certainly not at its best in Thursday’s matchup between Arkansas and Gonzaga, it takes nothing from how well the Hogs played against the Zags. Holding Gonzaga to only 68 points is no small feat, no matter what officiating issues occurred.

Entering the Sweet 16, the Bulldogs had been held to 75 or fewer points only four times this season: vs. Tarleton State (one of these things is not like the others, yes), Texas Tech, and Saint Mary’s (home and away). And they were actually 3-1 in those four games, while Arkansas was only 4-7 when scoring under 75 points this season.

Once again, Arkansas did not shoot well, making only 40.3 percent (29 of 72) overall from the field and 28 percent (7 of 25) from three. But they had an answer every time they needed to have one, never allowing Gonzaga to make the second-half run most would have expected.

Can Arkansas repeat that feat against Duke?

There were a lot of questions about the mettle and ceiling of the Blue Devils entering the NCAA Tournament, after they lost at home to rival North Carolina in Coach K’s final home game and dominated by Virginia Tech in the championship game of the ACC Tournament.

But they stepped up in big moments against both Michigan State and Texas Tech to keep the championship dream alive.

It certainly helps in such moments to be shooting the ball as well as they are right now.

Shooting Percentages for Duke in the 2022 NCAA Tournament

vs. Cal State Fullerton (First Round)

vs. Michigan State (Second Round)

Against Texas Tech, Duke shot 71 percent from the field in the second half, and they made their final eight shots. Their last missed shot from the field came with 8:56 remaining.

It also doesn’t hurt when your biggest talents step up in big moments, and they will need to again against Arkansas.

Jeremy Roach also came up big for Duke against both Michigan State and Texas Tech. Against Michigan State, he had two big baskets in the final minutes as Duke rallied from five down with five minutes left. And after Banchero’s late three against Texas Tech, Roach hit shots on each of the next two possession to put Duke ahead by five, putting the game beyond the Red Raiders’ reach. In the

Arkansas vs. Duke Prediction and Picks

Thus far in the NCAA Tournament, Arkansas has gotten by without shooting particularly well. Can they get away with that against Duke?

Getting Williams in foul trouble will be key for Arkansas. Duke has had some trouble this season when that has occurred, as mentioned in the Texas Tech-Duke preview. Both Michigan State and Texas Tech failed to do that, and Williams was able to produce in both games as a result.

The Blue Devils have scored 78, 85, and 78 in the NCAA Tournament without AJ Griffin really having a notable performance. He did hit three 3s against Texas Tech, but in the tournament, he is averaging only 9.0 PPG and shooting just 40 percent from the field and 35.3 percent from three, all below his season numbers.

So, we haven’t really even seen the Blue Devils at their best yet. If we see that in this matchup, Coach K’s retirement tour will continue on to New Orleans.

The 2022 French Open is underway at Stade Roland Garros in Paris, France, and we are already almost through the first week of play. Tomorrow, the remaining third-round matches will take place, after which the men’s and women’s singles draws will be down to their final 16 contenders. In both men’s and women’s singles, there END_OF_DOCUMENT_TOKEN_TO_BE_REPLACED