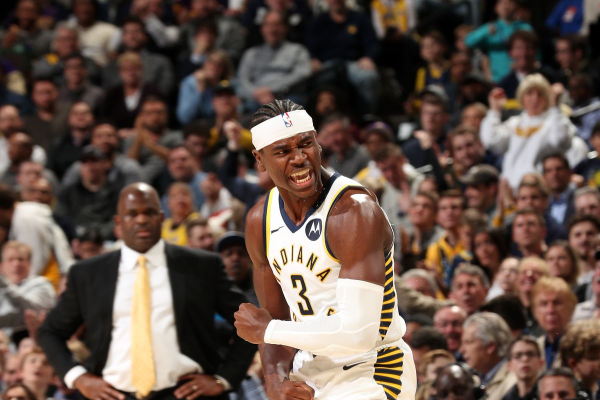 The Los Angeles Lakers walked into Indianapolis with the best record in the NBA, perhaps the greatest player in league history, and a flawless record outside of the Staples Center on Tuesday night. Yet all of that wasn’t enough to overcome an Indiana Pacers squad that’s ready to be counted as an Eastern Conference player.

It was a tightly contested game throughout, as no team outscored their opponent by more than four points in any quarter of play. After leading for much of the second half, the Pacers had to rally back from a 95-91 deficit in the fourth quarter after allowing nine unanswered points.

The contest was tied at 100 with just over two minutes remaining. The teams traded free throws to push the draw to 102, and then it was Malcolm Brogdon’s turn to lift his team.

With 36 seconds on the clock, Brogdon drove past Dwight Howard and scored a reverse layup to give Indiana the lead. LeBron James couldn’t get a three-point attempt to fall with just under 12 seconds to play, and another pair of misses from the Lakers kept the Pacers out of reach.

A frantic ending that didn’t include much scoring earned Indiana the 105-102 victory over Los Angeles.

Yes, the Lakers were without All-Star Anthony Davis, but this win marks another impressive notch on the belt of a Pacers team still without an All-Star of their own, Victor Oladipo.

Indiana is finally starting to pick up wins over some of the NBA’s top-tier teams, and that’s pushing it closer to the group of Eastern Conference contenders.

The Pacers may not have the star power or household names of Milwaukee or Philadelphia, but they’re starting to play quality basketball against quality opponents.

Against the visiting Lakers, forward Domantas Sabonis dropped a double-double with 26 points and 10 rebounds. Brogdon added another 14 points, two of which came in the final minute to give Indiana the lead.

With this victory, the Pacers are now riding a four-game winning streak that includes triumphs over the Lakers and Boston. Before defeating the Lakers 105-102, the Pacers went into Boston to take down the Celtics by a score of 122-117.

Indiana may not have the most prolific offense in the NBA, but it’s using its fifth-ranked defense (104.2 ppg allowed) to string wins together.

While everyone in the Eastern Conference is looking up at the 24-4 Bucks, the Pacers are now part of the group of five teams ranging from four to five games back of Giannis Antetokounmpo’s team.

It’s no surprise to see Giannis and company are the favorites to win the Eastern Conference with odds of +150. On top of having the reigning MVP, the Bucks have opened up a four-game lead over the closest team in the conference.

It’s also not a shock to see a loaded Philadelphia team hot on Milwaukee’s heelswith odds of +220 to win the East.

What is surprising is the fact that Indiana remains tied with Brooklyn with odds of +2100 despite notching wins over the Celtics and Lakers and owning a significantly better record than the 15-12 Nets.

It appears that the Pacers are yet to gain respect as a real threat in the Eastern Conference, but that could soon change.

After a game against Sacramento on Friday, Indiana will go on a five-game stretch in which it plays Milwaukee, Toronto, Miami, and Philadelphia. A contest in New Orleans precedes the Philly game.

If the Pacers can manage to earn victories in two or three of those contests against the top teams in the Eastern Conference, it will be time to start taking Indiana seriously.