Indiana Tops Celtics; Are The Pacers Contenders In The East? 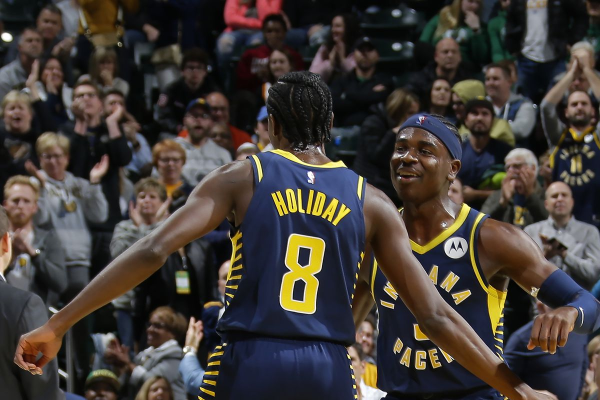 The Eastern Conference started the season as a two-team race. Through roughly 25 games of the NBA season, you’d be hard-pressed to count out any of the six teams that have earned 16 wins or more thus far.

The latest team to show that it isn’t to be overlooked is the Indiana Pacers, who took down the Boston Celtics with a huge fourth quarter Wednesday night.

In a contest that felt like an entrance exam into the group of contenders in the Eastern Conference, Indiana faced an uphill battle with a 10-point deficit after three quarters of play. By outscoring Boston 38-23 in the fourth, the Pacers took down the team with the third-best record in the conference.

Malcolm Brogdon ended the evening with a team-high 29 points on 6 of 10 shooting from the field. In addition to hitting all 15 of his free throws, Brogdon pitched in with eight assists.

From the bench, Aaron Holiday and Justin Holiday combined for 35 points, 20 of which came in the Pacers’ big fourth-quarter rally.

And perhaps the best news of all is that Indiana got the job done without All-Star Victor Oladipo, who’s been out since January with an injury but may be back soon. The Pacers have proven themselves worthy of Eastern Conference recognition, and they’ll aim much higher once their best player is back on the court.

Where Indiana Fits Into the Mix

Thus far, MVP candidate Giannis Antetokounmpo has his Milwaukee Bucks well out in front of the Eastern Conference pack with a record of 22-3. The Bucks are the clear favorites right now, but the picture gets very muddled if you look down any further.

After Milwaukee, five Eastern Conference teams have between 16 and 18 wins so far this year. With its victory over Boston, Indiana just joined this group.

Currently sitting in second place is 18-6 Miami, which trails Milwaukee by 3.5 games. Following the Heat are the 17-6 Celtics and the 18-7 76ers, both of whom are four games back of the Bucks.

In fifth place is 16-8 Toronto, followed immediately by 16-9 Indiana. The Pacers are six games back of the Eastern Conference leaders, who also happen to play in the same division.

The conference then drops off after Indiana, indicating that we have a six-team race on our hands.

Everyone is chasing Milwaukee, but nobody would be eager to play any one of these six squads if the playoffs started today.

On the negative side, Indiana’s win over Boston was just its first victory over a quality Eastern Conference opponent. On a positive note, the Pacers have earned their place in the discussion without Oladipo, who averaged 23.1 points per game in his last full season.

If Oladipo can come back from his injury and slip right into the team that’s currently ranked sixth in the NBA in points allowed (105.2 ppg), this Pacers team can be very dangerous come playoff time.

Do the Odds Give Indiana A Chance?

According to the odds, two teams are heavy favorites to win the Eastern Conference. Yet the sharpest dropoff comes between the seventh and eighth-ranked teams.

Where do the Pacers fit in?

Interestingly, Indiana is tied with 13-11 Brooklyn at +2100 to win the Eastern Conference. The big gap that leads to +5000 Orlando would indicate that there are actually seven teams in contention for the conference title.

So, Indiana may not be getting the respect it deserves at this point in the season, but it’ll surely begin receiving better odds if it starts racking up wins against other Eastern Conference contenders.