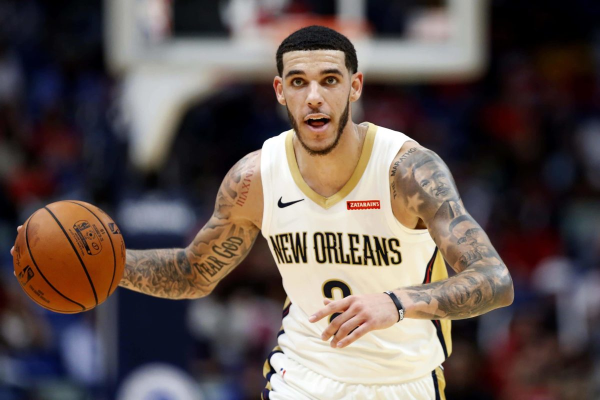 Christmas Day is finally here, and that means we have one of the best fantasy days of the year with a five-game NBA slate that spans over 12-plus hours with some marquee matchups throughout the day. The slate doesn’t have a ton of injury news, but I do think that there are a few spots to take advantage of on the slate.

The point guard position presents my favorite play on the slate, but first, let’s talk about a pay-up option or two that I like on this slate. The Raptors guards, Kyle Lowry and Fred VanVleet, are two of the best plays on the slate in what projects to be a very competitive game against Boston. Both players have flashed multiple times since the injuries to Pascal Siakam, Norman Powell, and Marc Gasol.

I expect at least one to vastly exceed his salary level, and I think that they are very capable of being on the winning lineup together with their minutes and usage rates recently. I will struggle to make a lineup without one of these players at their prices.

Lonzo Ball is currently the best play on the slate on most sites where he is too cheap. Ball started the last game late at night, and he got in significant foul trouble in the first half. I expect Ball to play 30-plus minutes in this game, and Ball is basically a 1 FPPM scorer. I hope that some of this slips through the cracks because of the lack of minutes upside in the game logs.

Lou Williams is too cheap on this slate, and I love his upside for the price tag on all major sites. Willams is very scoring dependent, but the Clippers’ new additions have taken away fewer opportunities than you would think because they are not focused on staggering the minutes of Paul George and Kawhi Leonard. When Williams is on the floor, he has the opportunity to shoot as many times as he wants.

Giannis Antetokounmpo is my favorite spend-up option at any forward position because of his history against the 76ers. I am somewhat hesitant to label Giannis as the 76ers killer with the new addition of Al Horford in the offseason, but Giannis has been absolutely phenomenal in this matchup recently.

Rondae Hollis-Jefferson has gotten a significant uptick in minutes recently with multiple injuries for the Raptors, and I think that he is a great spend-down option on a slate full of studs. Hollis-Jefferson is very versatile and can find his way onto the court at many positions and produce without scoring a lot.

Joel Embiid is my second favorite spend-up on the slate facing off against Giannis and the Bucks on national TV. Embiid loves these national games, and he is sure to get up for this matchup.

Last season, in three matchups vs. Milwaukee, Embiid had 70.3, 78.8, and 84.3 fantasy points against a very similar frontcourt to the one the Bucks will be rolling out on Christmas Day. To make those numbers even better, Embiid did not shoot over 50 percent in any of those three games, meaning that he has just feasted in every aspect against this team.