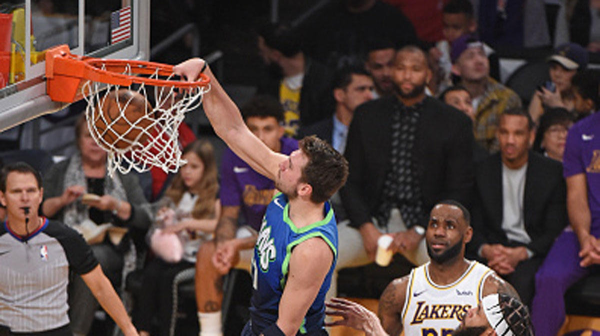 The Dallas Mavericks are making the transition from good to great, and it’s nearly all because of their MVP candidate, Luka Doncic. Yet even Doncic needed some assistance Wednesday night.

On a night when Doncic was far from his best, Dallas was able to earn a 121-114 win over the visiting Timberwolves. The victory marked the Mavericks’ fourth win in a row, and their ninth win out of their last 10.

For the first time in 16 games, Doncic didn’t end the contest as Dallas’ leading scorer. Instead, it was Dwight Powell, who put up a career-high 24 points while shooting a perfect 9-for-9 from the field to lead the Mavs.

In addition to Powell’s 24, Jalen Brunson put up 16 points, 14 of which came in the fourth and final quarter of play.

Doncic only mustered 22 points, seven rebounds, and six assists, so the Mavericks needed help from the rest of the roster on a night when their star man didn’t have a full tank on the second night of a back-to-back.

With those peripheral players stepping up, the Mavericks were able to overcome the likes of Karl-Anthony Towns (26 points), Andrew Wiggins (26 points), and the rest of the Minnesota team.

In addition to extending Dallas’ winning streak, this victory served as the 17th-straight game in which Doncic has put up at least 20 points, five rebounds, and five assists.

With his MVP-level numbers, Doncic is the first 20-year-old warranting the label “superstar” since LeBron James. Sure, Luka is in his sixth professional year of basketball, though only his second in the NBA.

Either way, very few people can do what Doncic is doing this year, and every single one of them are several years his senior.

And when compared to 20-year-old LeBron, Doncic surpasses his childhood idol.

So, rather than comparing Doncic to other NBA legends at 20 years old, the fairer judgment of Doncic’s play is against the other MVP candidates. Compared to the other leading MVP candidates, Doncic holds up extremely well.

Among the top four candidates, Doncic is third in scoring behind James Harden (39.5 ppg) and Giannis Antetokounmpo (31 ppg), second in rebounds behind Giannis (13.2 rpg), and second in assists behind LeBron (10.8 apg).

As an all-around player, it’s very difficult to argue that anyone other than Giannis is doing more when you take into account every facet of the game. Doncic is averaging far more rebounds and assists than Harden, and far more points and rebounds than LeBron.

And for the icing on the cake, Doncic is the only MVP candidate with a shot at averaging a triple-double at this point in the season.

With an incredible run of individual performances, Doncic has skyrocketed up the list of odds to win this year’s MVP Award.

Right now, Doncic finds himself in a group of four players who’ve separated themselves from the pack in the MVP race, with Anthony Davis on the bubble with the fifth-best odds of +1200.

The current favorite to win MVP is Giannis, who owns odds of +180. But Doncic is right on his heels after surpassing both Harden and James.

In order to catch Giannis, Doncic will likely need to keep up his pace of 30-plus points per game and find a way to average a triple-double for the year, all while leading Dallas to a strong playoff seed.