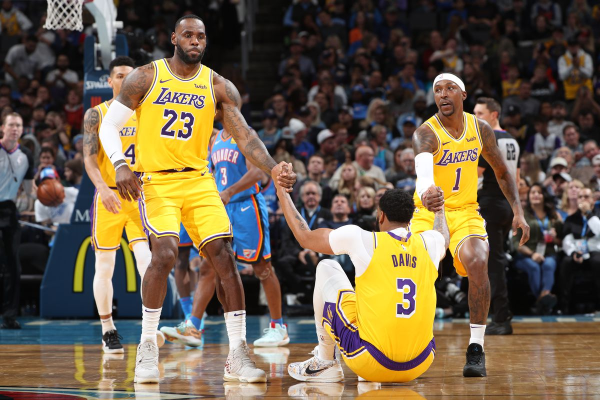 Anthony Davis was expecting boos from his former home crowd as the All-NBA big man and his Los Angeles Lakers made the trip to New Orleans for a showdown with the Pelicans. Boos are exactly what Davis received.

It all started when one fan took the opportunity to be heard as the crowd hushed in anticipation for the national anthem, yelling, “AD’s a sellout!”

While Wednesday night marked the first time Davis would play in New Orleans’ Smoothie King Arena whilst wearing the away team’s jersey, it wasn’t his first time getting booed by the crowd. After requesting a trade during last year’s season, Davis was booed in his first game back on the Pelicans.

According to Davis, that sort of previous treatment helped him deal with the booing that rained down on him before and throughout his return to his former city.

It’s fair to say Davis handled the booing well, as the big man dropped a game-high 41 points and helped the Lakers to a 114-110 win on the road.

For icing on the cake, Davis capped off the win with a steal on an inbounds play in the game’s dying moments. He would overcome the 40-point mark by hitting three of four free throws in the final 5.3 seconds of play.

Not All Hostility in Davis’ Return

The fans in Smoothie King Arena were sure to let Davis know that he’s no longer welcome in the crescent city. In fact, viewing LeBron James as a co-conspirator in Davis’ exit from New Orleans, they were more than happy to boo him, as well.

However, fans are one thing, and the people within the organization are another.

After the game, Davis was sure to find time to visit with his former teammates. Although he didn’t appear to be comfortable entering the Pelicans’ locker room, especially whilst still in uniform, New Orleans coach Alvin Gentry persuaded him to come in and speak with his old friends.

In addition to visiting with team security guards and other personnel within the organization, Davis was sure to make time to deliver a pair of gifts. Davis brought two signed jerseys with him, one of which was for the nephew of a security guard, and the other for close friend JrueHoliday.

It appeared to be a perfect night for Davis, who scored 41 points in a win and survived his first game back in New Orleans as a member of the Lakers.

While the search for this year’s Most Valuable Player will be difficult enough, finding the MVP of the Lakers might even be a more difficult task.

With 41 points against his former team, Davis showed that he’s still one of the most dominant players in the league, and has the ability to lead Los Angeles to victory. But is he more worthy of the MVP award than James?

Let’s compare their numbers at this point in the season.

Very little separates these two on the floor, so let’s see how they stack up against the league’s other stars.

Although James and Davis are fourth and fifth on the list of players with the best odds to win this year’s MVP, there’s a significant gap between them. While James owns odds of +550 to win the award, Davis is sitting on +1200 odds.

Ahead of the Los Angeles duo is a trio of players. Giannis Antetokounmpo leads the way with +195 odds of winning MVP, followed by James Harden (+460) and Luke Doncic (+460).