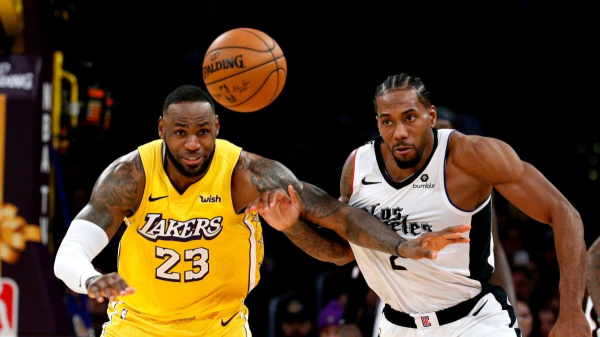 Christmas Day was set up to be a perfect opportunity for the Los Angeles Lakers. With a win, LeBron James and company would have tied the season series with the LA Clippers while extending their lead in the Western Conference.

Instead, the Clippers rallied back from a 13-point second-half deficit to remain undefeated against their Pacific Division rival, and now James is set to miss time after aggravating an injury.

James entered the Christmas Day contest with a groin issue that caused him to miss the team’s game with Denver just three days earlier. Although he would finish the game out, James aggravated that groin injury in the first quarter while taking a charge from Clippers guard Patrick Beverley.

Against the Clippers, James was able to put up 23 points, 10 assists, and nine rebounds, but he shot just 16.7 percent from beyond the arc.

According to James, the aggravation of the injury “kind of set me right back to where I was five days ago.”

So, instead of showing they could beat the Kawhi Leonard and Paul George-led Clippers, the Lakers dropped their fourth straight game and are now likely to be without James for some time.

James is officially listed as day-to-day on the injury report.

Lakers Trying To Hang On To Lead

After a Dec. 15 win against the Hawks, the Lakers were flying high. The men in purple and gold had built another seven-game winning streak and owned a healthy lead atop the Western Conference standings.

Now, the Lakers are riding a four-game losing streak with tough losses against the other two favorites to win the NBA Finals – the Bucks and Clippers.

That stretch of defeats has also allowed the field in the Western Conference to gain ground on the leaders, who now own between a two- and 3.5-game lead over the Clippers, Nuggets, Rockets, and Mavericks.

For now, the 24-7 Lakers still own the best record in the conference. However, the 21-9 Nuggets are hot on their heels and the 23-10 Clippers are closing in thanks to a perfect 2-0 record against James and company.

With James dealing with an injury, the Lakers are likely to be without their leader for a back-to-back set against Portland and Dallas that begins Saturday.

If Anthony Davis and Kyle Kuzma aren’t able to lead the Lakers to a victory in at least one of those contests, the Lakers could watch their lead in the Western Conference evaporate entirely.

James could be eying a return to the floor after the Lakers’ two-day break leading up to a New Year’s Day game at home against Phoenix.

The Lakers looked like the best team in the NBA for a solid stretch of the season. Then, some moderate injuries and a four-game losing streakpulled them back down to reality.

What’s even more worrisome for Lakers fans is that this team has feasted on lesser competition while racking up losses to some of the best teams in the league – the Bucks, Clippers (twice), Raptors, Mavericks, Nuggets, and Pacers.

That record doesn’t exactly bode well for a team that’s likely to play at least two of those teams in the Western Conference playoffs before getting to another in the NBA Finals.

So, are the Lakers still a favorite in the Western Conference? What about to win the NBA Finals?

According to the odds, this losing streak and the aggravation of James’ groin injury isn’t hindering the Lakers’ chances of winning either.

To win the Western Conference, the Lakers are tied with the Clippers at +190. There’s a significant gap before getting to the Rockets, who own the third-best odds of winning the conference at +600.

And when it comes to winning the NBA Finals, the Lakers are once again tied with the Clippers with odds of +320. The two Los Angeles teams trail only the Bucks (+300), who are the favorite to win it all.