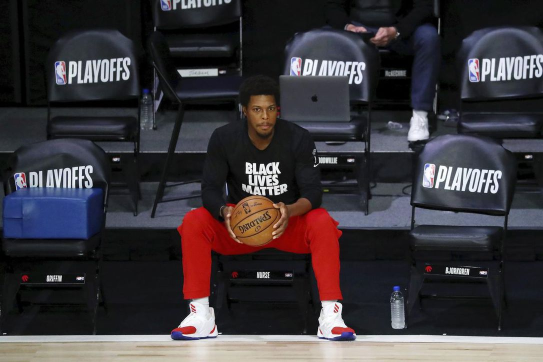 Round 2 of the NBA Playoffs will be underway in the bubble down in Orlando soon enough. The Toronto Raptors could be without one of their best players and leaders in Kyle Lowry.

Lowry was forced to leave Game 4 of Toronto’s series against the Brooklyn Nets due to a foot injury. The Raptors announced on Monday that Lowry had suffered a left ankle sprain.

The Raptors will be going up against the Boston Celtics in the 2nd round with the series kicking off on Thursday. This will allow for Lowry to get some rest in.

Now the Raptors are a talented team. Even without Lowry, the team still has some dynamic big men in Pascal Siakam and Serge Ibaka. With Boston struggling in the paint, these two could put up some big numbers against the C’s. Also Fred VanVleet is another solid guard.

The Raptors will be the favorites in the series. Even without Lowry this is probably going to be the case. Right now FanDuel has the Celtics at +1.5. With Lowry’s status in question, it might be worth it to throw some money on the C’s.

Jayson Tatum has been amazing so far for the team. He has been scoring at an epic rate scoring 30-plus points in the first two games of Round 1.

Also we have seen Kemba Walker step up as well. Celtics fans didn’t really know what to expect from Walker due to his knee issues. His minutes were restricted in the seeding games. Now that Celtics coach Brad Stevens has taken that restriction off, Walker has been balling out. Each game he has improved with his latest game being a masterpiece. IN Game 4 he grabbed 32 points as well as 4 rebounds and 4 assists.

If Walker and Tatum can continue to play as they did in the 1st round, Boston will be a tough team to beat. Especially due to the fact that Lowry could miss some games for the Raptors. Also opponents can’t forget about Jaylen Brown who is always there when Boston needs them.

So, the Celtics still might be the underdogs, but taking them to win the series early on wouldn’t be too bad of a pick.