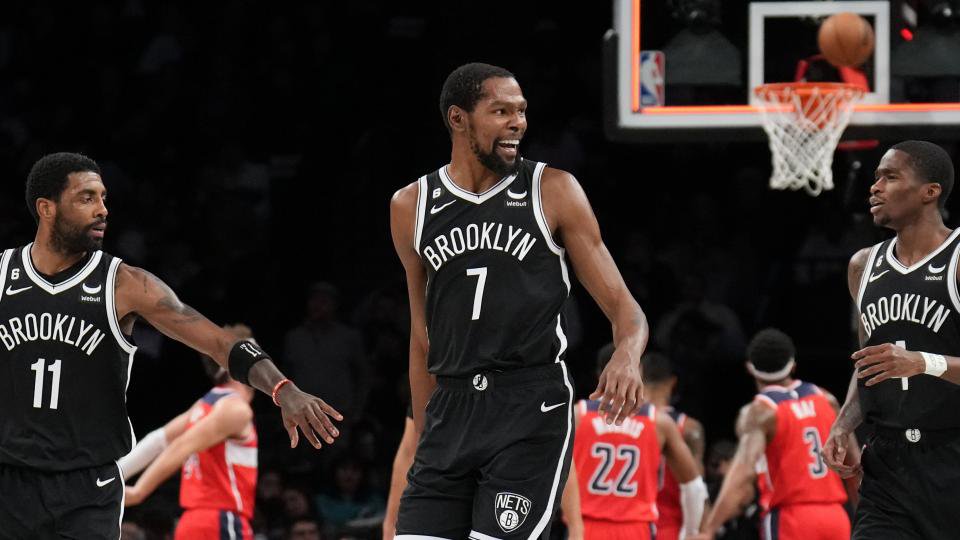 Tonight, the hottest team in the NBA will face off with the league’s best team–record wise, at least–as Kevin Durant, Kyrie Irving, and the Brooklyn Nets host Giannis Antetokounmpo and the Milwaukee Bucks.

After a slow start, the Nets are now on fire, having won seven straight and 11 of 12. On Wednesday, they routed the Golden State Warriors 143-113, in a game in which they astoundingly led 91-51 at halftime.

Milwaukee lost at Cleveland on Wednesday, but the Bucks are 7-3 in their last 10 games and are a half-game up on the Boston Celtics, who they face on Sunday, for top spot in the East entering tonight’s games.

Who will take the win tonight at Barclays Center? Read on for our Bucks vs Nets prediction, as well as our Milwaukee vs Brooklyn betting picks and player props.

If you’re into some NBA Same-Game Parlay action, you can receive some extra cash at BetRivers. If you place three or more SGPs in a week, you will get a free $10 bet.

Not bad, if you ask me, especially when you can easily knock out that SGP trio on a busy NBA night like tonight, which features a 14-game slate.

Game odds are via FanDuel as of Friday, December 23, 2022, at 1:30 pm ET. This article may also include odds from our other recommended legal sports betting sites.

Will the Bucks Successfully Bounce Back from a Loss Yet Again?

When last yours truly backed the Bucks, it was in a similar situation as what they are facing tonight.

In that matchup, they were facing the Utah Jazz after being blown out by the Memphis Grizzlies. And even without Giannis and Khris Middleton, Milwaukee routed Utah 123-97, led by a big game by Bobby Portis (22 points, 14 rebounds).

They aren’t coming off of a 41-point loss this time around, but they were fighting an uphill battle for the last three quarters of Wednesday’s 114-106 loss, with the Cavs up 15 after a quarter.

To their credit, Milwaukee did fight back mightily after trailing by as many as 24 in the third quarter, pulling within five with over two minutes left before managing just two points the rest of the way.

Giannis scored a season-high 45 points in Cleveland, his second straight 40-point game and fifth this season. One of the five came in his previous matchup with the Nets, a 43-point, 14-rebound, five-assist effort in the Bucks’ 110-99 win in Milwaukee on October 26.

A third straight 40-point effort would position the Bucks well to continue an excellent trend of rebounding well from their losses.

The aforementioned win over Utah was their seventh in eight games following a loss this season. They haven’t faced a team as good as Brooklyn in any of those games, but two have come over the Cavs, who are third in the East, a game behind the Bucks and a game and a half ahead of the Nets.

In addition to the trend mentioned above, the Bucks have owned the Nets recently, winning six of their last seven regular season meetings. In all but one of those meetings–the most recent one–the Bucks have scored at least 115 points.

Giannis relishes these kinds of games, so there’s a good chance he could have a third straight 40-point game.

At the very least, he should hit the 30-point mark, and a 19th double-double of the season is likely as well.

Here are his regular season performances against the Nets since Kevin Durant and Kyrie Irving moved to Brooklyn:

So, six times he has gone over 44.5 points + rebounds, which is the number you can find at both Caesars Sportsbook & BetMGM.

Also, all six times he has also gone over either of the points + rebounds + assists total you will find for tonight (over 49.5 at Caesars Sportsbook & BetMGM and over 50.5 at FanDuel and BetRivers).